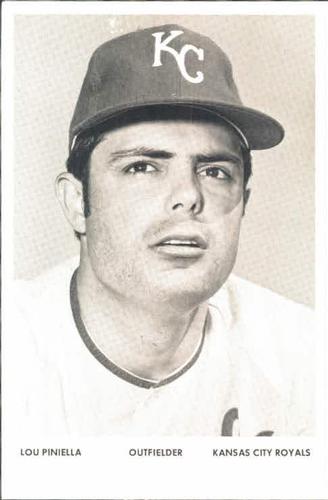 Have you ever heard of making four outs in a baserunning cycle? On April 16, 1970, the Kansas City Royals played the Milwaukee Brewers in the Royals’ first road game of the campaign, before an announced crowd of 7,110 (including 974 Ladies’ Day fans).1 The season was just a few games old, and neither team was off to a good start. (The Royals were in their second year as an expansion franchise, and the Brewers were in their first, having replaced the ill-fated Seattle Pilots.

On this day, the “distinguished performances”2 of veteran Kansas City pitcher Moe Drabowsky and rising offensive star Lou Piniella paced the Royals to an 8-6 victory over the Brewers. The 34-year-old Drabowsky, who had pitched for the Milwaukee Braves in 1961, was a force in the Kansas City bullpen. The Royals’ left fielder, Piniella, had won Rookie of the Year honors in 1969, and after only five games in 1970 he was batting .389 and had an OPS of .984. He had a good day at the plate this day, but his baserunning made history in a negative way, being thrown out or picked off at every base, a “cycle” of sorts.

In the top of the first, Piniella reached on an error by Brewers third baseman Max Alvis, loading the bases with two outs. (Ed Kirkpatrick and Amos Otis had walked.) Luis Alcaraz followed Piniella with a double to left field. Kirkpatrick and Otis scored easily, but Brewers outfielder Danny Walton threw to shortstop Ted Kubiak, who relayed a strike to catcher Jerry McNertney and Piniella was gunned down at the plate for the third out of the inning. The Royals led 2-0.

In the second inning, the Brewers’ Wayne Comer reached on a two-base error by right fielder Pat Kelly and scored on a single by Alvis, cutting the Kansas City lead to 2-1. In the Kansas City third, Kelly singled, stole second, and went to third on a single by Kirkpatrick. Kelly scored on Otis’s single. Bob Oliver struck out, then Piniella drove a pitch 415 feet into the left-field bleachers,3 driving in three runs. It was his first home run of the season. The Royals now led 6-1.

Milwaukee’s Steve Hovley drove in Tommy Harper with a double in the bottom of the third, but Kansas City came right back against reliever John Gelnar in the fourth on a two-run single by Otis. In the bottom of the inning, Greg Goossen hit a home run, and at the end of four innings, the Royals led 8-3.

Piniella’s next at-bat came in the fifth inning, and he hit a leadoff single to right. The next batter, Luis Alcaraz, grounded back to the third Brewers pitcher, George Lauzerique, who threw to second, forcing Piniella.

Brewers catcher Jerry McNertney drew a two-out walk in the bottom of the fifth and Danny Walton followed with his fourth home run of the early season, cutting Kansas City’s lead to 8-5.

In the top of the seventh inning, Piniella singled to left field with one out. Alcaraz followed with a single to right field, moving Piniella to third. With Royals shortstop Jackie Hernandez batting, Piniella was picked off by McNertney, who fired to third baseman Max Alvis for the tag. In the home half, Milwaukee got a run when Hovley singled to right field, went to second on a wild pitch by reliever Roger Nelson, advanced to third on a fly ball by McNertney, and scored on a single by Danny Walton. Drabowsky relieved Nelson, and after walking pinch-hitter Russ Snyder, he retired the last seven Brewers batters he faced to earn his first save of the season.

Piniella came up to bat once more, in the top of the ninth. With Bob Oliver on first (hit by pitch) and no outs, Piniella grounded to second baseman Tommy Harper, who threw him out at first. Thus the Kansas City outfielder had been thrown out at every base in this game. But the Royals held on to beat the Brewers, 8-6.

Despite its oddity – he was the first player to be thrown out at each base in a game – Piniella’s baserunning drew little attention. Neither the Milwaukee Journal4 nor the Kansas City Star5 mentioned it.

The game lasted 3 hours and 5 minutes, and there were four errors committed in this contest, three by Milwaukee.

Piniella had hit a home run and two singles, and he raised his batting average to .435 and his OPS to 1.157. He went 3-for-5 with one run scored and three runs batted in. In his last 20 at-bats, he had 10 hits. Teammate Amos Otis was 2-for-4 with three RBIs. Pat Kelly, Luis Alcaraz, and Ellie Rodriguez added two hit each. Kansas City had 11 singles among its 13 hits. Bill Butler pitched five innings for the win and Lew Krausse took the loss for Milwaukee, lasting only three innings.

The next season, on August 3, 1971 (a Kansas City 7-5 loss to Oakland), Piniella made three outs on the bases. He was thrown out in the fourth and eighth innings trying to stretch a double into a triple. In the fifth inning he singled and went to second on an outfielder’s throw to the plate. The next batter singled, and Piniella was thrown out at the plate trying to score. Sweet Lou had gone 4-for-4 in the game but had made three base-running outs in that game. The only at-bat in which he was not thrown out running was his first, when he singled to left with two outs and was stranded when Chuck Harrison struck out.