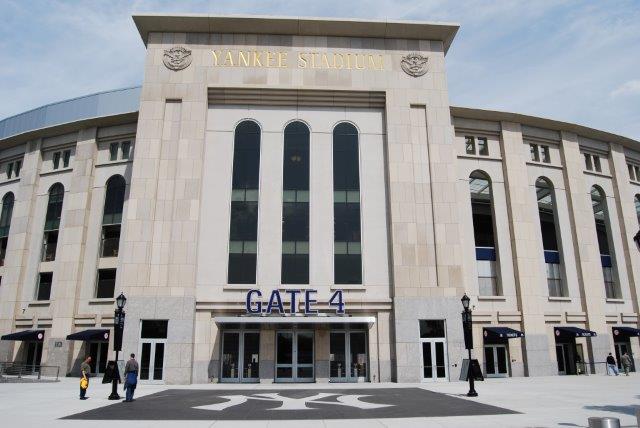 A new era dawned in New York on April 16, 2009. The second version of Yankee Stadium was set to open its gates just across the street from its predecessor in the Bronx. The original stadium opened in 1923 but was completely modernized for the 1976 season.  The Yankees played in Shea Stadium for the 1974 and 1975 seasons. The new structure had a tough act to follow. The House that Ruth Built, or, more accurately, the House that Colonel Jacob Ruppert Built, had hosted more World Series games than any other major-league ballpark. Since 1923 the Yankees had appeared in the postseason 44 times, won 37 pennants and captured 26 world championships.

But the winning was only part of the mystique. The ballpark’s architecture, including the frieze that hung from the roof, as well as Monument Park, were physical distinctions that set the grand old park apart from the other ballparks. The new Yankee Stadium had many amenities, including three close-captioned scoreboards and an enormous clubhouse for the home team. The New Yankee Stadium cost the organization $1.6 billion to build. Every attempt was made to duplicate the look of the old ballpark, which now cast a shadow over the newer venue. But would the mystique carry over? Would the Yankees be able to continue enjoying their home-field advantage? “It still has that feel because the park still looks kind of like the old Stadium,” said New York pitcher C.C. Sabathia. “But it’s a weird feeling, too, going out with a clean slate and us starting a new era of Yankees baseball.”1

“I think they’ve got too much room in the clubhouse,” said Yankees legend Yogi Berra. “It’s an awfully big locker room. To me, if you want to talk to a guy, you’ve got to walk half a mile.”2

“It’s beautiful,” said Yankees owner George Steinbrenner.3 Those who entered the stadium through Gate 2 were greeted by a life-size bust of The Boss. Ticket prices ranged from $5 in center field to the premium seating behind home plate, stretching from dugout to dugout, which cost up to $2,625 a seat. “Everything is moving very well, including the premiums,” said Yankees President Randy Levine. “The only effect of the recession is some of the highest-priced seats aren’t selling as well.”4

The pregame festivities included a performance by John Fogarty, and Kelly Clarkson sang the national anthem. Berra threw out the ceremonial first pitch, the seventh time he had done so on Opening Day. The pitching matchup was between the last two American League Cy Young Award winners. For Cleveland, Cliff Lee was coming off a superb 2008 campaign. The southpaw went a league-leading 22-3 with a 2.54 ERA. Lee had the honor of being named the starting pitcher for the AL in the All-Star Game, which was held at old Yankee Stadium. However, in 2009 he was off to a rough beginning (0-2, 9.90 ERA). Sabathia also won his Cy Young Award with Cleveland, in 2007. He was traded to Milwaukee in midyear and led the Brewers to their first postseason since 1982. The big left-hander went 11-2 with a 1.65 ERA, and also belted a home run.

Sabathia retired the side in order to start the game. When Yankees leadoff hitter Derek Jeter came to the plate, a bat was lying across home plate. It was said to be one that Babe Ruth used in 1923 on the day that old Yankee Stadium opened. On that day Ruth homered as the Yankees beat Boston, swept the four-game series, and won their first World Series.

Although the scoreboard showed a 1-1 deadlock, both hurlers were struggling. But they were supported by their clubs in the field to keep the score tied. Through five innings Cleveland stranded seven baserunners, while the Yankees had marooned 10.

With two out in the top of the sixth inning, New York manager Joe Girardi went to his bullpen. Sabathia had thrown 122 pitches, walking five and striking out four. “It was a little frustrating to get such a high pitch count,” he said after the game. “I need to probably make a little better pitches with two strikes. They did have some good at-bats, but I just wasn’t making pitches with two strikes — good, quality pitches — to get them out.”5

The Opening Day party came crashing down for the Yankees in the top of the seventh inning. Cleveland scored nine runs, lambasting relievers Jose Veras and Damaso Marte, and took a 10-1 lead. The Indians sent 12 men to the plate and hit two doubles and two home runs as part of the rampage. Grady Sizemore smacked a grand slam and Victor Martinez had a solo shot. Both homers came off Marte. The Indians’ outburst sent many of the 48,271 fans scurrying to find the exit signs.

“CC has been a good friend and a teammate for so long that it’s tough to see him out there with the ball coming at you,” said Sizemore. “That first at-bat was a little uncomfortable. I didn’t know what to expect.”6

“I have no words to describe the feeling,” said Martinez of facing his old batterymate.7

New York scored a rather meaningless run in the bottom of the seventh inning. The final score was Cleveland 10, New York 2. “It’s not how you want to start out a new stadium,” said Girardi. “But one game is not going to make the history of this Yankee Stadium and this year.”8

Lee (1-2) was the winner. He went six innings, threw 115 pitches, walked three, struck out four, and gave up one earned run. Veras (0-1) was tagged with the loss. Indeed, Girardi was correct. The Yankees won the AL East in 2009, swept Minnesota in the Division Series and disposed of Anaheim in six games in the Championship Series.

An interesting turn of events came to pass in the World Series. Cleveland had traded Lee to Philadelphia at the trading deadline, and Lee helped to lead the Phillies to their first fall classic since 1993. In Game One of the World Series, Lee faced off against Sabathia again at Yankee Stadium. Lee was the winner again as the Phillies won, 6-1.

The author accessed Baseball-Reference.com (baseball-reference.com/boxes/NYA/NYA200904160.shtml) for box scores and other data, as well as retrosheet.org (retrosheet.org/boxesetc/2009/B04160NYA2009.htm).

2 Jack Curry, “An Emotional and Quiet Steinbrenner Is Greeted with Applause and Praise,” New York Times, April 17, 2009: B14.