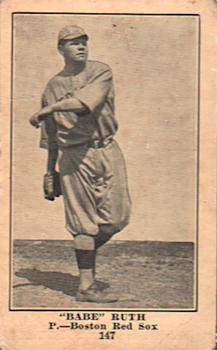 The first series of the 1916 season between the Washington Senators and the Boston Red Sox began on April 17. The Red Sox were the defending champions, coming off a four-games-to-one mastery of the Philadelphia Phillies in the 1915 World Series. The Senators, perennial residents of the second division from 1903 through 1911, had begun some moderate success and were fourth in the 1915 American League, 17 games behind Boston.

The first Senators-Red Sox matchup was also the first time in the new season that Ruth, Boston’s young left-hander, met Johnson, generally considered the game’s greatest pitcher. Ruth had finished 1915, his first full season in the major leagues, with a record of 18 wins and 8 losses with a 2.44 earned-run average. Johnson had finished 1915 with a league-leading 27 wins – the sixth straight season he had won 25 or more games – and 35 complete games, 7 shutouts, 203 strikeouts, and a 1.55 earned-run average, placing him second behind Ruth’s teammate Smoky Joe Wood at 1.49.1 In the first-ever meeting between the two, on August 14, 1915, Ruth had come away with a 4-3 win over Johnson.

This result was the same. Stanley Milligan, baseball writer for the Washington Post, mourned, “Boston, the home of the baked beans and hard-hitting ball player, will be the scene of another world’s series provided the Red Sox show the punching proclivity during the remainder of the year that they did at Fenway Park this afternoon. … Whatever Walter Johnson partook of for luncheon evidently didn’t set right, for he collapsed in this ballgame like a man who was suffering from ptomaine poisoning.”2

Another Washington writer and a Boston scribe were more circumspect, centering on the iffy weather but crediting the home team’s efforts against Johnson. “The game only lasted eight innings for the reason that it started to rain in the fifth, and everybody, including both umpires were soaked to the skin in ten minutes. Every reason in the world why a ball game should be called,” wrote the Washington Herald’s man.3 “As pretty a hitting bouquet as the fans ever have seen against Johnson and the enthusiasts who were unwilling to take a chance on the weather made a mighty bad guess,” the Boston Globe reported.4

With 3,132 Monday-afternoon fans in the Fenway seats, Ruth set Washington down in order in the first inning. Johnson’s day did not start off as well. He got Harry Hooper to fly out but then allowed consecutive doubles by Everett Scott and Dick Hoblitzell that resulted in Boston’s first run. Johnson bore down and got the next two batters, and the inning ended with Boston leading 1-0.

In the second inning, Ruth allowed a one-out single to Rip Williams, while Johnson set Boston down in order. In the top of the third inning, the Boston southpaw gave up two singles but got out of that jam with the score remaining 1-0 in the favor of the Beantowners. Through three innings Ruth yielded three hits and no runs. Johnson had also allowed three hits over that stretch, but they were all doubles and cost him one run.

Neither team scored in the fourth or the fifth.

In the top of the sixth inning, Ruth struck out Johnson,5 then got Ray Morgan to ground out before allowing a single by Eddie Foster. Foster was left at first base when Clyde Milan lined out to right field.

“Boston refused to be awed by Johnson’s reputation and continued the bombardment, hitting him hard in every inning, but not hard enough to score [again] until the sixth when the damage was inflicted,” the Washington Herald wrote.6 That Red Sox rally began when Hoblitzell, Olaf Henriksen, and Chick Shorten all singled to load the bases.

Larry Gardner followed with a double, scoring Hoblitzell and Henriksen. Shorten stopped at third base. Then Boston’s fifth straight hit, a single by Jack Barry, scored Shorten and Gardner and gave the Red Sox a 5-0 lead. Johnson allowed no more hits in the inning, but that was all for The Train; manager Clark Griffith called on George Dumont to replace him for the seventh inning.

Anticipating Washington fans’ interest in what the mediocre outing may have meant for their meal-ticket pitcher, the Washington Times reported the next day: “Johnson left Washington at 8:30 today, where he will work out with Eddie Ainsmith in preparation for the opening game at home next Thursday. Johnson is not chagrined at his defeat, as he told Griff[ith] before starting the game that he was not ready because of so much inactivity at New York last week and at Providence over Sunday.”7 Commented the Washington Post: “The day should have suited Walter Johnson. It was very dark, threatening skies giving evidence of a downpour before game time, but the elements held off just long enough to help the Red Sox win. Johnson always has a hard time getting his fastball past the Red Sox batsmen.8 Today was no exception, and although the Nationals batted Ruth for eight hits, in only one inning were they able to bunch them, and that did not affect the total an iota.”9

Washington avoided being shut out in the top of the eighth inning with a single run fueled by Ruth’s walking the first two hitters and allowing a two-out single by Milan. Then the weather caused the umpires to call the game; for the first time in 1916, Ruth and Boston defeated Johnson and the Senators, this time, 5-1.10

Milliken spoke for the Washington faithful: “Somewhere back in 1914 the clan from the house of Griffith managed to come through the big end of the horn in this city. Since that time they have been forced to doff their hats to the new world’s champions. Last season the Nationals did not win a ball game on this soil.”11

Milan and Howie Shanks each had two hits for Washington, while the Red Sox’ Hoblitzell and Gardner had three hits, including a double for each. “The Red Sox had seven left-hand batters in the line-up,” the Washington Post noted.12 In Johnson’s time on the mound he gave up 11 base hits, 10 of them by the lefty batters. He did not walk a batter and struck out one. Ruth’s workmanlike performance: eight hits, two walks, and six strikeouts in eight weather-shortened innings.

This is the second in a series of Games Project accounts intended to present each of the mound matchups between Hall of Famers Babe Ruth and Walter Johnson as starting pitchers between 1915 and 1918. Johnson had been pitching for the Senators for eight seasons and was an established star before left-handed pitcher George Herman Ruth, later to be immortalized as Babe, debuted with the Boston Red Sox in 1914. Ruth and Johnson started against each other on eight occasions, starting in 1915 and extending through three of Ruth’s seasons in Boston, before the Red Sox dealt him to the New York Yankees on December 26, 1919. Although Johnson continued to pitch through 1927, the Yankees, recognizing Ruth’s prowess as a hitter, moved him to the outfield. He and Johnson never again met as starting pitcher opponents after October 3, 1917.

This series was conceived just as John Fredland was being installed as the new chair of the SABR Games Project committee. The author appreciates John’s enthusiastic support of the series and suggestions for elements to improve the original concept. Jack Zerby, who introduced the author to the SABR Games Project in 2017, assisted with first-review vetting. Thanks to both.

In addition to the sources cited in the Notes, the author consulted the Baseball-Reference.com and Retrosheet.org websites, including the box scores for this game: