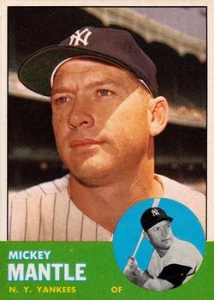 It was the “longest home run in the history of baseball,” gushed sportswriter Joe Trimble of the New York Daily News, about Mickey Mantle’s titanic blast over the left-field bleachers and out of Griffith Stadium.1 Not ready to dismiss the icon who began the sport’s love affair with the long ball two generations earlier, New York Times reporter Louis Effrat described it as “the longest ball ever hit by anyone except Babe Ruth in the history of major league baseball.”2 Herb Heft of the Washington Post called it “the grand daddy of all Griffith Stadium home runs.”3 The Senators’ 83-year-old owner, Clark Griffith, who had been around professional baseball since 1888, exclaimed, “No doubt about it, that was the longest home run ever hit in the history of baseball.”4

Mantle’s clout captured the nation’s attention, and also imagination – everyone wanted to know just how far it went. Minutes after the ball landed, the first attempt to measure its distance was made, and almost seven decades later scientists and historians are still debating just how far and high the ball could have traveled. As baseball historian Jane Leavy reminded us, Mantle’s prodigious blow evoked a new term: the tape-measure home run.5 Baseball was never the same.

The weather wreaked havoc on the Washington Senators as they tried to inaugurate the 1953 campaign. The season and home opener scheduled for Tuesday, April 14, was rained out, and rescheduled two days later as part of a day-night doubleheader with the New York Yankees.6 President Dwight D. Eisenhower tossed out the ceremonial first pitch in front of a crowd of 25,112, while a cold front forced the cancellation of the second game.7

What a difference a day makes. Gone was the pageantry – and few were the rays of sunshine – as the reigning four-time World Series champion Yankees (2-1) and Senators (0-1) took the field on Friday afternoon. A paltry crowd of 4,206, plus about 3,000 guests on Patrol Boy Day,8 braved the ominous skies, swirling wind, and threat of even more rain to find their seats in Griffith Stadium, making the cavernous ballpark seem even larger.

Toeing the rubber for the Nats was offseason acquisition Chuck Stobbs, a game-time decision, “at practically the last minute,” reported Heft.9 Skipper Bucky Harris felt that the Yankees would have more trouble with a southpaw than with the scheduled starter, righty Walt Masterson. The 23-year-old Stobbs, already in his seventh big-league season, set down the Yankees in order in the first. All eyes were on Mantle as he led off the second. The 21-year-old coil of muscle, however, was hobbling, suffering from a charley horse in his left thigh that required diathermy treatment before the game.10 Mantle walked, then surprisingly stole second. Joe Collins drew a two-out walk, but both were left stranded.

On the mound for the Yankees was graybeard Eddie Lopat, a favorite of manager Casey Stengel. The 35-year-old “Junkman” boasted a 131-92 career slate but was coming off an injury-riddled 1952 season, limited to just 19 starts. He breezed through the first two innings, yielding just a single.

The teams traded runs in the third. Billy Martin spanked a one-out “wind-blown homer into the left field bleachers” for the Yankees for the game’s first run.11 In the bottom of the frame, Eddie Yost’s two-out single plated Wayne Terwilliger to tie the score. The Yankees took the lead in the fourth on Collins’s one-out single driving in Hank Bauer, who had led off with a bloop double.

The switch-hitting Mantle came to the plate in the fifth after Yogi Berra drew a two-out walk. In just his third season, Mantle’s name was already synonymous with long home runs. Just eight days earlier, in an exhibition game against the Pittsburgh Pirates on April 9, the Commerce Comet duplicated The Babe’s last home run by becoming just the third player to clear the right-field roof at Forbes Field.12 Batting right-handed against the southpaw Stobbs and using a borrowed bat from teammate Loren Babe,13 Mantle connected squarely with a self-described “chest-high fastball” on a 1-and-0 count.14 “[H]elped by a brisk tail wind,” reported Heft, Mantle’s blast sailed over the left-center-field wall, 391 feet from home plate and then over the 55-foot-high left-field bleachers, the first time that had happened since they were built in 1924. The ball clipped the National Bohemia beer advertising sign that sat 15 feet higher, before leaving the ballpark and giving the Yankees a 4-1 lead.

Yankees press secretary Red Patterson immediately recognized that he had a front-page story in the making. He left the press box and looked for the ball. He eventually found a 10-year-old boy, Donald Dunaway, who explained that he had found the ball in the yard at 434 Oakdale Place. By walking 105 feet from the edge of the ballpark, a spot that was 460 feet from home plate, Patterson measured the distance the ball traveled to be 565 feet.

No other home run has been the object of so much deliberation, which is a testimony as much to Mantle’s beloved stature as it is to baseball’s romantic relationship with the home run. A few days after the blast, a federal judge even declared that Mantle’s blast was not wind-aided and was the sole product of his power.15 Patterson’s calculation of the distance was far from scientific and many experts raised questions about it. Among the first was Bill Jenkinson, an authority on the history of long home runs. He estimated that Mantle’s blast traveled 510 feet.16  Alan Nathan, a physicist, baseball historian, and acknowledged expert on Mantle’s home run, pointed out that the events after the ball left the park were “unknown and quite likely unknowable.”17 Analyzing launch angles, trajectories, and wind, Nathan argued that the ball traveled at least 538 feet.

The game continued after Mantle’s home run, even if sportswriter Louis Effrat quipped that “everything else that occurred in this contest was dwarfed by Mantle’s round-tripper.”18 In the bottom of the fifth, Lopat looked “ready to fall apart,” wrote Heft. The Senators loaded the bases on two singles and a walk, but Mickey Vernon, who’d go on to win the batting title in ’53, grounded out. The Nationals picked up a run in the seventh when Terwilliger led off with a double. Mel Hoderlein, pinch-hitting for Stobbs, lined a one-out single to left to trim the Yankees lead to two runs, 4-2.

The Yankees blew the game open in the eighth inning. Switching sides of the plate against right-handed reliever Julio Moreno, Mantle drew a leadoff walk, but was forced at second on Bauer’s grounder. Gene Woodling’s double plated Bauer. With two outs Andy Carey, Lopat, and Martin hit consecutive singles, resulting in two more runs (RBIs to Carey and Martin) and extended the lead to 7-2.

Lopat worked around a leadoff walk to Vernon in the eighth by inducing Jackie Jenson to ground back to the mound and helped his own cause by initiating a 1-4-3 twin killing. But Lopat was laboring. After Pete Runnels walked and Ken Wood singled, Terwillger collected his third hit of the afternoon, singling in Runnels.

With the game seemingly decided, Moreno was back on the mound for the Senators in the ninth. With one out, he faced Mantle again. Despite his sore left leg, Mantle attempted a drag bunt. The ball bounced in front of second base and Mantle, considered among the fastest players out of the box to first base batting left-handed, easily reached first on what Effrat quipped was the “longest bunt on record.”19 Bauer followed with a walk, but both were left stranded.

Lopat tossed a few warm-up pitches to begin the ninth, then walked off, too tired to continue, reported the New York Daily News.20 He was replaced by reliever Tom Gorman, who set the Senators down in order to end the game in 2 hours and 27 minutes.

The game featured 22 hits, 12 of those by the Yankees, but none was bigger than Mantle’s home run. In the decades since that fateful spring day in Washington, the stature of that clout has grown into mythic proportions, much like Mantle himself.