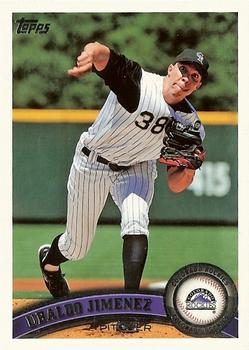 This article was written by Michael T. Roberts

Through the 2018 season, only one pitcher wearing a Colorado Rockies uniform has thrown a no-hit game. It happened in Atlanta on Saturday evening, April 17, 2010, the Rockies’ 18th season of National League play. The Braves came into the contest having won their last three games, including a 9-5 win over the Rockies the night before. They would go on to win 91 games that year and earn the National League wild-card playoff spot.

The Rockies were the defending NL wild-card team, coming off an incredible season the year before to claim the postseason spot. More success was anticipated again in 2010. Likewise, 26-year-old right-hander Ubaldo Jimenez was expected to do big things. This was Jimenez’s third full season in the majors. He had earned the Opening Day start, going six innings in Milwaukee while striking out six and walking one to get the win in a 5-3 decision over the Brewers. He won again at home in his second start, against San Diego, again going six innings, with seven strikeouts and three walks while throwing 115 pitches.

This night would be the 6-foot-5 Jimenez’s third start of the young season. Before the game, catcher Miguel Olivo approached pitching coach Bob Apodaca to say, “What will you do if I catch a no-hitter?”1 Apodaca responded that he would give Olivo $1,000, to which he replied, “Get ready to pay.”2

As the game got underway, the Rockies gave the big righty an early lead with a run in the top of the first when Troy Tulowitzki’s sacrifice fly plated Carlos Gonzalez, who had doubled and advanced to third on a groundout. Jimenez gave up a one-out walk in the bottom of the first, but got Chipper Jones on a double-play grounder to end the inning. Pitching for the Braves was right-hander Kenshin Kawakami, in his second year of major-league baseball.

Jimenez, a native of the Dominican Republic, walked another batter in the second inning and two in the third, struggling with his command early. But his stuff was so good he was able to pitch around the wildness without incurring any further damage. Jimenez and Olivo both showed some good defense in the bottom of the third. After Jimenez walked leadoff batter Melky Cabrera, Kawakami tried to bunt Cabrera to second base but Jimenez fielded the ball and threw Cabrera out at second. After a strikeout and another walk that pushed Kawakami into scoring position at second base, Olivo fired the ball to shortstop Tulowitzki, picking Kawakami off the base.

In the top of the fourth, the Rockies scored three more times. Brad Hawpe led off with a single to left. After Olivo struck out, third baseman Ian Stewart also singled to left, with Hawpe taking second. Clint Barmes popped to second, then Jimenez helped his own cause by hitting a single to center field, Hawpe scoring, then taking second base on the throw home. Gonzalez doubled, scoring both Stewart and Jimenez, before Dexter Fowler grounded out to end the inning. It was Rockies 4, Braves 0.

The fourth and fifth innings both started with Jimenez walking the leadoff man. Still he pitched through the location problems. After 83 pitches the imposing right-hander had thrown more balls than strikes, 42-41.

When Jimenez went to the mound to pitch the bottom of the sixth, pitching coach Apodaca, trying to help him gain better control of his exploding fastball and secondary pitches, suggested that he pitch from the stretch. It looked to be the answer as Jimenez retired the Braves in order on 10 pitches. He was even better in the seventh, using only 12 pitches to retire the side. But it did not come without some drama.

Troy Glaus led off the Braves seventh with a towering drive to left-center field. At first it looked as if the ball might land in the bleachers, but a brisk wind was blowing in and held the ball up. Center fielder Dexter Fowler made an all-out sprint toward the gap. Racing 40 yards, he dove for the ball and gloved it just before tumbling to the ground.(“Play of the year, given the circumstances,” Rockies first baseman Jason Giambi said after the game.3 )

The next batter, Yunel Escobar, hit a looping liner to shallow center. Again it was Fowler stepping up on defense, charging in and making a basket catch at his knees to record the out. After the game, Jimenez enthused, “That was unbelievable. The way he dove, I was, like, unbelievable.”4 He then struck out rookie Jason Heyward for the final out of the inning. Jimenez was well aware he had a no-hitter going. “After the seventh inning I was like ‘Whoa, there’s only two innings left. I have a chance to do this.’”5

Rockies fans and players breathed easier in the eighth inning, as the Braves went down 1-2-3 in routine fashion on two groundouts and a popup behind home plate.

By the ninth inning the Rockies still held their 4-0 lead. The game’s outcome was in little doubt  — all of the drama was focused on Ubaldo Jimenez and whether or not history would be made. The closest a Rockies pitcher had come to a no-hitter up to this time was in 2002 when Jason Jennings threw 6⅔ hitless innings against the Pittsburgh Pirates.6

The bottom of the ninth started harmlessly enough, with Martin Prado hitting a 2-and-1 pitch for a short fly to second baseman Barmes. Due up next was future Hall of Famer Chipper Jones, followed by All-Star catcher Brian McCann. In talking about this moment after the game, Jimenez commented, “I was like, ‘Why does it have to be them? Can’t you guys give me a break?’ But Jones flied out to left field, then McCann could not square up an inside pitch and grounded to second for the last out, setting off a Rockies celebration.

Ubaldo Jimenez was at the top of his game that night, in what has been his best major-league season to date. Three times he hit 100 miles an hour on the gun, and his last pitch of the game was 97. He threw 128 pitches, striking out seven. He walked one batter in each of the first five innings, two in the third, to end the game with six. In McCann’s postgame comments he said, “After my first at-bat, I knew it was going to be one of those nights. His stuff was so good. We couldn’t find the barrel on anything.”

Reserve infielder Melvin Mora was the first player off the bench to greet Jimenez after the final out. “Before the last inning, I told him to go forward into the spotlight, to grab it,” Mora said. “It was his night and now he’s going to remember it forever.”