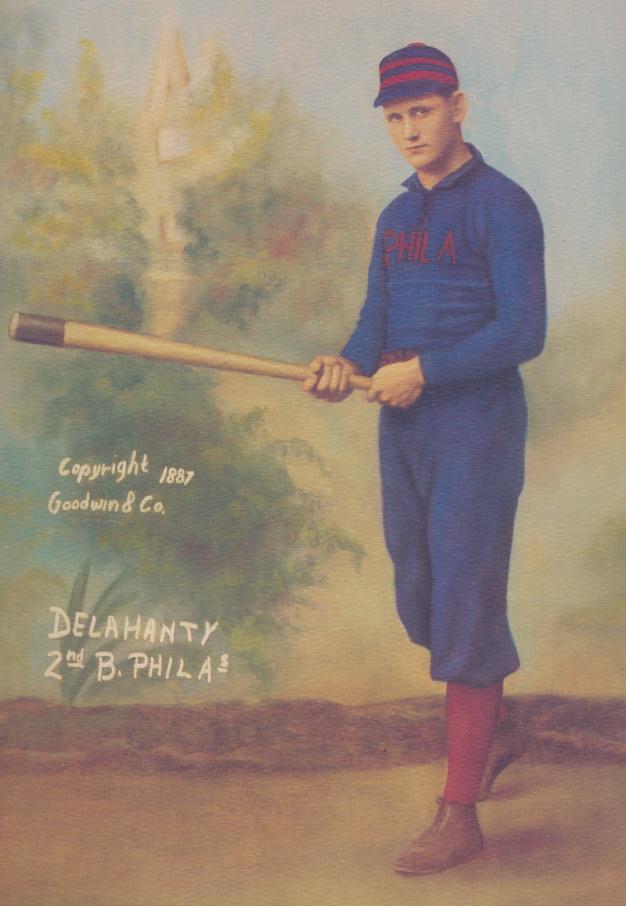 The Philadelphia Phillies and Baltimore Orioles were a study in contrasts in 1894. The Phillies possessed a “quiet deportment and even temper,”1 whereas the Orioles were rowdy and aggressive. The Phillies were an offensive juggernaut, a “team of heavy hitters,”2 while the scrappy Orioles relied on cunning and guile. The Orioles won the 1894 pennant, finishing 18 games ahead of the fourth-place Phillies in the 12-team National League.

Before the start of the 1895 season, the Chicago Tribune declared that the Phillies “lack championship quality; they are not aggressive players, and aggressiveness in baseball is a necessity.”3 Historian Jerrold Casway explained: “The rough and tumultuous style of play” of the Orioles “brought success at the expense of order. Winning games by any means available became the mark of champion teams.”4 Phillies outfielder Billy Hamilton said his team would be tougher in 1895: “The trouble in the past has been that the other teams did as they pleased with us. They played football while we played baseball, and won many games from us by unfair means. … We have simply made up our minds to take care of ourselves this year and not permit any more funny business.”5 The Phillies’ new credo would be tested on Opening Day in Baltimore.

A new grandstand had been built at Baltimore’s Union Park, replacing the one that had burned to the ground in January 1895,6 and was ready for the season opener on Thursday, April 18, 1895. When the ballpark opened its gates at 1:30 P.M., more than two hours ahead of the scheduled first pitch, there was “a grand rush for the best seats.”7 Attendance was reported to be nearly 15,000, including “700 faithful followers of the Phillies” who arrived on a special train from Philadelphia.8 The crowd “overflowed into the field, completely surrounding the playing portion of it in rows ten deep.”9 Some fans stood behind a rope in front of the outfield fence, and any hit between the rope and fence was a ground-rule double.

Vendors sold peanuts, ginger ale, lemonade, cigarettes, and cigars. The stands were filled with “the harsh smell of strong tobacco.”10 Beer was sold in the bleachers but not in the grandstand. The ladies’ brightly colored dresses stood out in stark contrast to the men’s drab attire.11 During the pre-game ceremony, the Orioles’ 1894 championship pennant was raised triumphantly on the center-field flagpole.12 Meanwhile, back in Philadelphia, enthusiastic fans assembled at the Academy of Music to follow the game; each play would be telegraphed to them using the new “Compton Electric System.”13

Phillies manager Arthur Irwin chose Jack Taylor, a 21-year-old right-hander, as his starting pitcher; Taylor was the ace of the Philadelphia staff, with a 23-13 record in 1894. Orioles manager Ned Hanlon sent 27-year-old southpaw Charles “Duke” Esper to the mound.

After a quiet first inning, Ed Delahanty of the Phillies singled in the top of the second, on a sharp grounder to Orioles third baseman John McGraw. With Billy Hallman at bat, Delahanty was thrown out attempting to steal second base; Hallman tried to obstruct the throw from catcher Wilbert Robinson with his bat, but Robinson got the ball down to shortstop Hughie Jennings, who applied the tag.14 Robinson was surprised that Hallman had tried a trick out of the Oriole playbook and complained to the umpire about it, but received no sympathy.15

The Orioles scored the first run of the game in the bottom of the third inning, on two singles and an error. They erupted for five more runs in the bottom of the fourth, with doubles from Heinie Reitz, Jennings, Robinson, and Willie Keeler. Neither team scored in the next three innings, and after seven innings, Baltimore led 6-0. The champions were playing like champions.

Taylor closed out the game in the bottom of the ninth by striking out Kid Gleason and McGraw, and getting Keeler to fly out to Delahanty in center field. The final score was Philadelphia 7, Baltimore 6. Oriole fans were in shock. Their departure “from the scene of the disaster was slow, measured and funereal.”19 Sporting Life praised Philadelphia’s performance and noted “one rather surprising development” – “an unusual disposition on part of the Phillies to play aggressive ball.”20