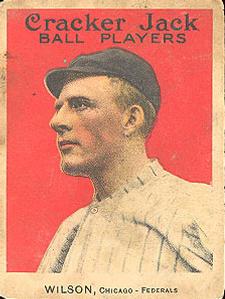 It was the Deadball Era, where home runs were few and far between until the coming of George Herman “Babe” Ruth.

Arthur Earl Wilson hit just seven home runs in 12 major-league seasons, mostly with the New York Giants and Chicago Cubs. When Wilson joined the Federal League’s Chicago Chi-Feds in 1914, he became a slugger. Wilson belted 10 round-trippers that season, the largest single-season total in his career. On April 19 Wilson homered twice, his second blast tying the score in the ninth inning. The homer had special significance because the game lasted 15 innings, the fourth longest in the league’s two-year history.

Yet Wilson was not the hitting hero in victory but in defeat. The Kansas City Packers held off a Chicago team heavily favored to win the inaugural Federal League title and won, 7-6, on William Jennings “Duke” Kenworthy’s single that scored Chet Chadbourne with the winning run, to the delight of an estimated crowd of 4,000 to 5,000.1

It was a raw, chilly day at Gordon and Koppel Field in Kansas City, Missouri, when the two teams met for the final game of a four-game series. Max Fiske started for Chicago but had control problems. When he eased up to get his pitches over the plate, the Kansas City hitters took advantage. In the bottom of the fifth, Packers shortstop Pep Goodwin doubled. With one out, pitcher Ben Harris blasted a triple to deep center field, scoring Goodwin, and Chabourne doubled to score Harris. Chi-Feds shortstop-manager Joe Tinker yanked Fiske for Erv Lange, who allowed two singles that added two more runs. Kansas City led, 5-2.3 Lange yielded another run in the sixth when Goodwin singled to center and catcher Ted Easterly — who caught the entire 15 innings for the Packers — doubled.4

Chicago went with Charles John “Doc” Watson to start the seventh inning. Little did Watson know that he would deliver a near-complete-game performance — 8⅔ innings, seven strikeouts, one walk, three hits, and one run allowed. Yet Harris, a Kansas City, Kansas, native, seemed on his way to a victory. He allowed the first two runs of the game on Wilson’s first homer in the third and Dutch Zwilling’s blooper over third base that scored Tinker in the fourth. In the top of the eighth, the Chi-Feds’ collection of future and former Chicago Cubs on their roster went to work. Rookie left fielder Max Flack singled past Kenworthy and third baseman Rollie Zeider singled to left. Tinker singled to center to load the bases and first baseman Fred Beck’s RBI grounder made it 6-3. Zwilling followed with a sacrifice fly to left field and right fielder Al Wickland singled to score Tinker.5 Ex-Cincinnati Reds curveball artist Gene Packard replaced Harris and retired switch-hitting second baseman Jack Farrell for the third out to preserve Kansas City’s 6-5 lead. The eighth-inning rally sparked raucous enthusiasm from the Chicago bench that was too much for umpire Steve Kane. Third-base coach Jim Stanley got the thumb for being “too enthusiastic.” When Tinker’s hit loaded the bases, bench jockeying reached a crescendo with players pounding their bench with bats. Kane tossed pitchers Ad Brennan and Dave Black and infielder Bill Jackson. In the ninth Kane ejected Zeider for arguing balls and strikes. “(He) became furious and said a lot of things in a grumbling voice,” Weller wrote. The grumbling cost Zeider $25.6

Packard faced Wilson to start the ninth. Wilson (who had 10 total bases with two homers and two singles in six at-bats and recorded 10 putouts in 15 innings) connected on one of Packard’s slants and drove the delivery over the left-field wall to send the game into extra innings. “By this time,” Weller reported, “each side had put in a fresh pitcher and the real battle began.”7 Before Wilson’s homer, Tinker had Claude Hendrix warming up and considered pinch-hitting for Watson but chose to stay with him. Packard and Watson each pitched five scoreless innings, recording six strikeouts apiece, before the fateful 15th inning, Watson having allowed one hit. “His speed was great and his control perfect,” Weller wrote.8

In the bottom of the 15th, Chadbourne lined a single over Tinker’s head, right fielder John Potts bunted Chadbourne to second, and Kenworthy ended an 0-for-6 day and the game with a two-out single to center. Packard, who allowed Wilson’s a second homer, was the winner. Watson, who worked 8⅔ innings and allowed only three hits, took the loss. Wilson, who hit two homers, could only watch the winning run score. To add further injustice, Chicago collected 15 hits to seven for Kansas City.

“Those who predicted a runaway race for the Chicago team must make another guess,” Weller wrote. “By their stirring conquest today, the Packers evened up the series at two-all, and displayed a ball team that will give them all a fight.”9 Not exactly. Kansas City finished sixth (67-84), 20 games behind the leader. But the Chi-Feds were not the champions; the Indianapolis Hoosiers beat them out. Perhaps the surprise outcome had its roots in this 15-inning marathon filled with game-tying homers, unlikely heroes, bench jockeying, ejections, and cheering fans that make baseball in any league a great game.