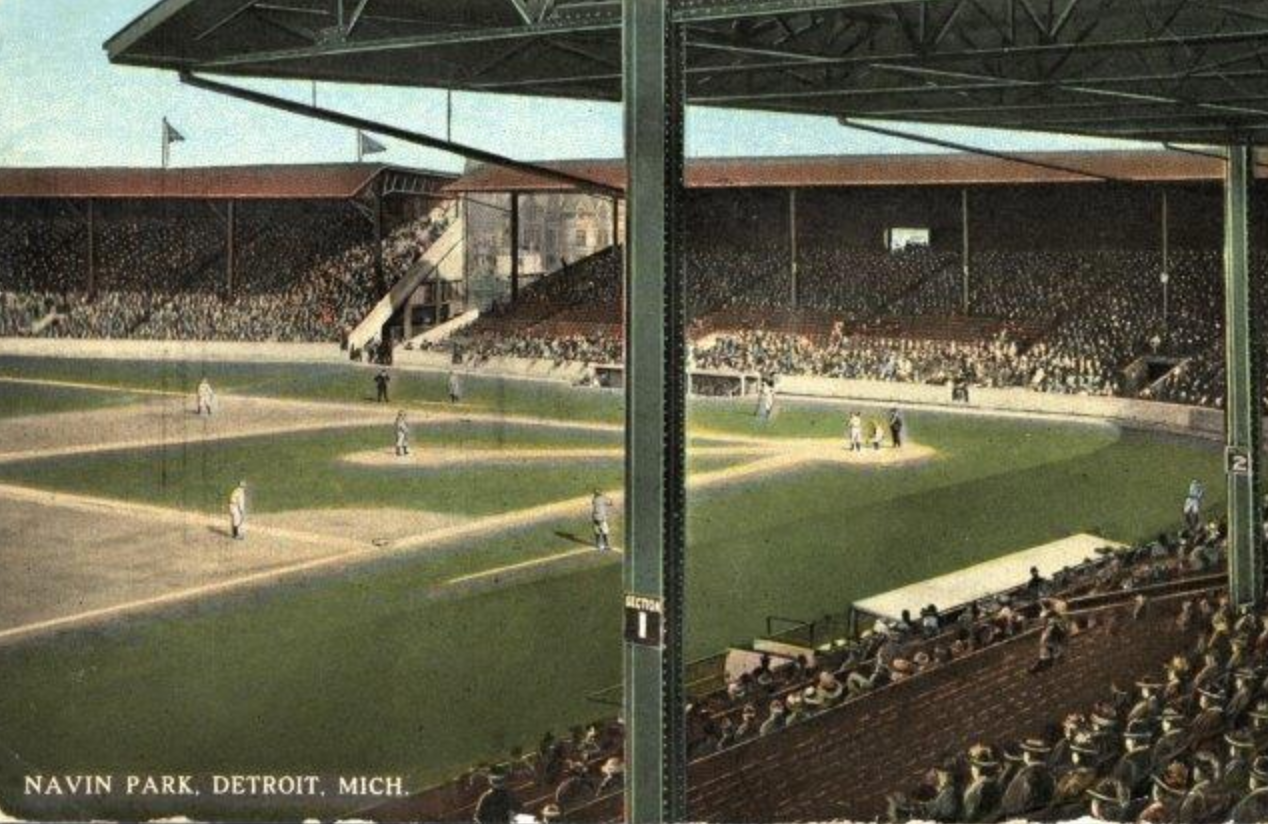 The first game to be played at Navin Field was scheduled for Thursday, April 18, 1912, with the Detroit Tigers hosting the Cleveland Naps. To commemorate this special Opening Day of the season, many activities were scheduled, all to take place on the 18th. A parade featuring both teams was to work its way from the middle of downtown Detroit to the new ballpark at the corner of Michigan and Trumbull Avenues. After the game the Tigers and Naps were to attend a banquet in their honor at the elegant Hotel Pontchartrain, sponsored by the Detroit Board of Commerce. However, once again, the best plans did not occur as planned. It rained hard on April 18 and the game was postponed.

The baseball park the Tigers had played in in 1911 was called Bennett Field. Immediately after the last game of the 1911 season, the small wooden structure was demolished, and Navin Field was erected on the same plot of ground. Made of steel and concrete, a new construction concept at the time, it was reported to have cost around $300,000 to build.

The rain started during the evening of Wednesday, April 17, and lasted most of Thursday, causing the rainout. On Friday the game was also postponed; officially the reason was unplayable grounds. This was plausible, considering that the field was so new and had taken on a lot of water. This was largely the result of the park’s new tarpaulin: It was hailed as a perforation-type (rather than a solid sheet), which was supposed to make it less vulnerable to wind. Unfortunately, excessive amounts of rainwater drained through the perforated tarp’s holes, causing a muddy field. But another possible reason for the postponement (which was never listed as official) was that Frank Navin was a superstitious gambler who did not want to start the season on Friday, which he referred to as the hoodoo day of the week.

There was some talk that the game would be shifted to Cleveland, which had a dry field. In fact Ban Johnson, president of the American League, had bought off on this idea. The opening game was originally scheduled as the start of a four-game series with the Naps. It turned into a two-game series. If these games had been shifted to Cleveland, the first game at Navin Field would have been pushed back until April 27, another reason for trying to play the games in Detroit.

Despite the delays, the banquet went off as originally scheduled on Thursday evening. The parade and game took place on Saturday. The first pitch was thrown out by Mayor William Barlum Thompson of Detroit, who threw it to Charley Bennett, a popular ex-Tiger catcher from the 19th century, and the namesake of old Bennett Park.

The starting lineups were, for Cleveland:

As can be seen, the starting lineups included three future members of Baseball’s Hall of Fame: charter member Ty Cobb, Wahoo Sam Crawford, and Nap Lajoie. Many might argue that a fourth player, Shoeless Joe Jackson, should be in the Hall of Fame, too.

The first pitch by Mullin was a called strike to Jack Graney, the game was finally started, and the history of Navin Field had begun.

Cleveland wasted little time scoring the first run at the new park, although the Naps did get help from the Tigers. The game’s third batter, Shoeless Joe Jackson, reached first on a base on balls, immediately stole second, and raced home on an error by Tigers second baseman Jim Delahanty on Nap Lajoie’s grounder. The run was unearned.

Left-hander Vean Gregg, 23-7 with a league-leading 1.80 ERA the year before, was Cleveland manager Harry Davis’s starter. In the first inning, Ossie Vitt singled and was sacrificed to second by Baldy Louden. On the very first pitch he saw at Navin Field, Cobb rapped a base hit, scoring Vitt. The Georgia Peach went to second on Crawford’s single. Then it got exciting. Cobb and Crawford performed a double steal as Delahanty struck out. While on second and third, Cobb and Crawford performed yet another successful double steal. The aggressive baserunning produced Cobb’s first run at Navin Field — on his steal of home.

The game went back and forth for the next seven innings. Cleveland scored two in the third on an infield single and a bases-loaded hit batsman to take a 3-2 lead, but Detroit came back in its half to tie it up, and might have scored more but the bold and daring Cobb was thrown out at home plate trying to score from second base on Delahanty’s grounder back to the pitcher.

In the fifth Cleveland went ahead by two runs on a single, a double, and a bad error by second baseman Delahanty. The score stayed 5-3 until the bottom of the eighth, when Detroit tied the game on Cobb’s single, Crawford’s double, and Delahanty’s two-run single past third baseman Terry Turner.

The game went into extra innings. In the top of the 11th, Cleveland put runners at second and third with just one out, thanks to an error and Joe Jackson’s ground-rule double into the overflow crowd in center field. Because of the huge throng in attendance (according to the turnstile count it was 24,382, but estimates put it at closer to 26,000), many hundreds of fans had to stand in the nether reaches of the outfield in a cordoned-off area. This had resulted in five ground-rule doubles, four by Cleveland and one by Detroit. The Cleveland Plain Dealer said that Jackson’s drive would likely have gone for a triple had it not been for the ground rule that held him at second — and more importantly, held Olson at third.

Mullin issued an intentional walk to Lajoie, which loaded the bases. The strategy paid off: The next two batters grounded out without a run being able to score.

In the Detroit half of the 11th, Del Gainer grounded out, but Donie Bush singled and Oscar Stanage followed suit. Bush went to third as Stanage was out at second trying to take an extra base. That made it two outs with Bush on third. Even though Mullin had already given up 13 hits and walked four, Jennings elected to let him hit for himself — he was a good hitter, having batted .286 in 1911. Mullin came through. He singled to left, scoring Bush with the winning run.

It was quite a way to inaugurate a new ballpark.

In addition to the sources cited in the Notes, Retrosheet.org was also accessed.