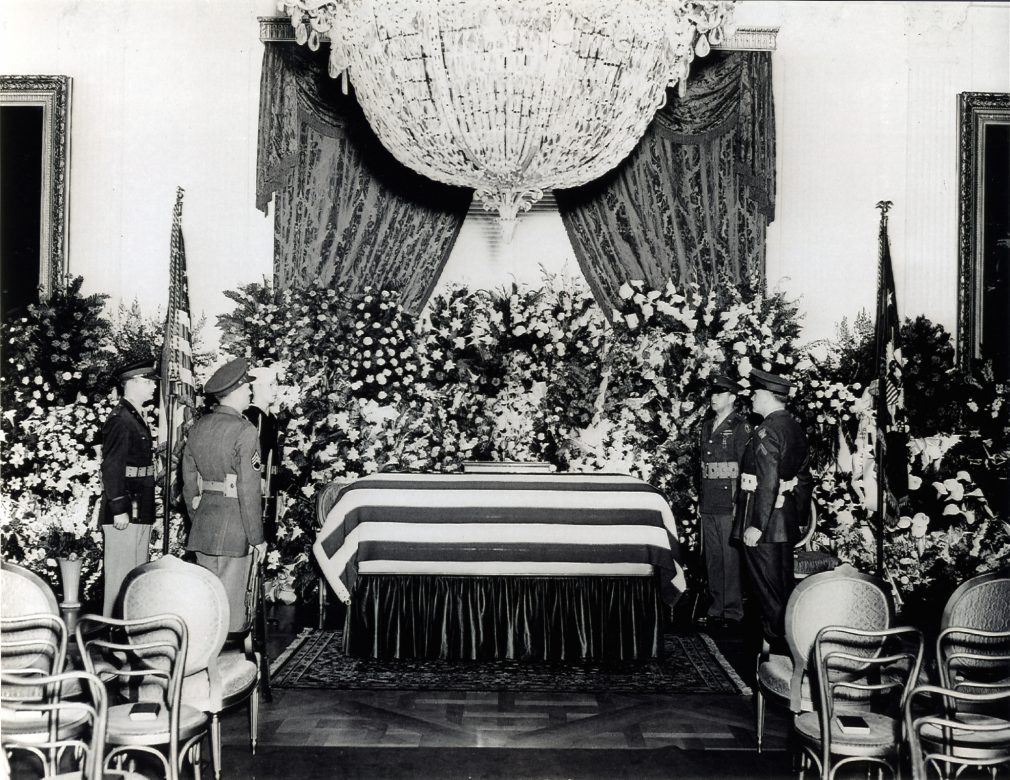 An “all services” honor guard with President Franklin D. Roosevelt’s casket in the East Room of the White House, April 14, 1945. (FDR LIBRARY)

On December 8, 1941, President Franklin D. Roosevelt delivered his famous speech that famously called December 7 “a date which will live in infamy.” On April 12, 1945, Roosevelt died at the age of 63 from a stroke, and the nation was mourning the loss of its beloved leader when the Washington Senators played their home opener on April 20.

The Senators had played their first three games of the 1945 season on the road against the Philadelphia Athletics. In their home opener, against the New York Yankees, they paid tribute to the late president.

Al Costello of the Washington Post observed, “It was almost eerie when Goldman’s Band finished the National Anthem. The gay and carefree crowd of other years when men were peaceful was conspicuous by its absence — almost to an extreme — as both clubs dedicated the game to the memory of its good friend and rescuer.”1

In January of 1942 Commissioner Kenesaw Mountain Landis had written to Roosevelt asking if major-league baseball should be suspended for the duration of the war. FDR responded, in what became known as the Green Light Letter, “I honestly feel that it would be best for the country to keep baseball going.”2

A New York sportswriter described the day: “After the traditional activities, the first ball was thrown out by House Speaker Sam Rayburn, there was the traditional march to the flagpole, and then a brief ceremony to honor the memory of President Roosevelt. All of this was in accordance with the wishes of the 24,494 patrons, but this can hardly be said for the game itself. For the Senators looked as bad as they did last year when they finished last and the Yanks rolled like big tanks to their fourth straight victory, 6-3.”3

The result of the game was perhaps predestined, lamented the Washington Post’s Walter Haight. “Those Yankees — any guys in that uniform — who have spoiled many an opening day for Washington fans, did it again yesterday, continuing their unbeaten ways.”4

The Yankees had finished third in 1944, six games behind the first-place Browns, while the Senators were eighth and last, trailing the pennant-winning St. Louis Brown by 25 games. The Yankees’ starter was Bill Bevens, in his second major-league season and making just his sixth major-league start. Starting for the Senators was third-year pro Mickey Haefner, a knuckleballing southpaw who had finished the 1944 season 12-15 with a 3.04 ERA.

Haefner set the Yankees down in order in the in the first inning while Bevens gave up a leadoff walk to George Case. Bevens had Case picked off first base, but made a wild throw and Case went to second. On George Myatt’s groundout, Case advanced to third base but was left stranded when Joe Kuhel struck out and George Binks flied out to Russ Derry in right field. In the Yankees’ second, Nick Etten doubled with one out but Haefner got Joe Buzas to pop out to third and Don Savage to ground out. The Senators could not score in the bottom of the second despite two errors (one by Bevens and one by Savage at third) that put Washington runners on first and second. with two outs. Haefner grounded out to end the threat and there was nary a run on the scoreboard.

The only hit in the third inning by either team was a two-out single by the Yankees’ Snuffy Stirnweiss. New York broke the ice in the fourth. Tuck Stainback led off with a single and took second on a groundout by Johnny Lindell. Etten singled to center field and Stainback scored while Etten went to second base on Walt Chipple’s error in center field. A single by Buzas scored Etten and after Don Savage’s double advanced Buzas to third base, Herb Crompton hit a fly ball to center field that scored Buzas and gave the Yankees a 3-0 lead.

Bevens walked Harlond Clift with one out in the Senators’ fourth, but got Gil Torres to ground into a double play that ended the inning. Haefner pitched to just two batters in the top of the fifth inning, giving up a triple to Stirnweiss and walking Russ Derry. Senators manager Ossie Bluege replaced Haefner with second-year pro Wally Holborow, who got Stainback on a fly ball but walked Lindell to load the bases with one out. Etten’s groundout scored Stirnweiss. Then, with Buzas at the plate, a passed ball allowed Derry to score the second run of the inning. Holborow then got Buzas on a fly ball to end the half-inning with the score New York 5, Washington 0.

The Senators got to Bevens in the bottom of the inning. The rally started with Bevens walking the first two batters, Chipple and Al Evans. A sacrifice by Holborow moved them to second and third. George Case’s fly ball scored Chipple and Myatt’s single scored Evans to make the score 5-2, New York.

Washington made it a 5-3 game in the bottom of the sixth on a double by George Binks and a single by Clift. That was enough for Bevens, who had walked three and given up four hits. Yankees manager Joe McCarthy brought in Al Gettel, who was making his major-league debut. Gettel got his first major-league strikeout, Gil Torres, Chipple flied out to right, and Gettel got out of the inning by striking out Al Evans.

It was a scoreless seventh inning. In the top of the inning, Holborow gave up a single to Stainback, who was caught trying to steal second. Gettel got two Washington batters quickly, then Myatt reached on an error by Buzas. After a single by Joe Kuhel put runners on first and third, Gettel got Binks to fly out.

Lindell led off the New York eighth with a triple to center field off Sandy Ullrich, who had relieved Holborow. Lindell scored on Etten’s single to make the score 6-3 in favor of New York. Gettel got Washington in order in the bottom of the eighth while in the top of the ninth Ullrich allowed just a two-out single to Derry. In the bottom of the ninth, Al Evans flied out to right field and Hillis Layne, pinch-hitting for Ullrich, grounded out to second base. Case worked a walk but the game ended with George Myatt taking a called third strike, giving New York a 6-3 win.

The Daily News’s Joe Trimble wrote, “The Yanks splattered Haefner and two other chuckers for 11 hits, three by Nick Etten who is pounding the ball with customary Springtime vigor. Nick’s pair of singles and a double sent his average to an even .500 for the four games and his three runs batted in make a total of seven.”5

New York made four errors. The Senators made one, by Chipple, which figured in the Yankees’ three-run fourth.