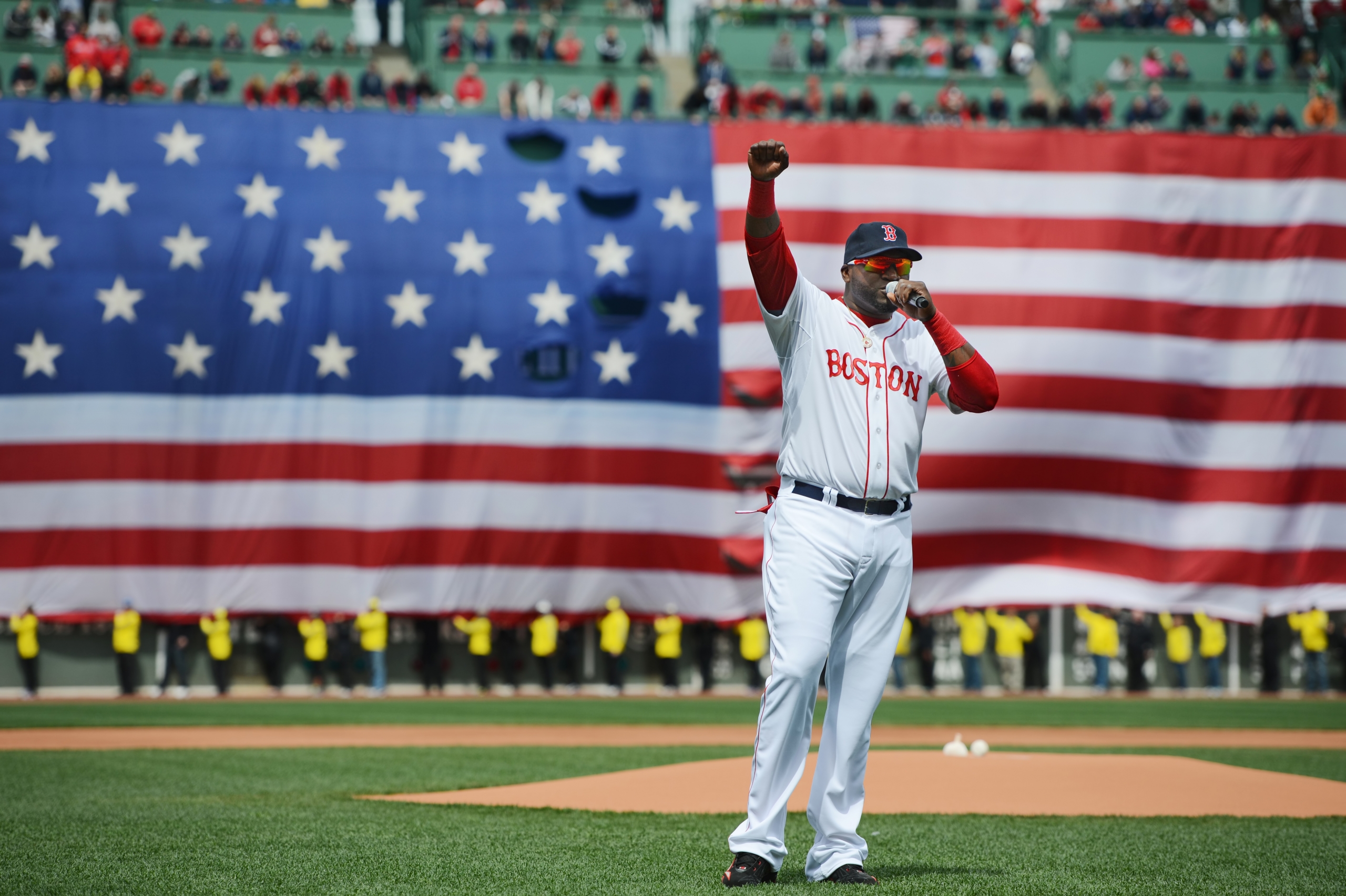 Monday, April 15, 2013, was Patriots Day in Massachusetts, a state holiday commemorating the Battles of Lexington and Concord. Patriots Day is famous for two sporting events — the Boston Marathon, and the morning Boston Red Sox game. The end point of the Marathon is just a few blocks from Fenway Park, and in past years, Red Sox players would often go watch the runners crossing the finish line after their game, which starts at 11 A.M. However, in 2013 the Red Sox had a three-game road trip to Cleveland starting the day after Patriots Day, so the players left for the airport and their charter flight after the game. Shortly before 3 P.M., a time when some of the players may have been near the finish line if not for the road trip, two explosions 12 seconds apart rocked the area, killing three people and injuring scores of others.1 Two brothers were fingered as the perpetrators of what was called a terrorist act.

The Red Sox returned to Boston from Cleveland in the early-morning hours of Friday, April 19 after sweeping all three games with the Tribe.  At the same time, a manhunt was underway for one of the brothers. (Earlier on Thursday night, the two suspects had been involved in a shootout with police, leaving one of them dead and the other on the run.)

With the main focus being the apprehension of the remaining suspect, on Friday Massachusetts Governor Deval Patrick asked residents of the Boston area to shelter in place and allow law enforcement to search for the suspect. This meant that that night’s Red Sox game against the Kansas City Royals had to be canceled. As darkness fell, the city and all of the region breathed a sigh of relief when the suspect was apprehended early Friday evening, hiding in a boat in a backyard in Watertown, a suburb of Boston.2

It was against this backdrop that 35,152 fans filled Fenway Park on Saturday, April 20, for the first home game since the bombings. In pregame ceremonies, a large American flag was unfurled from the top of the Green Monster in left field, spanning the width of the wall. Law-enforcement officers who had participated in the search for the bombers, including some who had been present at the capture of the suspect the night before, streamed onto the field from a doorway in center field, ringing the infield. A video montage was played on the center-field scoreboard of images from the bombing and subsequent manhunt, set to Leonard Cohen’s Hallelujah.3 First pitches were thrown by Steven Byrne, who was injured in the bombing, and Matt Patterson, an off-duty firefighter who had aided an injured boy. Usually, there is an invited singer to sing the National Anthem before each game. But on this day, the Red Sox left it up to the fans to provide the vocals, as the Boston Bruins had done at their game on Wednesday night. The Fenway organist, Josh Kantor, provided the music. “The louder they sang, the softer I played,” said Kantor.4 Understandably, emotions were running high. Across the ballpark, fans were waving “Boston Strong” signs that had been given out outside the park. And then, in an unscripted move, David Ortiz, activated for the first time that season after suffering a heel injury, and long a leader on the team, grabbed the microphone to address the crowd, “This is our [expletive] city, and nobody is going to dictate our freedom. Stay strong,” he declared. The crowd roared in approval.

The game was scoreless through the first four innings. In the fifth Lorenzo Cain led off with a double, took third base on a fly ball to center field by Mike Moustakas, and scored on a fly to left field by Jeff Francoeur, giving the Royals a 1-0 lead. It stayed that way into the bottom of the sixth inning, when Jacoby Ellsbury led off with a single, was sacrificed to second by Shane Victorino, advanced to third base on a groundout by Dustin Pedroia, and scored on a single by Ortiz.

In the seventh inning the Royals took the lead again as Cain doubled for the second straight at-bat and scored on a triple to right field by Salvador Perez with 2 outs. In the bottom of the inning, Shields was replaced by Aaron Crow, who hit the first batter, Daniel Nava, then allowed a single to Will Middlebrooks. With Stephen Drew at the plate, Royals catcher Salvador Perez picked Nava off second base. After an error by Moustakas that allowed Drew to reach base, Crow was replaced by Tim Collins, who got the final two outs without allowing any runs.

Despite allowing a hit and a walk, Buchholz escaped the eighth inning without allowing any runs as he got Eric Hosmer to ground into a double play, so the score remained Royals 2, Red Sox 1 going into the bottom of the eighth inning.

A tradition at Red Sox games between the top and bottom of the eighth inning is the playing of Neil Diamond’s Sweet Caroline, with the crowd joining in, especially on the chorus. At this game, the fans were in for a surprise, as Neil Diamond performed his song live. Like many in the country, he had been following the events of the previous day, and after the manhunt had ended, decided to fly to Boston to perform his song live for the Fenway crowd, if the Red Sox would allow it. “Who’s going to turn him down?” said Red Sox manager John Farrell.5 As much as the crowd gets into it when the recording is played, the combination of having Diamond sing it live, along with the successful law-enforcement action of the day before, really pumped up the fans.

And so the Red Sox came to bat in the bottom of the eighth inning down by a run, but with the spirit of the crowd running high. Jonny Gomes pinch hit for Victorino to lead off the inning, and doubled. Pedroia drew a walk, but then David Ortiz hit into a double play, with Gomes advancing to third base. At this point, Kelvin Herrera was brought in to relieve Tim Collins. Herrera walked Mike Napoli, putting runners on the corners, and bringing up Nava, who had been picked off second base in the previous inning.

(Before his major-league debut on June 12, 2010, Red Sox radio broadcaster Joe Castiglione interviewed Nava for the pregame show, and told him, “Swing at the first pitch, because you’ll never get it back.”6 In that game, Nava did just that, hitting a grand slam into the Red Sox bullpen. He became only the second player to hit a grand slam on the first major-league pitch he saw, after Kevin Kouzmanoff in 2006.7 It seemed that Nava, whose path to the major leagues was far from normal, had a flair for the dramatic.)

As Nava stepped to the plate with two on and two out in the eighth inning, Fenway Park was buzzing with anticipation of the Red Sox tying the game, or taking the lead. With the count 1-and-1, Nava hit a fly ball to deep right-center field. “When I hit that ball I was yelling ‘Stretch, c’mon, get going!’” Nava said.8 As the ball sailed into the Red Sox bullpen, the Fenway faithful erupted as the Red Sox took a 4-2 lead.

Andrew Bailey relieved Buchholz in the ninth, giving up a lead off home run to Cain, and allowing two other baserunners, but eventually he earned the save.

The Red Sox would go on to win the World Series that fall, their third World Series win of the twenty-first century.  No doubt this game, and the events leading up to it, inspired the team throughout the season.