This article was written by John G. Zinn

It is perhaps fitting that the National League played its first game in Philadelphia, 100 years after the country was born in the same place. 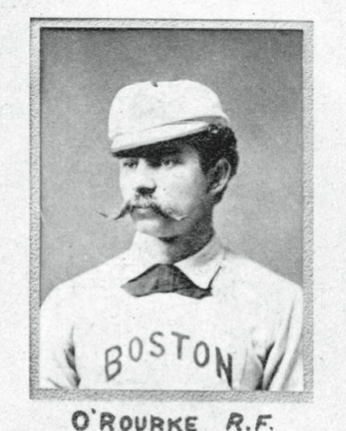 As with the nation itself, the new league’s founding fathers had multiple agendas. While ostensibly providing a solution to the National Association’s many ills, Chicago owner William Hulbert, the driving force behind the National League, was hardly a disinterested party. Hulbert had raided the rosters of the Boston and (Philadelphia) Athletics clubs in violation of National Association rules, and feared that the acquisitions would be canceled. Rather than risk such sanctions, he launched a preemptive strike under the guise of solving the old league’s problems.1

Although Hulbert raided the Athletic and Boston rosters, he wanted both clubs in the fledgling league. This was especially true of the Boston Red Stockings, managed by Harry Wright with his brother George Wright starring at shortstop. The new league’s leadership was less enthusiastic about the Athletics, but needed a team in Philadelphia.

The inaugural contest took place on Saturday, April 22, 1876 at the Athletics’ grounds at 25th and Jefferson, which had been improved at an estimated cost of $10,000.2 A crowd of about 3,000 was on hand in “favorable” weather. Although the new league was committed to prohibiting gambling, at least two news accounts showed that there was no shortage of betting going on.3

Boston scored the new league’s first run in the second inning, largely due to a bad throw by Ezra Sutton, the A’s third baseman. However, “fine hits” by the Athletics’ George Hall and Bill Coon tied the game in the bottom of the inning.

Boston struck again in its next at-bat, scoring twice on hits by Jim “Orator” O’Rourke and Tim Murnane, aided by a defensive lapse in the Athletic outfield. Good hitting and baserunning by Andy Leonard and George Wright added another run for the visitors in the fifth for a 4–1 advantage. While Boston built its lead, pitcher Joseph Borden set the Athletic club down in order in the third, fourth, and fifth innings. In the home sixth, however, William Coon, George Hall, and Wes Fisler led a rally that tied the score at 4–4.

Although the next two innings were scoreless, neither team lacked for opportunities. The home team had baserunners in both innings, but couldn’t score. Boston had even more chances, but was also turned away, especially in the eighth because of “a pretty double play.” Perhaps not surprisingly for an opening game, injuries became a factor. Sutton’s “rheumatic arm” led to his being moved to right field, with Bill Fouser going to second and Levi Meyerle to third. Boston had its own injury problems as catcher Tim McGinley’s eye was almost closed by a foul tip, but “pluckily” he stayed in the game.4 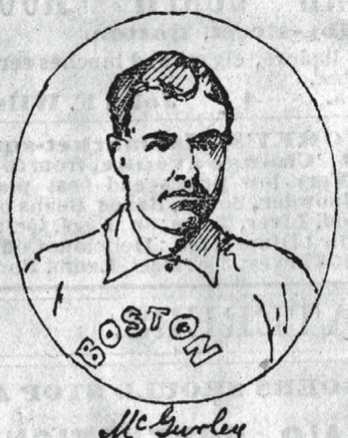 As the game headed to the ninth local newspapers described the excitement as “continuing at fever heat.” The “pretty double play” turned by the Athletic infield in the eighth proved to be a two-edged sword. Under the rules of the day the first Boston batter in the ninth was the player hitting after the runner who was put out on the bases for the third out. That allowed Murnane and Harry Schafer to bat again. Both came through with base hits and scored through “desperate baserunning” when Fouser, the Athletics’ new second baseman, couldn’t field Jack Manning’s hit.

The visitors took a two-run lead into the bottom of the ninth, but the Athletic club wasn’t finished. Lon Knight doubled, stole third, and scored on Force’s out to Bill Parks in left. Then Parks couldn’t handle David Eggler’s “difficult chance,” putting the tying run on second. Fisler hit a foul ball that McGinley, playing with one eye, somehow caught. Down to one last out, the Athletics got a reprieve when Boston third baseman Schafer muffed Meyerle’s grounder. That brought up Sutton, the “weak spot of the Athletics in this game.” He managed only a “feeble hit” back to the pitcher, who retired him at first.5 The Bostons were 6–5 winners.

While the game featured plenty of misplays and only three of the 11 runs were earned, the new league’s opener couldn’t have been more dramatic. Newspaper accounts agreed that defense and baserunning were the keys to Boston’s victory. The Athletic club didn’t have to wait too long for revenge, routing Boston two days later, 20–3.6

Although the large crowd and competitive opening game had gotten the National League off to a good start, there was plenty of uncertainty ahead. The Philadelphia team didn’t survive the season, refusing to incur the impending financial losses of the last Western trip and being expelled from the league. It would be six years before major-league baseball returned to Philadelphia.

The baseball futures of the players in that first game varied tremendously. One-third were out of the major leagues after 1876, including Tim McGinley, who stayed in that first game so heroically. The extreme case was Boston outfielder Bill Parks. His first National League game was his last major-league appearance. At the other extreme were George Wright and O’Rourke, who would be elected to the Hall of Fame. Murnane went on to a long and distinguished career as a sportswriter. Athletics outfielder George Hall participated in the league’s first scandal in 1877 as a member of the Louisville club. Yet somehow, and sometimes in spite of itself, the new league was there to stay.7 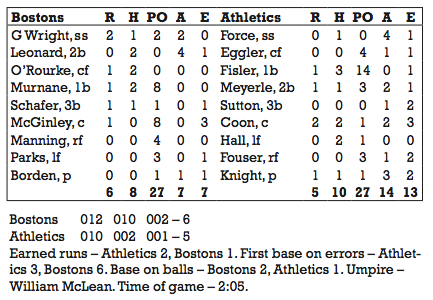