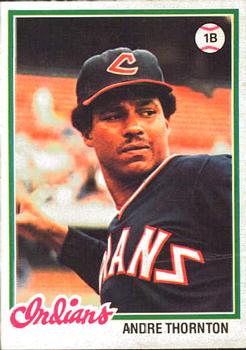 Thunder Thornton hit the ball
Over and against the wall.
Cleveland copied Boston style
Smashing them a Fenway mile.1

Spring had arrived in New England, and with it Red Sox baseball sprang anew. It was early in the 1978 season and optimism was high for a return to October baseball in Boston. Just three weeks earlier, the Red Sox had pried right-handed pitcher Dennis Eckersley and catcher Fred Kendall from Cleveland. Eckersley was the big prize; the right-handed pitcher was 40-32 with a 3.23 ERA in his three seasons wearing the Tribe threads.

In order to acquire the submarine-style pitcher, the Red Sox sent three top prospects from their farm system: pitcher Mike Paxton, infielder Ted Cox, and catcher Bo Diaz. Diaz (.263 BA, 7 home runs, 54 RBIs) and Cox (.343 BA, 14 home runs, 81 RBIs) were key players the season before as Pawtucket won the Triple-A International League pennant with an 80-60 record, but lost out to Charleston for the league championship. Paxton had begun the 1977 season with Pawtucket (5-0, 0.82 ERA) before being called up to Boston. He pitched well for the Red Sox (10-5, 3.83 ERA).

Also included in the package was veteran pitcher Rick Wise. The right-handed hurler had broken in with Philadelphia in 1964. After spending two years with the Cardinals, Wise was traded to Boston. He led the Red Sox in victories with a 19-12 record (3.95 ERA) in 1975, the last year the Red Sox won the pennant. He posted identical 1-0 records in the 1975 ALCS and World Series.

Wise was the starting pitcher for the Indians as they made their first visit to Fenway Park in 1978. He was off to an inauspicious beginning in his new home; his record was 0-2 with a 3.38 ERA. Both of his losses came against the Kansas City Royals.

The Red Sox came into the game with an eight-game winning streak, and were battling the Detroit Tigers for first place in the American League East Division. But Cleveland jumped all over Ripley in the top of the first inning. Paul Dade got the big inning started with a single to center field. Johnny Grubb walked. Buddy Bell singled to score Dade. Andre Thornton got aboard on an infield single, and an error by Boston shortstop Rick Burleson opened the door for Grubb to score and for Bell to take third base. Larvell Blanks doubled to deep center field to plate both Bell and Thornton. Red Sox fans were just nestling into their seats and the Indians had a four-spot literally right off the bat.

Ripley failed to retire a batter, and Boston manager Don Zimmer had seen enough. Zim went to the bullpen and brought in Bob Stanley. The right-hander recorded the first out of the inning when he struck out Willie Horton. Ron Pruitt followed with a single to left field to advance Blanks to third base. Blanks scored one batter later when Rick Manning grounded into a force play at third.

Wise took to the hill in the bottom of the inning and after a leadoff walk to Jerry Remy, he retired the side. Cleveland increased its lead to 6-0 in the top of the second inning. With two outs, Bell singled and scored when Thornton tripled to center field.

Cleveland’s 6-0 lead held up as Wise maintained control against his old mates. The Red Sox finally put up a run in the bottom of the fifth inning, on singles by George Scott, Dwight Evans, and Butch Hobson. Unfortunately for the Red Sox, it was as close as they would come to catching the Indians on this day.

Zimmer went to his pen again and brought in Jim Wright to begin the sixth inning. In the seventh, Thornton unloaded for his fourth home run of the year, a solo shot into the screen above the Green Monster.

The score remained 7-1 Tribe until the eighth inning. The Indians batted around and their six-run frame began and ended with a home run. Horton slugged his first homer as an Indian to lead off the inning against Wright. The scoring ended when Grubb smacked his second round-tripper of the young season, a three-run shot off reliever Tom Burgmeier. The veteran southpaw was the third reliever to emerge from the Sox bullpen in the game.

After Bell grounded out, Thornton stepped to the plate and launched a double to center field. It completed the cycle for Thunder, who became the first Indian to hit for the cycle since Tony Horton on July 2, 1970, against Baltimore.

Wise left the game after seven innings. He surrendered one earned run, struck out one, and walked two to chalk up his first win in an Indians uniform. Indians manager Jeff Torborg turned the game over to Rick Kreuger. The 29-year-old lefty was also facing his former team. He had been traded from Boston to Cleveland just a month earlier for shortstop Frank Duffy. Krueger finished the game. He gave up three runs in two innings. All three runs came courtesy of a three-run homer off the bat of Scott. It was Boomer’s second home run of the season.

The final score was Cleveland 13, Boston 4. Ripley took the loss, his first of the season. He was charged with five earned runs, and no innings pitched.

“It’s always nice when the team performs well,” said Thornton. “We know we’ve got a long way to go. Not many people think much about us.”2

“It was very gratifying,” said Wise of his first win. “I made enough good pitches early in the game to keep them off balance. Any team can be neutralized. But I didn’t feel that good. Except for a good slider. I wasn’t locating my pitches anywhere near where I wanted. My slider was my out pitch. I wasn’t able to attack Boston like I wanted.”3

In the Boston clubhouse, Zimmer was asked what he thought of Wise’s performance. “I thought Bob Stanley pitched well.”4 When he was asked if he understood the question, Zimmer replied, “I did and you got your answer.”5

Boston fought tooth and nail all season with the New York Yankees for supremacy in the American League East Division. They ended the season tied for first with 99-63 records. A one-game playoff was held at Fenway Park on October 2, with the Yankees beating Boston, 5-4, and claiming the pennant.

The Indians finished the season in sixth place with a record of 69-90. Wise did not have one of his greatest years, finishing with a record of 9-19 and a 4.34 ERA. Those 19 losses led the league.

The author accessed Baseball-Reference.com (baseball-reference.com/boxes/BOS/BOS197804220.shtml) for box scores, play-by-play information, and other data, as well as Retrosheet (retrosheet.org/boxesetc/1978/B04220BOS1978.htm).