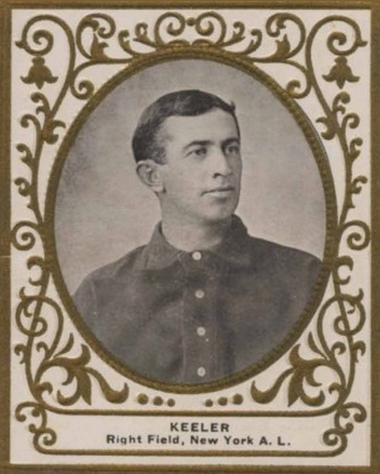 The Washington Senators were dead last in the American League in 1904 with a 38-113 record. The league, which had taken over the struggling franchise, sold a majority stake in the team to a group of Washington investors in January 1905.1 The Senators were renamed the “Nationals” in March to revitalize their image.2 AL president Ban Johnson selected Jake Stahl, the team’s 26-year-old first baseman, as the team’s new manager, despite his inexperience.3 Stahl was realistic in his outlook: “I think Washington will win a few more games, anyway, than we won last year,” said the “boy manager.”4 The new owners promised the players a $1,000 bonus if the team finished higher than last place in 1905.5

On Tuesday, April 25, 1905, the Washington Nationals played the New York Highlanders at New York’s American League Park (also known as Hilltop Park). The most experienced man in the Washington lineup was catcher and coach, Malachi Kittridge, in his 15th major-league season. On the mound was a tall (6’1”) right-hander named “Long Tom” Hughes. Stahl at first base and Joe Cassidy, an impressive 22-year-old shortstop, were the stars of the infield, with Jim Mullin at second base and Hunter Hill at third. Big Frank Huelsman was a power hitting left fielder. Charlie Jones, a speedy center fielder, and right fielder Denny Sullivan, were fresh faces from the American Association.

The 1904 New York Highlanders finished in second place with a 92-59 record, a game and a half behind the Boston Americans. Clark Griffith, a 35-year-old pitcher, was in his third season as the Highlanders manager in 1905. On April 25, the New York battery was 41-year-old catcher “Deacon” Jim McGuire (the oldest player in the major leagues) and right hander Walter Clarkson, a former ace of the Harvard team. Except for Hal Chase, a 22-year-old rookie, at first base, the New York infield and outfield were replete with veterans: Jimmy Williams (second base), Kid Elberfeld (shortstop), Wid Conroy (third base), Pat Dougherty (left field), John Anderson (center field), and Willie Keeler (right field).

The diminutive (5’4”) Keeler batted .343 in 1904, second best in the league; his motto was “Hit ‘em where they ain’t.”6 The team survived a harrowing spring-training trip in March 1905. En route from Vicksburg, Mississippi, to New Orleans on a stormy night, a train carrying 11 members of the team derailed atop a high trestle. Jimmy Williams alertly pulled the bell rope to sound the danger signal, and the engineer stopped the train before it could plunge into the chasm below. The players were “terror stricken” but unharmed.7

Umpire Tom Connolly said, “Play ball!” and the game of April 25 was under way. The Nationals got on the scoreboard in the top of the first inning when Cassidy singled in two runs. The Highlanders scored two in the bottom of the inning by a hodgepodge sequence: a walk, a stolen base, a wild pitch, a bunt single (by Keeler), two fielding errors, a sacrifice, and an infield hit (by Chase). In the top of the second, Kittridge drove one over Keeler’s head in right field for a double, and Hughes followed with a long home run to give Washington an early 4-2 lead. It was the first home run over the “left central palisade” in the ballpark’s two-year history.8

After two innings, Griffith had seen enough of Clarkson and brought in Bill Hogg, a 23-year-old right hander, to make his major league debut. The youngster won 33 minor league games in the Pacific Northwest in 1904. Over the next four innings, he allowed no hits and struck out five. His “puzzling side arm delivery with good control and great speed … baffled the Washingtonians.”9 He doffed his cap “in recognition of the applause” he received from the New York fans,10 estimated to be 5,000 in number.11 Meanwhile, the Highlanders scratched out two more runs with help from the Nationals. Conroy drew a walk in the fourth inning, and when he attempted to steal second base, Washington made two errant throws, allowing him to come all the way around to score. In the sixth inning, the Nationals had Williams in a rundown between third base and home, but they botched the play and Williams scored the tying run.

In the top of the seventh inning, the Nationals got to Hogg for one run on three hits to take a 5-4 lead. Anderson led off the bottom of the eighth with a blast to deep center field. He “thoroughly earned a home run … but was robbed of it by Jones’ marvelous galloping catch.”12 Jones ran into the fence but hung onto the ball. Conroy followed with a triple to the right-field fence, and was brought home by Chase’s crisp single through the right side of the infield.

The score was tied 5-5 when Keeler stepped to the plate with the bases empty and one out in the bottom of the ninth. He drilled a pitch from Hughes into the gap in right-center field, and the ball reached the fence. Sullivan retrieved it and fired a throw in to Mullen. The speedy Keeler flew around the bases and crossed home plate standing up, just ahead of Mullen’s relay to Kittridge. The final score was New York 6, Washington 5. Hogg earned his first major league victory, and Hughes was the losing pitcher. Keeler’s walk-off inside-the-park home run was his fourth hit of the game.

It was a triumphant day for the Highlanders. Before the game, they placed a bet on a horse named “Clark Griffith” to win the sixth race at the Jamaica (New York) racetrack. After the game, they learned that the horse had won the race. The two-year-old colt, which belonged to Highlanders owner Frank Farrell, got its name after kicking a stablehand. Farrell named it after the Highlanders manager, who was known for “kicking,” i.e., protesting umpires’ calls.