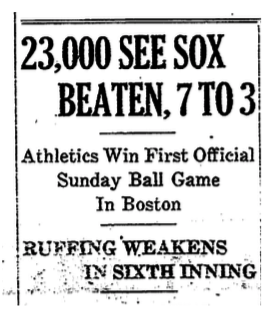 By the late 1920s, the longstanding prohibition against playing baseball on the Sabbath had largely evaporated. Not surprisingly, Puritan Boston was one of the last major-league locales to sanction attendance at Sunday rites in the Green Cathedrals of the national pastime.1 By order of the people, as expressed through a November 1928 statewide ballot question, Sunday baseball would thenceforth be permitted throughout the state, provided that no regular place of worship was located within 1,000 feet of the playing field.2

The Unitarian Church of the Disciples was located at the corner of Peterborough and Jersey Streets, within the shadow of the American League park in the eponymous Fenway section of Boston.3 Arrangements were therefore made to have the Red Sox make use of Braves Field for their Sunday games, as it was conveniently located a mere mile to the west along Commonwealth Avenue.

The Devil Fools With The Best Laid Plans

The original plan called for the American League upstarts to wait their turn. Boston’s Braves were to introduce Sunday baseball in a game scheduled for April 21. One final protest from the heavens was registered in what was proving to be the extraordinarily wet spring of 1929,4 and the scheduled game between the unbeaten Braves and the Giants was rained out.5 Thus, the Red Sox and the Philadelphia Athletics stumbled into history one week later.

Unbeknownst to the Red Sox and their fans, Athletics shortstop Jimmy Dykes had apparently made a deal of sorts with the devil, and sent Boston fans home disappointed after garnering a pair of doubles, a home run, and two runs batted in, all while scoring a pair.

The day had started with brighter forecasts, as the Boston Post predicted that “the Red Sox may get away with it today as the weather man calls for fair weather.” Plans were “being made to handle an enormous crowd of baseball fans at Braves Field.”6 The box office opened at 9 A.M. to accommodate those not inclined to attend church, and the gates were opened at 12:30 for the 2:30 start, so that those having partaken of religious services could immediately refocus their faithful prayers.

Ed Morris was slated to pitch for the hometown nine, against either George “Rube” Walberg or Eddie Rommel, one of the pioneers of the modern knuckleball. Morris, however, was felled by a bad cold and Red Sox manager Bill Carrigan tapped Charlie “Red” Ruffing in his stead. The weather forecast was equally unreliable: “(T)he game was played under a gray, watery looking sky which threatened rain at any moment. If the weather had been bright and sunny, it is safe to say that at least 35,000 clients would have crowded into the big ball yard.”7

American League President E.S. Barnard was on hand to witness history and had barely settled into his seat when Philadelphia’s Max Bishop, the first batter of the game, doubled to right field. Catcher Mickey Cochrane, a local favorite because he was a native of Bridgewater, Massachusetts, followed, smashing a ball at Red Sox third baseman Bob Reeves that proved too hot to handle. Philadelphia left fielder Al Simmons then poetically brought home Bishop with a sacrifice to deep center, a fitting first score in the annals of Boston Sunday baseball.8

Thereafter, the baseball gods remained quiet until the bottom of the third inning, when the Red Sox scratched out two runs against Rommel after there was one out. Philadelphia right fielder Bing Miller lost the ball in the clouds and made “an inglorious two base muff of Ruffing’s fly to right.”9 Red Sox center fielder Jack Rothrock singled, advancing Ruffing to third. Shortstop Hal Rhyne singled to left, scoring Ruffing, and Russ Scarritt followed with a bloop single to center that brought home the second run. Right fielder Doug Taitt killed the rally, blazing one back to Rommel, who threw to Dykes, who then fired to Jimmie Foxx for a double play.

The Sky is Falling

Ruffing, the Red Sox’ starter, had not yet blossomed into the Hall of Fame hurler he became for the New York Yankees and, according to one observer, seemed “to pitch better when his team is trailing than he does when it is out front.”10 On this first Boston baseball Sunday, Ruffing began to unravel with one out in the sixth inning.

Simmons doubled, then went to third on a sacrifice by third baseman Sammy Hale. Foxx drove him home with a single to center.11 Miller gained some redemption for his earlier fielding transgression by blasting the first pitch he saw for a home run to left field. Dykes followed with the same result, having at least had the decency to hold off until Ruffing’s second offering.

The Sunday crowd had been boisterous in its support of the Red Sox, particularly after they “pulled off two lightning double plays”;12 but heading into the home half of the sixth, the carnival atmosphere had dissipated as there “was almost a cathedral quiet in the huge park.” It became so quiet “you could almost hear the Sabbath stillness so intense did it become.”13 The Red Sox pushed back modestly in the bottom half of the inning when left fielder Russ Scarritt doubled and second baseman Bill Regan tripled him home.

One Last Gasp, Then Oblivion

The Red Sox still had some life in them in the seventh. First baseman Phil Todt led off with a single and after pinch-hitter Kenny Williams fell victim to a fine play by Bishop at second, Elliot Bigelow pinch-hit for Milt Gaston and blasted a ball into the teeth of the wind to the base of the center-field wall. Todt, concerned that the ball might be caught, advanced only to second on the double.14 Bill Narleski, a speed merchant, ran for Bigelow, but Rothrock struck out and Rhyne grounded out, and “Boston’s chances went up the spout.”15

Rookie Eddie Durham came on to pitch the last two innings for the Red Sox and “was touched up fairly heavily.”16 With one out, he made a wild throw to first base that allowed Foxx to reach base. After Durham righted his ways and threw out Miller, Jimmy Dykes doubled again and pitcher Rommel singled, bringing home the final two runs of the contest. The defensive play of note was a spectacular one-handed grab for the second out in the ninth by favorite son Cochrane, who reached into the third-base dugout to snare the foul pop of pinch-hitter Bob Barrett.

As anticipated, the arrival of Sunday baseball in Boston had a discernible impact upon attendance. Total attendance for the 1929 last-place edition of the Red Sox was 394,620. More than 100,000, or 25-plus percent of those attendees, were accounted for in four Sunday games: the inaugural contest against the Athletics, and May, June, and September contests against the New York Yankees.17 The notion of giving fans the opportunity to attend a game on what was for many their only day of leisure, made both sense and dollars and cents. It also made the schedulers’ job much easier.18

Woven into all of this success, however, was the vision of a challenge that lay ahead. Game accounts, particularly one by Burt Whitman, noted not only the large numbers in attendance, but also the large numbers attending by auto. “A remarkably large part of the crowd – a much bigger percentage than on week days – evidently motored in from various outlying points for the contest. … The neighborhood streets on which parking was permitted were congested with more cars than we’ve seen since the B.A.A. marathon run.”19 This pattern would be repeated with the advent of night baseball (which arrived some 18 years later in Boston), and the increase in the use of automobiles for commuting to games would accentuate the inadequacy of parking facilities around a number of the jewel box ballparks, ultimately leading to the demise of many.

If members of the Baseball Hall of Fame are the patron saints of the national pastime, there were more than a few apparitions on the day of this first Sunday contest in Boston. Foxx, Simmons, Cochrane, and Ruffing all took the field and of course Connie Mack himself was in the dugout, opining after the game that “I like the looks of my own club.”20 He was right. The Athletics would win the World Series that year.

One final note from this history-making contest: Early in the game, public-address announcer Stonewall Jackson (undoubtedly a Yankee hater) announced that no inning would start after 5:40 P.M., in order to assure compliance with the 6 o’clock closing law. He need not have bothered. The elapsed time for the game? One hour and 40 minutes.21 Amen!

1 Pennsylvania was the last jurisdiction with a contingent of major-league teams to allow Sunday baseball.

2 The text of the referendum question may be found at “Questions of Interest on the Ballot this Fall,” Boston Globe, October 30, 1928, 13. After more than a modest amount of controversy, the Boston City Council voted to exercise the local option afforded to it by the referendum question, thereby permitting professional baseball to be played within the city limits on Sunday for the first time. The City Council’s vote (and associated allegations of attempted extortion) afforded yet another opportunity for the tensions between old-line Boston Brahmins and the ruling Irish political class to play themselves out, this time with Braves owner Judge Emil Fuchs in the middle. This particular debacle is recounted in Robert S. Fuchs and Wayne Soini, Judge Fuchs and the Boston Braves (Jefferson, North Carolina: McFarland & Company, 1998), 63-67.

15O’Leary, “Athletics Victors in Sunday Clash.” Although the newspaper account spelled it Narlesky, the player was Bill Narleski, who was the father of future major-league pitcher Ray Narleski.

18 Nor did it have the negative impact on the Brooklyn franchise predicted by some. Brooklyn for years had enjoyed 20 to 23 Sunday home dates in a typical 25-week season. Now for the first time, Brooklyn would have to play on Sunday in Boston and would also lose the opportunity to play one-game series against teams that would did not wish to linger in Beantown. Brooklyn’s 1929 attendance actually increased by almost 70,000 over 1928 totals. For details, see “Clergyman Clears Name of Baseball,” The Sporting News, November 15,1928, 1, and baseball-reference.com/teams/BRO/1929-schedule-scores.shtml. Retrieved December 15, 2014.