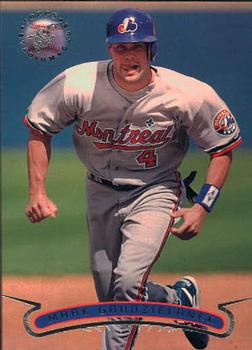 The Montreal Expos of the 1990s operated on a shoestring budget, but manager Felipe Alou — who took over the team during the 1992 season — still was able to mold his teams into contenders in the early years of his tenure. In 1993, his first full season at the helm, he guided the Expos to a 94-68 record and a second-place finish in the NL East. In 1994 Montreal’s 74-40 record was the best in the majors when the players strike ended the season, but a fire sale of star players caused the team to regress to 66-78 in 1995.1

Most prognosticators expected Montreal to finish last in the division in 1996. The Expos ignored the so-called experts and stormed out of the gates to a 17-9 record in the season’s first month. Victory number 17, a 21-9 rout of the Colorado Rockies at Coors Field on April 28, was punctuated by two grand slams, which paced the Expos to a new team record for runs scored in a game. Though the Expos lost their final game of the month to the New York Mets, they stood in first place on May 1, which prompted Alou to say, “At least we were the kings of April.”2

Montreal entered the Colorado series on a seven-game winning streak that had included three walk-off wins against three different teams (Pittsburgh, St. Louis, and Cincinnati), and a victory in the first game of this series extended the mark to eight. Colorado ended the streak the next night by giving the Expos a taste of their own medicine with a 6-5 walk-off victory in 13 innings. Worse than the defeat for Montreal was the loss of center fielder Rondell White, a budding young star, who injured both a kidney and his spleen crashing into the outfield wall after a magnificent diving catch of a drive by Larry Walker in the sixth inning.

The Expos took out their anger over losing White in the third game. It began innocently enough with a groundout by leadoff batter Mark Grudzielanek, but the bottom then fell out for Rockies starter Bryan Rekar. After Mike Lansing singled and Henry Rodriguez doubled, Rekar hit Moises Alou with a pitch to load the bases, then walked David Segui, forcing Lansing home for the Expos’ first run. Darrin Fletcher stepped to the plate and launched a grand slam to deep right field to give Montreal a 5-0 lead. F.P. Santangelo extended the margin to 6-0 as he followed Fletcher’s blast with a solo homer, but the Expos were still not finished. Dave Silvestri worked a walk, advanced to second on pitcher Kirk Rueter’s sacrifice bunt, and scored on a single by Grudzielanek before Lansing flied out to end the top half of the inning.

Rueter set the Rockies down in order in the bottom of the first, and it appeared as though Rekar might fare better when he retired Rodriguez and Alou to start the second inning. That was not to be the case. Though the inning would not turn out quite as disastrously as the first, Rekar did not escape unscathed. Segui singled and scored when Fletcher followed with a double for his fifth RBI of the game, which tied his career high. Santangelo then singled to drive in Fletcher, giving Montreal a 9-0 lead.

After Colorado managed only a walk to VinnyCastilla in its half of the second, the Expos knocked the Rockies’ starter out of the game in the third. Rekar did not help his own cause when he walked Rueter to start the frame. Rueter advanced to second on a single by Grudzielanek and scored two batters later on a hit by Rodriguez. When Rekar walked Alou to load the bases, Rockies manager Don Baylor pulled him and sent Lance Painter to the mound in relief. Painter allowed the Expos to go ahead 11-0 when he walked Segui to score Grudzielanek, but he retired the next two batters to end the inning.

The number 11 stood out because it recurred in several instances during the game. Not only was it the number of runs surrendered by Rekar, but the Expos also ended an 11-inning scoreless streak by sending 11 batters to the plate in the first inning.

The Expos’ scoring barrage was so stunning that it damaged both Rekar’s ERA and his psyche. The second-year starter’s ERA ballooned to 13.97 for the season, and he was optioned to Triple-A Colorado Springs after the game.3 Rockies pitching coach Frank Funk said, “He was relieved when we told him [he was being sent down],” and Baylor added, “His confidence probably sank to its all-time low.”4

The Rockies managed to score their first run in the bottom of the fourth inning, but the Expos answered with three more runs of their own in the top of the fifth as Santangelo added to his RBI total with a double that drove in Rodriguez, Alou, and Fletcher. A solo homer by Rockies catcher Jayhawk Owens in the bottom of the fifth still left Colorado with a 14-2 deficit.

The Rockies dared to score another run in their half of the seventh, and the Expos responded with a new torrent of runs against reliever Mike Munoz in the top of the eighth. The fireworks began when Andy Stankiewicz hit a two-out double to knock in Silvestri, who had drawn a one-out walk. After Rodriguez walked, relief pitcher Dave Veres joined the hit parade with a bases-loaded single that scored Grudzielanek. Munoz found out how Rekar must have felt during the first inning when Segui smashed the Expos’ second grand slam of the game to make the score 20-3 in favor of the visitors. The Rockies waited too long to turn the game into a typical two-team Coors Field slugfest, but they did manage two solo homers against Veres in the bottom of the eighth.

Montreal joined the 21 Club in the ninth when a single by Grudzielanek drove home Santangelo, who doubled to lead off the inning. Though the Rockies attempted to add some excitement for their fans by scoring four runs in the bottom of the ninth, Mel Rojas finally induced a double-play grounder from Vinny Castilla to end the game as a 21-9 Expos triumph.The Expos had pounded out a season-high 20 hits and had drawn eight walks and a hit batsman en route to scoring a team-record 21 runs that bested the previous franchise mark of 19 (accomplished six times previously). White’s replacement in center field, F.P. Santangelo, responded with a 4-for-6 performance that included two doubles, a home run, and a career-best five RBIs. Fletcher matched Santangelo’s RBI total, but both were outdone by teammate David Segui, who finished with six RBIs and hit Montreal’s second grand slam of the day.

The game also marked Montreal’s 17th victory in April, which set a club record for that month. David Segui and Henry Rodriguez had won back-to-back NL Player of the Week awards in April, and the Expos led the NL in batting average, runs scored, home runs, RBIs, and slugging percentage. Felipe Alou said, “We were picked to finish last with the lowest payroll in baseball, but we’re having fun right now. I know that I’m having fun.”5

Alou had earned his fun, having toiled for 12 years as a manager in the Expos’ minor-league system and for an additional three years as an Expos coach before replacing Tom Runnells as the team’s skipper after Runnells was fired 37 games into the 1992 season. Kevin Malone, Montreal’s general manger in 1994 and 1995, praised Alou when he asserted, “As far as enabling young players to reach their potential and be the best they can be, he’s the best in the business.”6

Alou took his squad to greater heights in 1996 than most people had anticipated as he steered them to an 88-74 record, but they had to settle for second place, eight games behind the Atlanta Braves. As Alou had said after his team’s 21-9 drubbing of Colorado, “We kicked some butt in April. You never know what May brings, but at least we had that.”7

3 Rekar divided his time between Denver and Colorado Springs the entire season. He had an 8.95 ERA with the Rockies that year.