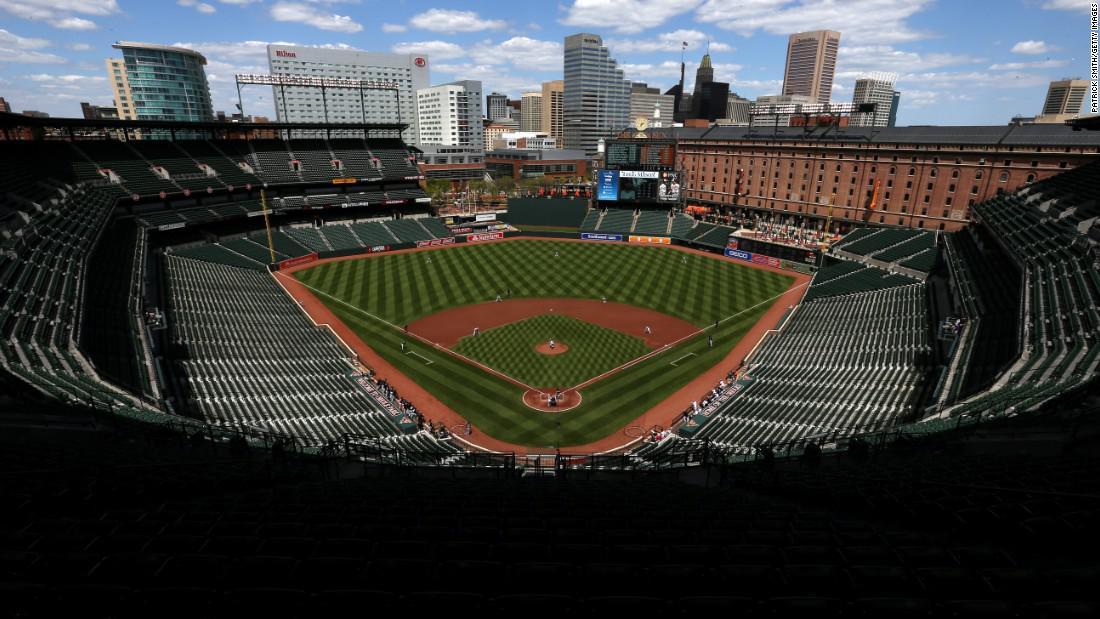 In the aftermath of a terrible citywide tragedy, the Baltimore Orioles tried to help baseball return to normalcy with a game at Camden Yards — in front of no one.

Protests and riots in Baltimore following the death in police custody of a 25-year-old African-American named Freddie Gray on April 12, 2015, had created security concerns among overtaxed law enforcement resources. So Major League Baseball sent out the following press release: “After conferring with local officials, it was determined that Wednesday afternoon’s game [between the Orioles and White Sox] should be played without fan admittance in order to minimize safety concerns.”1 Maryland’s Governor Larry Hogan had declared a state of emergency and activated the National Guard “in an attempt to restore order.”2 The previous two games had already been postponed amid ongoing riots across Baltimore; they would be made up in a later doubleheader. The start time of this game was also changed, from 7:05 P.M. to 2:05 P.M., since a citywide 10:00 P.M. curfew had been mandated by city officials. The game was closed to the public. This did not mesh well with Baltimore’s appellations “Charm City” and “ the Land of Pleasant Living,” and, as Orioles slugger Chris Davis remarked, “This isn’t the way you want to make history.”3

The decision by Major League Baseball meant that there was no one to root, root, root for the home team. Even though no fans were allowed in the stadium, the press box filled 3½ hours before the scheduled first pitch.4 There were two scouts behind home plate and a few photographers scattered throughout the ballpark, but “the 45,971 seats and three decks at Camden Yards were an empty expanse of green.”5 One tradition at Orioles’ home games for decades is a mass shouting of “Ohhh” at the start of the line in the national anthem: “O say, does that star-spangled banner yet wave. . .” About three dozen fans stood outside the stadium, peering through the iron fence, and they shouted their “Ohhh” at the right moment.6 No ushers were present. No beer vendors. No peanuts or hot dogs. Even the national anthem, normally sung in person, was recorded.

The contest marked the first time “in the history of the four major American professional sports leagues that a game was played to an intentionally empty stadium.”7 There was, however, a precedent for postponing games because of civil unrest. Opening Day of the 1968 season8 was postponed due to the Reverend Martin Luther King Jr.’s funeral. The Los Angeles Dodgers postponed four games in April and May 1992 after the Rodney King verdict announcement.9 The 2001 season was delayed in September after the terrorist attacks at the World Trade Center and Pentagon. The Boston Red Sox postponed a game on April 19, 2013, in an effort to support law-enforcement efforts to apprehend the Boston Marathon bomber.10 However, all of those postponed games were open to fans when they were made up.

The official attendance for the match between the Orioles and White Sox was zero. The previous low mark in attendance at Baltimore also involved the White Sox. It was a makeup game played on August 17, 1972, at Memorial Stadium, before a meager crowd of 655 fans, even though Baltimore was in first place at the time. This game also broke the previous major-league low attendance record of six. That’s right; six fans officially attended a game on September 28, 1882, between the Troy Trojans and the Worcester Ruby Legs. The Ruby Legs folded at the end of their 18-66 season.11

Ubaldo Jimenez started for the Orioles. He retired the White Sox in order in the first, striking out Adam Eaton and Jose Abreu. No one cheered. In the bottom of the first, Chicago starter Jeff Samardzija got into trouble immediately. He walked Alejandro De Aza. Jimmy Paredes reached on an error by Abreu at first, and Delmon Young singled to center, loading the bases. Adam Jones sent a ball to right field, deep enough for De Aza to score on the sacrifice fly. Davis then crushed a three-run home run to deep right field. No fans scrambled after the souvenir. Only a lone television cameraman stood anywhere close to the ball.12 Davis said, “I’ll take any home run I can get at any time I can get it, but it’s definitely more fun when there are fans in the stands.”13  Manny Machado kept the inning going with a double to center. Everth Cabrera traded places with Machado with an RBI double to left. Caleb Joseph singled, driving in Cabrera. An out later, De Aza singled, and then Paredes grounded out to end the inning. Baltimore had sent 11 men to the plate and had scored six runs (five earned). De Aza had reached base twice.

Baltimore added a run in the third, when Machado singled, Cabrera doubled, and Joseph singled for his second RBI of the game. Jimenez dominated until the fifth inning, but then he ran into some trouble. Adam LaRoche walked, Avisail Garcia was safe on an infield single to third base, and Alexei Ramirez reached on a two-base throwing error by Machado, allowing LaRoche to score. Geovany Soto grounded out to the shortstop, and Garcia scored on the play. Both Chicago runs were unearned.

Machado atoned for his fielding miscue by homering in the bottom of the fifth, and the score was 8-2, where it would stay. Samardzija was tagged for seven earned runs in five innings. He took his second loss of the season. Jimenez won for the second time, scattering three hits with a walk in seven innings, and he struck out six White Sox.

Offensively for the Orioles, Davis had the big blow in the first inning, his fifth homer of the young season. Machado was 3-for-4 with three runs scored. Cabrera and Joseph each had two hits. Baltimore had an 11-hit attack and left only four men on base.

Davis tried to make the best of this bizarre set of circumstances. One of his first-base routines was to toss a ball to fans as he came off the field. In this game, he sent the balls to imaginary fans. “I threw three or four into the lower seats and then I gave some love to the fans in the upper deck,” Davis mused after the game.14

The eeriness in the ballpark sparked comment. White Sox manager Robin Ventura told reporters, “It was just a surreal environment. I don’t think we really want to play another like this. …I don’t think [the Orioles] do either.”15 Baltimore closer Zach Britton remarked that “it was tougher to stay focused on the game than I thought it would be. The noise just echoed off the [B&O] warehouse. … It makes you appreciate the fans who come out and support you.”16 Britton added, “It felt like we were playing in a ghost town.”17 Caleb Joseph said, “Between innings was the most awkward part of the game. You’re used to the Kiss-Cam and all the other between-innings entertainment.”18 John Denver’s “Thank God I’m a Country Boy” played as usual during the seventh-inning stretch, but there were no fans to sing along. Baltimore manager Buck Showalter said, “The bullpen phone could be heard ringing more than 400 feet from the dugout.”19

Jay Jaffe, writing for Sports Illustrated, argued that “in the grand scheme of things, the procession of the baseball season is a comparatively minor matter relative to the safety of the general public. Just the same, being able to play games as scheduled is a sign of normalcy and order. Here’s hoping both return to Baltimore as soon as possible.”20 Showalter tried to sum up the day: “We’ve made quite a statement as a city, some good and some bad. Now, let’s get on with taking the statements we’ve made and create a positive.”21 Orioles center fielder Jones added, “We need this game to be played, but we need this city to be healed first. That’s what is important to me, that the city is healed because this is an ongoing issue. I just hope the community of Baltimore stays strong, the children of Baltimore stay strong and get some guidance and heed the message of city leaders.”22

In addition to the sources mentioned in the Notes, the author consulted Baseball-Reference.com and Retrosheet.org. Photo credit: CNN/AP.

7 McFarland, “That Was the Strangest.”