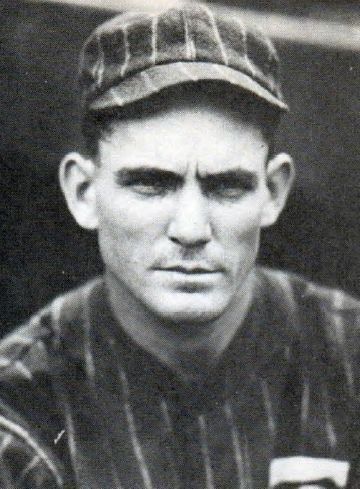 On Sunday, April 30, 1922, more than 25,000 fans packed Navin Field to see the Tigers play the Chicago White Sox. Since the crowd exceeded the park’s stated capacity of 23,000, Tigers management stretched rope barriers in front of the outfield fence to accommodate the overflow. Special ground rules were instituted for the contest, in which a batter was awarded two bases on a fly ball hit into the standing-room area behind the ropes. With two inexperienced starting pitchers, Detroit’s Herman Pillette and Chicago’s Charlie Robertson, on the mound, the crowd no doubt expected a high-scoring game.

Charlie Robertson had compiled a mostly uneventful career up to then. He made his debut in 1919, starting one game for the White Sox and lasting only two innings. Robertson spent 1920 and 1921 in Minneapolis, going 18-16 and 17-15 and pitching more than 300 innings each year. This performance earned him an invitation to training camp the following spring, and Robertson pitched so well that White Sox manager Kid Gleason put the 26-year-old in the starting rotation. Robertson’s assignment against the Tigers on April 30 was only his fourth start, and fifth appearance, in the major leagues.

The contest started uneventfully, with the crowd hooting its usual insults at the White Sox in general and the rookie pitcher in particular. Robertson ignored the commotion and breezed through the first, striking out Lu Blue, getting George Cutshaw on a popup, and retiring Detroit’s player-manager Ty Cobb on a grounder to third. The next three innings followed the same script, with the ever-dangerous Cobb ending the fourth with a weak fly to Johnny Mostil in left. The rookie pitcher had retired the first 12 batters.

Detroit’s Herman Pillette, who like Robertson was pitching in his fifth major-league game, gave up two runs in the second when he walked Harry Hooper, watched Mostil beat out a bunt, and retired Amos Strunk on a sacrifice. Earl Sheely then drove a shot off the glove of Bob Jones at third, scoring both Hooper and Mostil and giving the White Sox a 2-0 lead. There would be no more scoring in the game.

Staked to a lead, Robertson kept the hard-hitting Tigers off the bases. Said Robertson to a reporter several weeks later, “I never was going better in my life than that day. Everything worked properly. I was able to put the ball right where I wanted it. … You see, it was just perfect concentration of mind and body.”1 Robertson did not know the hitters, but catcher Ray Schalk, who had already caught three no-hitters in his 11-year career, did. He gave the signals and Robertson hit the mark, pitch after pitch.

In the fifth, the trouble started. Robertson disposed of Bobby Veach for his 13th out in a row, but the next batter, Harry Heilmann, protested to home-plate umpire Frank Nallin that Robertson was either discoloring the ball or using some foreign substance. Heilmann demanded that Nallin inspect the ball, but the umpire found nothing wrong. Heilmann went out on a weak bounder to the pitcher, which only made him complain louder. One inning later, Cobb stalked to the mound to examine Robertson’s clothing, but once again Nallin and first-base umpire Billy Evans saw no cause for concern. “The irrepressible Tyrus inspected all parts of Robertson’s uniform,” wrote Irving Vaughan in the Chicago Tribune. “He was foiled again, but even after it was all over he still insisted there was something wrong. To a spectator it sounded like the squawk of a trimmed sucker.”2 The Tigers continued to argue, and in the eighth the Detroit manager demanded that Evans check the glove of first baseman Sheely. Evans found nothing and the game resumed, though Cobb took a ball out of play to send to the league office for inspection.

The mood of the Detroit crowd changed markedly by the start of the eighth inning. Until then the fans had booed the rookie pitcher with their usual lusty exuberance, but after the Chicago right-hander had retired the first 21 Tigers in succession, they did an about-face. Now the Detroiters started pulling for Robertson to complete the rarest of pitching feats. When Veach opened the eighth by taking a called third strike and Heilmann rolled a weak grounder to Eddie Collins at second, the crowd became strangely quiet. Jones drove a grounder to Sheely at first to end the inning, bringing an excited cheer rolling from the stands. The fans had shifted their allegiance to Robertson, and waited impatiently for Pillette to retire the White Sox in the top of the ninth.

Cobb, anxious to break the spell, sent two left-handed pinch-hitters to the plate in the ninth. Danny Clark, batting for shortstop Topper Rigney, struck out, Robertson’s sixth whiff of the game. Clyde Manion popped out to Collins, and then Johnny Bassler, batting for Pillette, stepped to the plate.

Robertson said later that he did not fully realize that he was one out from perfection until Bassler stepped in. “It suddenly dawned on me,” Robertson said, “that I was standing right on the brink of the thing. … I turned and walked over to [Eddie] Mulligan, who was playing on the infield in that game. ‘Do you realize that that funny little fat guy is the only thing between me and a perfect game?’”3 Mulligan turned the pitcher around and gave him a push back to the mound. “I went in and served one up,” he said, “the fat guy swung and the ball sailed into Mostil’s hands in the outfield.”4 The fifth perfect game in major-league history was complete.

Onlookers claimed that they had never heard such a roar for an opposing player. Some of the Detroit fans gave Robertson the ultimate honor when they caught up to the pitcher before he had crossed the first-base line on the way to the dugout. They hoisted Robertson on their shoulders and carried him off the field.

Most no-hitters require at least one spectacular fielding play to keep the streak of hitless batters alive, but Robertson’s effort did not. Only six balls were hit to the outfield, and the only mild threat came in the second inning, when Mostil reached into the roped-off section of the crowd in deep left and snagged a fly off the bat of Bobby Veach. Many later game accounts credit Mostil with a spectacular catch, but as Harry Bullion of the Detroit Free Press reported, “The crowd in that sector spread to make the Sox left fielder’s feat easy to perform.”5 Fifteen batters were retired on the infield, and six Tigers struck out, including Cobb. According to Irving Vaughan of the Chicago Tribune, “When Cobb was at bat in the seventh, he did a lot of talking about the alleged soiled ball, and he was so centered on that subject that he neglected to connect when the third strike went floating by.”6

Unofficially, Robertson threw only 90 pitches, and as Bullion wrote, “He never was in the hole to a batter and consequently did not feel obliged to groove a pitch to avoid passing a man.”7 Though Cobb, still complaining to anyone who would listen, delivered some game balls to the league office, the baseball world celebrated the rookie’s feat. Robertson’s total dominance led historian John Thorn to call his performance “perhaps the most perfect game ever pitched.”8

Robertson ended his rookie season with a 14-15 record for the fifth-place White Sox. He never came close to matching his one spectacular game, and by 1924 a chronic sore arm spelled the eventual end of his career. He struggled for several years, bouncing from the majors to the minors, and after losing 19 games for Milwaukee in 1930, Robertson left the game and returned to his native Texas. He ended his major-league stay with 49 wins and 80 losses, easily one of the least impressive career logs of any perfect-game pitcher.

Thirty-four years went by before another major leaguer matched Robertson’s feat. When Don Larsen threw his perfect game in the 1956 World Series, fans naturally wondered whatever became of Charlie Robertson. A reporter for the New York Times located Robertson in Texas, where the ex-pitcher was self-employed as a pecan broker. Robertson, then 60, had long since left baseball behind. “My game didn’t make much of a lasting impression on me,” he said. “If I had known then what I know now it would never have happened to me. I wouldn’t have been in baseball. … There’s nothing wrong with professional athletics as such, you understand. But when they get through with an athlete he has to start over at an age when it’s the wrong time to be starting.”9