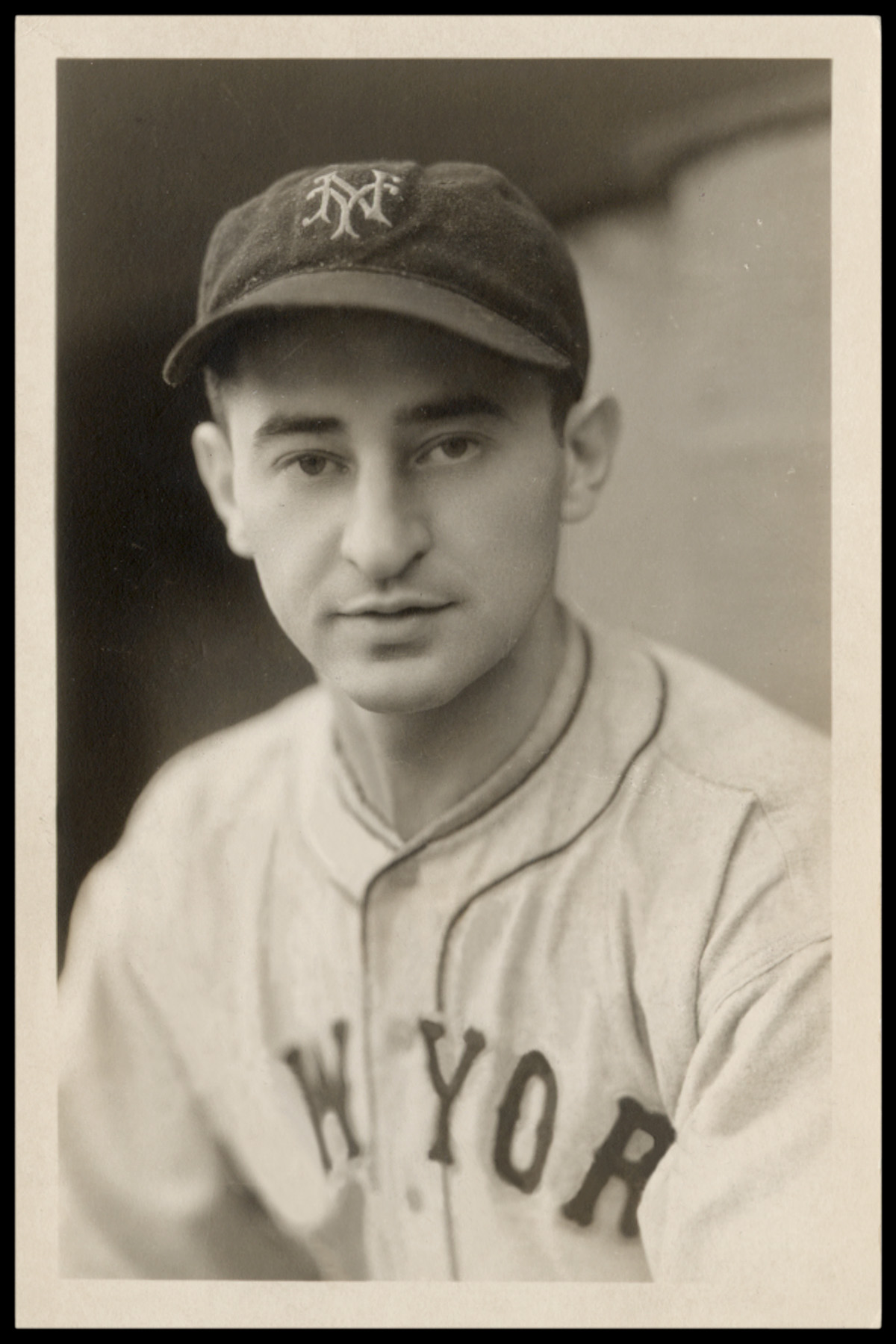 With D-Day still five weeks in the future, baseball was starting its third year of wartime play. The game on the field wasn’t what it had been back before Pearl Harbor—or even in 1942. But now it was April again, the grass was green, maybe the end of the war could be in sight, and on this “lovely”1 Sunday, 58,068 fans “stormed”2 the Polo Grounds in Upper Manhattan for a doubleheader in the hot cross-city rivalry between the Brooklyn Dodgers and New York Giants.

The teams had already met four times that season, with the Giants winning three close ones; the Dodgers had gotten one back with Curt Davis’s pitching and Dixie Walker’s hitting in a 5-0 win the day before. The first Sunday game featured a mound matchup of six-foot-five North Carolinians: playing manager Mel Ott was sending former rookie phenom Cliff Melton3, a lefty, to the slab as Leo Durocher countered with Cliff’s righty cousin Reuben, predictably known across baseball as “Rube.” Cliff, a career-long Giant in his eighth and what would prove to be his last major league season, was 32. Cousin Rube, 27, had broken in with and pitched two years for the Phillies and was in his second year with Brooklyn. He was a late replacement that day for Whitlow Wyatt, the Dodgers’ fading ace, who was “still troubled by [a] troublesome catch in his shoulder muscle.”4

Military ineligibility had become a significant baseball factor as the war years ground on. The Giants’ 36-year old Phil Weintraub debuted with the club as an outfielder in 1933 and then bounced around the NL and minors as a first baseman and even retired briefly from baseball after the 1940 season5 before resurfacing in New York in 1944. He’d hit well in the minors the year before, prompting the Giants to pick him up in the offseason draft. In late March, Weintraub, tabbed by Ott as “the best-looking player in camp”6 had been classified 4-F with a “loose substance in his crooked left arm commonly called chipped bones or ‘acorns.’”7 This was a relief to the Giants—they’d essentially handed the 1944 first base job to Weintraub after the loss of everybody who’d manned the position in 1943 except Joe Medwick, acquired mid-season and primarily an outfielder, and Nap Reyes, a fill-in at best.

Twenty-three-year-old Clancy Smyres, rejected from service due to a kidney operation, was over in the Brooklyn dugout. He’d been signed in 1941 by the Yankees and played briefly in Class C before popping up as a Dodger infield prospect after two years away from baseball. Things were so dire that the local press called him “a possible starter at second base.”8 But Smyres had a chronic sore arm that resulted in club president Branch Rickey’s sending him to experts at Johns Hopkins Hospital in Baltimore for evaluation. Still, Rickey had hope: “If he could throw, there isn’t a better shortstop on the squad., he told the Brooklyn Daily Eagle.”9 The Sporting News chimed in: “He is a switch hitter with a sock from either side, but has not been able to show much in the infield because of a sore arm.”10 It being 1944, Smyres and his sore arm made the roster out of camp but, when the Dodgers opened in Philadelphia on April 18, Durocher started Luis Olmo at second base and Gene Mauch, scheduled for military induction in June, at shortstop.

Twelve days later at the Polo Grounds, Olmo was still at second, Bill Hart was the Brooklyn shortstop, Weintraub was at first base for the Giants, and Smyres still sat. As a preview of the “giddy goings-on”11 to follow, Cliff Melton’s error covering first base allowed Dodger leadoff hitter Frenchy Bordagaray to reach. After Walker singled, Melton got Olmo on a pop fly but Augie Galan singled to score Bordagaray. Melton then uncorked a wild pitch, scoring Walker, before Howie Schultz and Hart made outs to end the half-inning with Brooklyn up 2-0.

Rube Melton quickly disposed of Johnny Rucker and George Hausmann but walked Ott, and then Medwick. He greeted Weintraub with a wild pitch before getting one close enough to the plate for Weintraub to tag for a two-run double. Another walk, to Ernie Lombardi, followed; Hal Luby then singled Weintraub home. Rube got out of the inning by striking out the eighth man up, Buddy Kerr, but the third strike was errant enough that catcher Bobby Bragan had to throw Kerr out at first base. Giants 3, Dodgers 2.

Cliff Melton breezed through the second inning, yielding only a one-out double to Mickey Owen. With Owen on second, Durocher had already seen enough of cousin Rube and pinch-hit with Wyatt, who grounded out.

Les Webber came on for Brooklyn and struck out Cliff Melton to open the second. That was the only out he got, though, as the Giants merry-go-rounded him and Chink Zachary for another four runs on a lone hit followed by six consecutive walks12. Fritz Ostermueller came on with the bases loaded and got the last two outs—the last one on a fly ball by Melton, batting for the second time in the inning. Cliff then retired the Dodgers in order in the top of the third to preserve the 7-2 lead.

Just getting started, the Giants added another four runs off Ostermueller in their half of the third. Weintraub’s three-run triple was the big blow; he’d now driven in six runs.

But staked to four more runs as he came out for the fourth, Cliff Melton couldn’t hold an 11-2 lead. As the Dodgers rallied, Durocher pinch-hit Smyres for Ostermueller. He lifted a foul pop to Weintraub, the first out of the inning and the last one Melton got before giving way to Harry Feldman.13 Melton surrendered five runs in the inning, the last two unearned on Olmo’s single off Feldman. Giants 11, Dodgers 7.

The Giants came right back against Durocher’s fifth pitcher, Tommy Warren, to match those runs in the fourth and were in the process of adding more two innings later. At that juncture Durocher, “for a reason clear to no one, chose to pick a row in the sixth with all three of the umpires, who simultaneously and with considerable enthusiasm, waved him off the premises”14 to a predictable chorus of boos that escalated when he “deliberately stirred up the crowd by dilatory tactics before he left.”15

Meanwhile, Weintraub had continued his onslaught with a two-run double in the fourth. He added a three-run home run off Warren and two runs scored in the eighth. Even pitcher Feldman was involved with an RBI double as Ott’s club plated eight in the eighth and ran away, 26-8.

Although Rube Melton was the losing pitcher, Warren’s “take one for team” slate on the day was ugly: 5 IP, 13 H, 15 R (11 ER), 6 BB.16 Feldman had hung on in relief of Cliff Melton and got the win when Bragan rolled into a double play. And there was another game to play.17

Surprisingly, the game set only one new NL and major-league record: the Giants’ 26 runs driven in. Weintraub’s 11 RBIs fell one short of Jim Bottomley’s National League record established 20 years earlier.18 Mel Ott tied his own NL record with his five walks19 and six runs scored, and he reached the 1,700 mark in both career runs and RBIs in the game.20 The six consecutive walks by Dodger pitchers in the second inning tied similar frustration by the 1909 Giants and 1928 Phillies.21

Weintraub finished a solid 1944 season at .316, with 77 RBIs, came back for reduced playing time with the Giants and another stint in the minors in 1945, and was released in January 1946. Smyres was optioned to the Dodgers’ Newport News farm club on May 422 and never appeared in another major league game. He was out of baseball at age 24 after 82 games in Class A in 1945.

Neither the Giants nor the Dodgers accomplished much in 1944. They finished fifth and seventh, respectively, in the National League, a combined 80 games behind the Cardinals, who went on to beat the Browns in that year’s “St. Louis Showdown” World Series.

Thanks to my SABR Games Project colleague Greg Erion for accessing and providing copies of the New York Times articles cited in the Sources.

12 Weintraub worked one of the bases-loaded walks, giving him his third RBI.

13 This was the second and last at-bat of Smyres’ major league career. He’d first batted as a pinch-hitter in the eighth inning at Philadelphia on Opening Day and popped out to first. The next day, April 19, he came on as a 10th inning pinch-runner, scored the lead and ultimately winning run on a single by 41-year old Paul Waner, and played third base in the bottom of the inning without a defensive chance.

16 Warren, 26, the ultimate long reliever this day, also typified wartime baseball. The 1944 season was his only one in the majors. He appeared in 22 games with four starts. The highlight of his career was probably three months later, in the first game of a doubleheader on July 30 at Ebbets Field, when he held the first-place and later pennant-winning Cardinals to 8 hits in a complete game the Dodgers won 10-4. But it was wartime—in the second game Durocher summoned Warren in the 9th inning with Brooklyn trailing by a run. Although Dixie Walker hit a home run in the bottom of the inning to tie the game and Warren successfully navigated the 10th inning, he yielded two runs in the 11th to take the loss and go 1-1 for the day.

17 The plucky Dodgers rebounded to win, 5-4, in a game shortened to seven innings by darkness. The first game had consumed two hours and fifty-eight minutes, an eternity for games of the era.

18 Mark Whiten of the Cardinals drove in 12 runs on September 7, 1993, to tie Bottomley. Baseball-Almanac.com.

19 Ott walked each of his first five times up, then added an RBI single in the eighth. Drebinger.