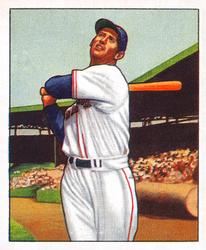 The 1950 season still stands out in Red Sox history as the season in which they scored more runs than any other – in the 154-game season, they scored 1,027 runs. Another Boston team – the 1894 National League Boston Beaneaters – still holds the major-league record, with 1,220 runs scored. The 1931 New York Yankees scored 1,067 runs, earning the American League record.

The 1950 Red Sox, however, hold the AL record for the most runs scored in a season during home games – 625. Fenway Park was clearly the place they most loved to play in that year.1 The season started with an Opening Day loss to the ultimate pennant-winning New York Yankees, who scored 15 runs. The Red Sox, in defeat, nonetheless scored 10.2

On April 30 Boston hosted the Philadelphia Athletics for two. They’d split a doubleheader in Philadelphia one week earlier, the Red Sox losing the first but winning the second, 12-2, in a game called after just six innings.

With a 4-6 record through 10 games, the A’s had come to town. The Red Sox won on April 28, 4-1. The April 29 game was postponed because of rain. Manager Joe McCarthy had Joe Dobson start for the Red Sox on April 30. Dobson gave up a harmless single in the top of the first inning. Earle Mack managed the three games in Boston in place of his father, Connie Mack, who was laid up with digestive problems.3 He started Dick Fowler. It didn’t go well. Dom DiMaggiowalked and Johnny Pesky tripled. Ted Williams singled in Pesky and when Vern Stephens hit a two-run homer into the left-field screen,4 It was 4-0 after one.

After two outs in the bottom of the second, DiMaggio and Pesky both walked and Williams hit a three-run homer over the Red Sox bullpen in right field. It was 7-0.

Byrd never got anyone out in the bottom of the fourth, and his replacement, Joe Coleman, got only one man out. The inning started with Joe Dobson singling to left field. DiMaggio then drew another walk. Pesky singled to center, scoring Dobson. Ted Williams followed with another three-run homer. After Stephens walked, Bobby Doerr homered. It was 13-0. That was enough for Earle Mack, and that’s when Coleman was called in.

Al Zarilla welcomed the new reliever with a single to left field. Billy Goodman then singled to center field. So did Birdie Tebbetts, his single scoring Zarilla. Dobson sacrificed so both Goodman and Tebbetts could advance a base – and then DiMaggio doubled them both in. Pesky drew a walk. The only out Coleman recorded was one made intentionally, the sacrifice bunt. Mack waved in Bobby Shantz to face Ted Williams. A base on balls loaded the bases. Stephens hit the ball back to Shantz, who committed an error, two runs scoring. DiMaggio scored the 17th run of the game and Pesky scored the 18th. Bobby Doerr then grounded into a 4-6-3 double play and the inning was over.

In the fourth inning, the Red Sox reportedly set a major-league record by having each of the first nine batters score in order.5

Neither side scored in the fifth, sixth, or seventh – though the Athletics loaded the bases with nobody out in the top of the seventh. Dobson induced a flyout to shallow right field and then a 5-4-3 double play. His shutout remained intact.

In the bottom of the eighth, the Red Sox added a final punctuation point of sorts: one more run. DiMaggio doubled, took third on a groundout, and scored on an error by the shortstop.

Dobson set down the side in order 1-2-3 in the top of the ninth and had himself a five-hit, 19-0 shutout. The Red Sox had scored all their runs in eight innings. Dobson had walked two and struck out two. Two of the five hits belonged to Elmer Valo, the star of the game on offense for Philadelphia.

Everyone in the Red Sox lineup, including the pitcher, had at least one hit. It could be argued that Doerr was the goat of the Sox, given that he was 1-for-6 and had hit into that double play in the fourth, and made the last out of the sixth and the eighth. But any day a player hits a two-run homer isn’t too bad a day. Pesky, Williams, and Zarilla each had three hits. For Ted Williams, it was his first day back after three during which he was ill and in bed. Williams had seven RBIs (this was the season he had 83 RBIs by the All-Star break, only to break his arm in the game and fall three short of 100 by season’s end.) DiMaggio scored five runs in the game. Pesky scored four.

There was another game to play this Sunday afternoon. The first game, even with all the runs, had taken only 2:11 to play.

The Red Sox scored the first five runs in the second game, Doerr driving in the first two. Through the bottom of the fourth, they were leading in runs scored on the day, 24-0. But the Athletics scored three times off starter Chuck Stobbs in the top of the fifth and added another run in the seventh. Stobbs helped his own cause, driving in a sixth run and giving the Red Sox a 6-4 lead in the bottom of the seventh.

The Athletics again climbed within a run, scoring once in the eighth. When Stobbs gave up a single in the top of the ninth, McCarthy brought in Al Papai. He secured three outs and Boston eked out a 6-5 win. The only Red Sox regular not to have a hit in the second game was Stephens, who drew three walks. The game lasted nine minutes longer than the first game, requiring 2 hours and 20 minutes to complete.

The doubleheader sweep made in 14 wins in a row for the Red Sox over the Athletics at Fenway Park. They were now 7-6 through April. Fowler’s personal record against Boston dropped to 3-16. Both Fowler and Coleman were known to have been battling sore arms. Attendance was 34,697. “The customers loved the massacre,” wrote Hy Hurwitz in the Boston Globe, “but it was pitiful to watch a couple of one time good pitchers like Dick Fowler and Joe Coleman get walloped.”6

In addition to the sources cited in the Notes, the author also relied on both Retrosheet.org and Baseball-Reference.com.

1 The 1996 Colorado Rockies hold the major-league record for most runs scored in a season at home: 658.

2 The next day, the Red Sox scored 13 more runs, but they split that Patriots Day doubleheader with a 6-3 win and then suffered another Yankees onslaught,16-7.

3 Norman Macht, The Grand Old Man of Baseball: Connie Mack in His Final Years, 1932-1956 (Lincoln: University of Nebraska Press, 2015), 460. Connie Mack had spent two days in his Boston hotel room before returning by train to Philadelphia in advance of the team. Associated Press, “Connie Expected to Take Over Team Soon,” Boston Globe, May 1, 1950: 6.