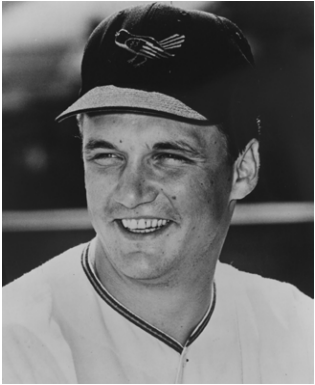 In late April of 1967, the Detroit Tigers traveled to Baltimore to play four games against the defending world champion Orioles at Memorial Stadium. The Orioles’ Dave McNally bested the Tigers’ Denny McLain in the first contest, 5-3. Detroit’s Mickey Lolich evened the score the following day by defeating Wally Bunker, 4-2. On April 30, 1967, the two teams wrapped up the series with a Sunday afternoon doubleheader. Orioles manager Hank Bauer gave the starting assignment to southpaw Steve Barber in the opener, while Tigers skipper Mayo Smith went with right-hander Earl Wilson.

Barber, making his third start of the season, had been battling tendonitis in his pitching elbow since late in the 1966 season. The Birds lefty retired the side in the first inning without giving up a hit, allowing only a walk to Tigers center fielder Mickey Stanley. This would be a common theme for Barber throughout the game.

Wilson, who entered the game with a 12-5 lifetime record against Baltimore, allowed just two singles, one to Andy Etchebarren and the other to Frank Robinson, in the first seven innings. On the Orioles’ side, Barber was even better, holding the Tigers hitless through eight frames. The downside was Detroit had a man on base every inning except the fifth via a walk, error or hit batsman.

The Birds finally got to Wilson in the bottom of the eighth. Curt Blefary started off with a base on balls. A sacrifice bunt from Woodie Held moved Blefary over to second. Wilson then intentionally walked Charlie Lau, who pinch-hit for Etchebarren to get to Barber. The Orioles pitcher worked Wilson for a free pass to load the bases. Luis Aparicio followed with a sacrifice fly to Tigers right fielder Al Kaline, Blefary scoring on the play. Kaline’s throw from the outfield got by catcher Bill Freehan allowing Lau and Barber to advance a base. With runners on second and third, Baltimore’s Russ Snyder flew out to first baseman Norm Cash to end the inning.

Barber, with his no-hitter still intact, was continuing to have difficulty throwing strikes, walking Cash and Ray Oyler to start off the ninth. Dick Tracewski was sent in to run for Cash while Jake Wood replaced Oyler on the bases. The next batter, Wilson, helped his own cause by executing a sacrifice bunt that advanced both runners.

Willie Horton, pinch-hitting for Dick McAuliffe, popped up to catcher Larry Haney, who had replaced Etchebarren, for the first out. With the count 1-2 on Mickey Stanley, Barber threw a changeup that bounced in the dirt past Haney. Tracewski came home from third on the errant toss with Wood moving over to third. Barber eventually walked Stanley, his 10th free pass of the afternoon, which drew manager Hank Bauer out of the Oriole dugout. When Bauer got to the mound he told Barber, “I tried to get it for you,” referring to the no-hitter. A frustrated Barber replied, “If you can’t get the ball over the plate you don’t deserve to win.”1 Barber received a rousing ovation from the 26,884 fans at Memorial Stadium as he walked off the field.

With the score tied at one apiece, Bauer brought in Stu Miller from the Orioles bullpen. The first batter he faced, Don Wert, smacked a ground ball up the middle that shortstop Luis Aparicio ranged far to his left and caught on the run. Aparicio then gave a backhanded toss to second baseman Mark Belanger, who had just entered the game as a defensive replacement, for the force out. The normally sure-handed Belanger’s bare hand got in the way of the throw causing the ball to drop out of his glove. The error allowed Wood to score the Tigers’ second run of the game. The next hitter, Al Kaline, hit a sharp grounder that caromed off third baseman Brooks Robinson’s glove. The ball took a fortuitous bounce into the waiting hands of Aparicio, who threw to Belanger covering second for final out of the inning.

Fred Gladding came in to pitch the ninth for Detroit. He retired Frank Robinson and Brooks Robinson on fly balls before striking out Mike Epstein to preserve the 2-1 Tigers win.

There seems to be at least one outstanding defensive gem in every no-hitter and in this game it was Barber who made the play. The Birds pitcher pounced off the mound and threw out Jim Northrup at first base after taking a hard shot off his leg from the Detroit left fielder in the second inning.

Speaking to reporters about coming out of the game without giving up a hit Barber remarked, “If I hadn’t been pitching a no-hitter I would have been out long before that. I was out of gas in the fifth inning. I’m not upset about losing the no-hitter. I’m more concerned about losing the game. No-hitters are not worth anything in the books unless you win.”3

Orioles right fielder Frank Robinson joked with Barber who was icing his sore elbow in the training room, “Next time give up a hit in the first inning, will you Steve? You make me feel like an old 31 standing out there through that.”4

Barber came close to pitching a no-hitter earlier in the season. In his first start of the year on April 16 he held the California Angels hitless for eight innings, allowing only three walks, until Jim Fregosi doubled with one out in the ninth. Summing up his pitching performance against the Tigers, Barber told Doug Brown of The Sporting News, “I was aiming at the middle all day, but I couldn’t hit it. I had no idea where I was throwing. I haven’t been so wild since I was a rookie in 1960. I can’t understand it. But I’m going to find out. I don’t think Hank [Orioles manager Hank Bauer] could stand this all season.”5

Barber and Stu Miller’s collaborative no-hit effort was the second time in baseball history that multiple pitchers had combined to lose a no-hitter. On May 26, 1956, the Reds’ Johnny Klippstein, Hershell Freeman, and Joe Black combined to hold the Milwaukee Braves hitless for nine innings. Black gave up a double with two outs in the 10th before serving up the game-winner in the 11th inning, losing 2-1. Prior to 1967, the other major-league pitcher to lose a no-hitter in a nine-inning game was the Astros’ Ken Johnson who lost to the Cincinnati Reds 1-0 on April 23, 1964.