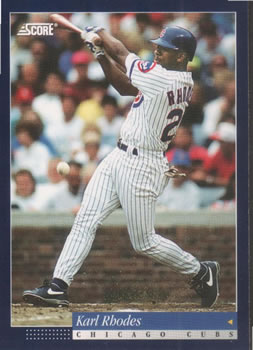 Opening Day — the day when every team is tied for first place at the beginning of play and a day of eternal hope — the hope that this year will be the year! Opening Day in Chicago has always been special. When the Cubs play their first game at Wrigley Field it doesn’t matter how good the team is or what the expectations are, it is exciting and there is electricity in the air.

Monday, April 4, was Opening Day at Wrigley Field in 1994. The game pitted a pair of teams from which relatively little was expected of during the 1994 season. Chicago fans were hoping their lovable Cubbies would build on their 84-78 fourth-place (NL East) 1993 finish. Meanwhile the Mets were looking to reverse a three-year downward spiral that culminated in a dismal 103-loss 1993 season.

A standing-room crowd of 38,413 jammed sun-drenched Wrigley Field. The game-time temperature was 53 degrees, seasonal for early April in Chicago, and true to the city’s moniker (The Windy City), the wind was blowing out to left field at 22 mph. The blustery weather would be a factor in the game.

Journeyman Mike Morgan was given the honor of starting the opener for the Cubs. Morgan, who was coming off a 10-15 season with a 4.03 ERA, was making his second consecutive Opening Day start for the Cubs. He was opposed by Mets right-hander Dwight “Doc” Gooden. Gooden, 5-1 in previous Opening Day starts, was making the eighth and final such start of his career. The day, however, would belong to the relatively unknown center fielder Karl “Tuffy” Rhodes, who was batting leadoff for the Cubs.

Rhodes was drafted in the third round of the 1986 amateur draft by the Houston Astros after a standout career at Western Hills High School in Cincinnati. Rhodes rose through the low levels of the minors at a very young age, showing precocious plate discipline but very little power.1 In the minors he was known more for his basestealing. Before 1993 he never hit more than four home runs in a season. While he began to display some power at the Triple-A level in 1993, his acquisition by the Cubs that year drew little attention. Rhodes entered the 1994 season with only five major-league home runs over parts of four seasons, and there was nothing to suggest he would enjoy the type of day he did on this April afternoon.

Morgan delivered the first pitch at 1:22 P.M. and the Cubs’ and Mets’ 1994 seasons were underway. After issuing a leadoff walk to second baseman Jose Vizcaino and giving up a one-out single to Kevin McReynolds, the Cubs right-hander navigated his way out of trouble to keep the Mets off the scoreboard in the first.

The fireworks started early in the Cubs half of the first. Rhodes, playing center field and leading off, deposited a 3-and-2 offering from Gooden into the deep reaches of the corner of the bleachers in left-center. Future Hall of Famer Ryne Sandberg followed with a single to right before Mark Grace grounded into a 6-4-3 double play and Gooden retired Derrick May on a comebacker to the mound. Both hurlers retired the side in order in the second.

The top of the third was highlighted by back-to-back home runs by the Mets’ Vizcaino and catcher Todd Hundley. Although the wind was blowing out to left, both were able to reach the right-field bleachers. Entering the bottom of the third, the Cubs trailed 2-1. Gooden retired Shawon Dunston and Morgan, bringing Rhodes to the plate with two outs. Rhodes launched a 3-and-1 fastball into the breeze blowing out to left and tied the game with a home run that landed deep in the left-field bleachers.

The Mets answered with a big fourth inning. Second baseman Jeff Kent led off with the team’s third home run of the game, to deep left-center off Morgan. Three batters later, center fielder Ryan Thompson hit a two-run double to left, was sacrificed to third by Gooden, and scored on Vizcaino’s sacrifice fly.

The Cubs answered with three of their own in the bottom of the fourth. Grace was safe at first on an infield single and scored on Derrick May’s double to center. Later in the inning Dunston drove in a pair of unearned runs with a double to left-center to draw the Cubs to within 6-5.

Thirty-year-old left-hander Blaise Ilsley2 came on in relief of Morgan, who was lifted for a pinch-hitter in the bottom of the fourth. Ilsley fared no better than his predecessor. The Mets sent up eight batters and scored three runs, capped by Gooden’s two-run single to right, to extend the Mets’ lead to four at 9-5.

Rhodes came to the plate for the third time in the bottom of the fifth. This time he got hold of a 1-and-0 fastball from Gooden and drilled it to deep left-center for his third no-doubt-about-it home run of the game. The blast sent the Wrigley faithful into a frenzy and left Gooden with a perplexed look on his face. Tuffy Rhodes had taken Doc Gooden deep three times and earned a standing ovation and curtain call. All this and the first game of the season was only half over!

The Cubs manufactured another run in the fifth with a Sandberg double and a pair of groundouts. After five innings their deficit stood at 9-7. The Mets extended their lead to three in the top of the sixth with when Kent drove in Hundley with a single to deep short.

The Cubs started the bottom half of the sixth with singles by Rick Wilkins and Steve Buechele. After Gooden retired Dunston (fly ball to center) and struck out Glenallen Hill, the man of the hour came to plate once again. Sensing that perhaps Rhodes simply had Gooden’s number that day, Mets skipper Dallas Green made a call to the bullpen and brought in left-hander Eric Hillman to face Rhodes. Pitching to Rhodes very carefully, Hillman walked him on four pitches to load the bases before he retired Sandberg on a line drive to deep left.

The score remained 10-7 in favor of the Mets as both teams failed to score in the seventh. The Mets added a run in the top of the eighth on David Segui’s sacrifice fly that scored Bobby Bonilla, and another in the top of the ninth when McReynolds drove in Vizcaino with an infield single.

Trailing by five, the Cubs were down to their last three outs when Rhodes came to the plate to face Mets left-handed closer John Franco. Rhodes singled to right and extended his perfect day at the plate. His day ended when he was forced at second and the Cubs managed only a single run. Despite the team’s 12-8 setback, Rhodes’ unlikely 4-for-4 performance was nothing short of trilling and for one glorious day he was on pace to hit 486 homers in a 162-game season.

After his three-homer start to 1994, Rhodes played pretty well through May, but slumped in the summer and saw his playing time dry up by July. His home-run total for the season was 8. Just over 14 months after his improbable Opening Day home-run binge, Rhodes played his final major-league game, in a brief stint with the Boston Red Sox. However, Rhodes had plenty of baseball ahead of him. After the 1995 season he signed with the Osaka Kintetsu Buffalos of Japan’s Pacific League. There, Rhodes became one of the greatest foreign-born sluggers in Japanese baseball history. In 13 seasons in Japan he slugged 464 home runs, including 55 in 2001 which tied Sadaharu Oh’s single-season home run record.3 His 55th came off future major leaguer Daisuke Matsuzaka.4

For baseball, 1994 was a season to forget. The players strike end the season on August 10, and fans were victimized by having the postseason and World Series taken from them. The Cubs finished a distant fifth in the NL Central, 16½ games behind the Cincinnati Reds, and the Mets finished third, 18½ games behind the baseball-best Montreal Expos.

In addition to the sources cited in the Notes, the author also consulted SABR.org, Retrosheet.org, and Baseball-reference.com.

2 Ilsley made the Cubs roster out of spring training but was optioned to Triple-A Iowa after struggling in 10 appearances with the Cubs. In 14 professional seasons he finished with a 113-73 record.

3 Michael A. Lev, "Samurai Slugger: Former Cub Tuffy Rhodes, a home run king in Japan, accepts that he always will be viewed as hired help in that nation," Chicago Tribune, July 11. 2004.