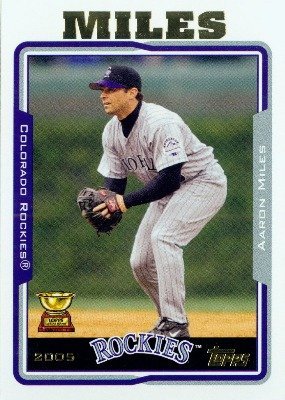 Baseball can be the most agonizing of games because blame is so clear and individual failures are so carefully quantified. Yet for those players with tough minds and resilient talents, it is also among the most forgiving fields of endeavor.1

The 2005 Opening Day matchup between the San Diego Padres and Colorado Rockies stands as a clear reminder of the dichotomy of quantifiable failures of and the need for a determined, unrelenting resilience. The game itself was a microcosm of a baseball season, complete with the ebbs and flows marked by disappointments and triumphs that characterize the American pastime. Right down to the last at bat.

The Padres were coming off an 87-75 season in 2004, good for third place in the NL West, six games behind the division champion Los Angeles Dodgers. The Padres entered the new season optimistic that they could improve upon their previous year’s finish. The Rockies finished 2004 with a record of 68-94, 25 games off the pace. While little was expected of the club in 2005, there was a newfound enthusiasm that accompanied the club’s youth movement. The Rockies’ Opening Day lineup included three rookies.

Woody Williams was the Opening Day pitcher for the Padres. The 38-year-old right-hander signed a two-year, $8 million contract during the offseason to return to San Diego after a successful 3½-year stint with the St. Louis Cardinals in which he compiled a 45-22 record. The Padres were hoping the veteran’s presence would be enough to put them over the top. Left-hander Joe Kennedy was given the Opening Day start for the Rockies. Kennedy was coming off the best year of his career (9-7 with a 3.66 ERA) in 2004. Both pitchers were making their second Opening Day start. Williams started and lost the Padres opener in 2001 against the San Francisco Giants and Kennedy earned a no-decision as the Opening Day pitcher for the Tampa Bay Devil Rays in 2003.

Kennedy delivered the first pitch just after 2:00 P.M. The game was played under cloudy skies with a balmy game-time temperature of 68 degrees and barely the hint of a breeze blowing out to center field. The southpaw hurler struck out Khalil Greene and Mark Loretta to start the game before loading the bases. He walked Brian Giles, yielded a single to Phil Nevin,and walked Ryan Klesko before escaping by getting Padres catcher Ramon Hernandez to pop out to second.

Williams’s second stint with the Padres got off to a tough start. Second baseman Aaron Miles led off the home half of the first with a double to right. He immediately came around score when rookie Clint Barmes doubled to center. Todd Helton followed with a walk and Preston Wilson smacked a three-run home run. Four batters in and the Rookies were up 4-0! Following a Matt Holliday single, Williams settled down and retired the next three Rockies to avoid an even more catastrophic start to the season.

Both pitchers had uneventful second innings before the Padres answered in the top of the third. Loretta started the inning by beating out a groundball to short and Giles cut the Rockies’ lead in half with a line-drive, two-run homer. On the very next pitch, Nevin hit a solo shot to right-center. Just like that, the Padres were back in the game, trailing only 4-3.

It didn’t take long for the Rockies to respond in the bottom of the frame. Holliday reached on a one-out single to center and scored when third baseman Jeff Baker, who was making his major-league debut, recorded his first major-league hit, a two-run homer that increased the Rockies’ lead to 6-3. Kennedy followed by striking out the side on the top of the fourth before the Rockies mounted another threat in the bottom of the inning. After retiring Kennedy on a groundball to short, Williams yielded singles to Miles and Barmes before being lifted by manager Bruce Bochy in favor of left-handed journeyman Dennys Reyes.2 Despite balking the runners to second and third, Reyes was able to escape further damage when he struck out Helton and retired Wilson on a foul pop to first base. It was not the return that Williams or the Padres had hoped for. In 3⅓ innings, he yielded nine hits and six runs, all earned.

Again, Kennedy retired the Padres in order in the top of the fifth before the Rockies added a run in the bottom of the inning. Holliday led off with a triple to deep left-center and scored when right fielder Dustan Mohr singled to left. With the Rockies now leading 7-3, it appeared they were on their way to an easy Opening Day victory. However, as demonstrated by the ballpark’s first decade of operation, no lead is ever safe at hitter-friendly Coors Field.

Klesko, the Padres’ left-handed-hitting left fielder, led off the top of the sixth with a line single to center. Hernandez followed with a walk before Xavier Nady drilled a three-run homer to cut the Rockies’ lead to 7-6 and send Kennedy to the showers. Left-hander Javier Lopez was summoned from the bullpen and promptly gave up a single to Sean Burroughs. Burroughs was forced at second on Eric Young’s grounder. Young stole second and scored when Greene doubled to right field. The Rockies called upon right-hander Allan Simpson to extinguish the flames, but he was immediately greeted by Loretta’s single to right that advanced Greene to third. Next up was Giles, who plated the Padres’ fifth run of the inning with a fly to center that scored the Padres’ shortstop. The inning came to a merciful end when Simpson retired Nevin on a groundball that ricocheted off him to short. However, the damage was done. The Padres had batted around and taken an 8-7 lead.

The Rockies quickly countered in the bottom of the sixth. Miles collected his fourth hit and third double of the game when he shot a groundball down the right-field line off right-handed reliever Rudy Seanez. The Rockies second baseman advanced to third when Barmes grounded out to the right side of the infield and he scored when Helton singled to center. After six eventful innings the game was tied at 8 runs apiece.

Right-hander Scott Dohmann came on in relief for the Rockies in the seventh. After Klesko struck out to start the inning, Hernandez homered to right center to put the Padres back in front. Two pitches later, Nady followed with his second homer of the game to put the Padres up 10-8.

Things calmed down a bit during the next inning and a half. Unheralded right-hander Scott Linebrink, who had a career year in 2005, pitched a scoreless seventh for the Padres, as did Rockies left-hander Brian Fuentes. Akinori Otsuka, the Padres’ setup man, took the ball in the eighth and was able to navigate around a one-out single and two-out walk to hold the two-run lead.

The Padres loaded the bases in the top of the ninth but failed to add insurance runs. Hernandez reached on an error to lead off the inning and stole second with one out. Burroughs walked, and Rockies manager Clint Hurdle called upon right-hander Ryan Speier to face Adam Hyzdu, who had replaced Klesko in left. The right-handed-hitting Hyzdu popped out to second. Greene followed with a walk to load the bases, but the threat died when Loretta grounded into an inning-ending fielder’s choice.

Down by two entering the bottom of the ninth, the Rockies had the unenviable task of facing the Padres’ Trevor Hoffman. The All-Star closer entered the campaign with 393 saves3 to his credit. After Mohr started the inning by flying out to left, Hoffman appeared well on his way to recording his first save of the 2005 season. But this group of Rockies had no quit.

Baker started the rally with a double to left, bringing the tying run the plate in catcher JD Closser. The rookie backstop grounded out to second, advancing Mohr to third. Hoffman was still working with a two-run lead when Cory Sullivan, who was also making his major-league debut, sliced a run-scoring double into the left-field corner. The switch-hitting Miles, batting left-handed, then tied it, 10-10, with his career-high fifth hit of the game, a run-scoring single up the middle.4 Barmes followed with the climactic blow, a two-run homer to left that gave the Rockies a 12-10 victoryand sent the near-capacity crowd of 47,661 into a frenzy.

What made the Rockies’ comeback so surprising, if not improbable, was that most of the damage was done by youngsters. Three of the four hits Hoffman allowed — two doubles and Barmes’ first-pitch, walk-off homer — were the work of their resilient rookies.5

2 Reyes was appearing with his eighth club in nine seasons.

4 John Marshall, What an Opening …,” Summit Daily(Summit County, Colorado), May 5, 2005. Retrieved from summitdaily.com/news/sports/what-an-opening-day/.