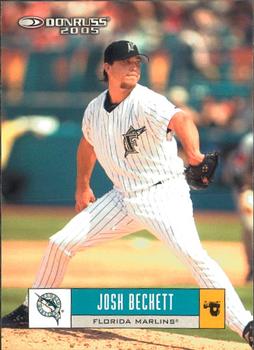 Going into 2005, the Florida Marlins began with high expectations, both internally and in the national media. Team President David Samson boldly predicted a franchise-record 93 wins, and one national magazine pegged the Marlins to win the World Series.1 Optimism was not unwarranted, as the core of the 2003 World Series champion Marlins team remained mostly intact and in their prime. A talent-filled pitching staff led by young stars Josh Beckett and Dontrelle Willis2 was supplemented by a battle-tested veteran, Al Leiter. A deep and fearsome lineup built around a “veteran” 22-year-old superstar, Miguel Cabrera,3 had added clout with the offseason addition of slugging left-handed power hitter and first baseman Carlos Delgado on a a four-year, $52 million contract.4 Marlins owner Jeffrey Loria had invested $67 million in his 2005 roster and as Opening Day approached, he and the rest of the league were expecting the Marlins to have a deep run into October.

Despite a rough spring in which the team went 11-21, an excited Opening Day crowd of 57,405 fans greeted the Marlins. It was the largest Opening Day attendance to date for the 12-year-old Marlins. The Atlanta Braves, the mainstays atop the National League East for 13 of the past 14 seasons, were facing the Marlins.5 The Braves had won the 2004 NL East Division championship and were entering 2005 with significant change in their starting rotation, led by the signing of ace Tim Hudson in free agency from Oakland. The most significant change in the pitching staff, however, featured 38-year-old John Smoltz returning to the starting rotation after three dominant years as the team’s closer. Smoltz took the mound on April 5 aiming to lead the Braves to their first Opening Day win since 2002.

Miami Dolphins legend Dan Marino began the day with a ceremonial first pitch, followed by 25-year-old Josh Beckett taking the mound for the Marlins. Beckett, making his third consecutive Opening Day start for the Marlins, walked Rafael Furcal and Marcus Giles to open the game. Much to the relief of the record crowd, Beckett settled down and retired the middle of the Braves lineup in order and escaped the inning unharmed. Smoltz was making his first start since 2001, and in the bottom of the first he retired leadoff hitter Juan Pierre before running into trouble by walking Luis Castillo and giving up a single to Miguel Cabrera, setting up a showdown with the $52 million man, Carlos Delgado. After receiving the largest contract in franchise history based on average annual value, Delgado had the opportunity to make an instant impression on his new fan base.6 It was not to be, as Delgado struck out on three straight split-finger fastballs,7 giving Smoltz the opportunity to escape the first inning in the same manner as Beckett as long as he could retire Mike Lowell. Stepping up to the plate with two on and two out, Lowell battled Smoltz in a 10-pitch at-bat that culminated in a single to left that drove in Castillo with the game’s first run. Catcher Paul Lo Duca continued the inning with a single to left, loading the bases for right fielder Juan Encarnación. Encarnación was one of the Marlins who had struggled throughout the spring, with only four extra-base hits in 69 at-bats.8 On a 1-and-0 count, Encarnación turned on a fastball and drove it over the left-center-field scoreboard, becoming the second Marlin to hit a grand slam on Opening Day, joining Preston Wilson, who hit one in 2002.

The return to the starting rotation did not get much better for Smoltz in the second inning. He walked Beckett to open the inning, then got consecutive fielder’s choice groundouts by Pierre and Castillo. As in the previous inning, Smoltz had an opportunity with two outs to get out of the inning. Facing Miguel Cabrera, Smoltz got ahead in the count 0-and-2, but could not put him away; Cabrera singled to left to extend the inning for the Marlins. Up to the plate stepped Delgado, who was looking to avenge his disappointing first at-bat in which, he admitted, he was “a little antsy.”9 Following a passed ball that put runners on second and third, Delgado singled to right field, driving in both runners. The hit knocked Smoltz out of the game; he was tagged for seven runs, six of them earned, in less than two innings.

Beckett also labored, needing 70 pitches to get through the first three innings. This did not surprise Beckett, who said after the game, “I didn’t think I was going to have it because I didn’t have it [warming up] before the game.”10 After he got out of the third, Beckett settled in and finished strong, retiring the next nine Braves hitters, punctuating his strong performance by striking out Andruw Jones on three pitches to end his day. Beckett went six innings, giving up only two hits, striking out six, and walking three to record his first-ever Opening Day win. A trio of Marlins relievers followed Beckett and closed out the 9-0 shutout to kick off the 2005 season in strong fashion for the Marlins.

By the time Marlins reliever Guillermo Mota induced Eddie Perez to ground into a 6-4-3 double play to wrap up the shutout, the Marlins lineup had shown just how dominant they could be, led by a four-hit game (plus three RBIs) by newcomer Delgado. Cabrera, hitting in front of him, had two hits, and Lowell, hitting behind Delgado, also had two hits and two RBIs. Combining stellar pitching and a lethal lineup, the Marlins looked poised to challenge for the National League East, but as Smoltz told reporters about the Marlins after the game, “Obviously they’ll be a threat, but winning it 13 straight years we’re always going to be the team to beat.”11

As the season unfolded, Smoltz’s statement would prove to be true. Led by Smoltz and his 3.06 ERA over 229⅔ innings, the Braves won their 14th straight NL East title before being eliminated by the Houston Astros in the first round of the playoffs. And despite the picture-perfect Opening Day, the rest of the season did not go well for the Marlins. They never led the division after June 3, finishing the season with a record of 83-79, seven games behind the Braves, six games out of the wild-card hunt, and far below preseason expectations.

After the 2005 season, Marlins manager Jack McKeon would retire at the age of 74. Owner Loria, who on Opening Day was being told by fans that he should run for president,12 blew up his $67 million roster in a manner that forever soured his relationship with fans in South Florida. In November, the Marlins traded Delgado to the New York Mets after just one season,13 and hours later dealt Beckett, Lowell, and Mota to the Red Sox.14 The Marlins received Mike Jacobs and two prospects from the Mets, while receiving top prospects Hanley Ramirez and Anibal Sanchez from the Red Sox.15 By the time the first pitch was thrown in 2006, the Marlins had slashed their payroll by $45 million, opening the season with the lowest payroll in the league at just under $15 million. A crowd of only 31,308, greeted the team on Opening Day 2006. The only core pieces that remained from the 2005 team were Dontrelle Willis and Miguel Cabrera, both of whom would be traded after the 2007 season.

Although the Marlins’ 2005 season will be remembered as an “83-win embarrassment,”16 the team lived up to the hype on Opening Day with a resounding 9-0 shutout victory.

In addition to the sources cited in the Notes, the authors consulted Baseball-Reference.com.

2 Willis would have the best year of his career in 2005, compiling a 22-10 record, throwing five shutouts, and finishing second in the NL Cy Young Award voting.

5 The only season the Braves did not top the NL East was the season that was not played to its conclusion — the strike-shortened 1994 season.

15 The two trades worked out quite well for all three teams. Beckett and Lowell led the Red Sox to a World Series win in 2007, while Delgado anchored the middle of the Mets lineup to the NL East title and a trip to the NLCS in 2006. For the Marlins, Ramirez was an instant superstar, winning Rookie of the Year in 2006, making three All-Star Teams, and finishing in the Top 11 of the MVP race three times in his Marlins career. Jacobs was a solid middle-of-the order hitter, while Sanchez threw the Marlins’ fourth no-hitter in September 2006.