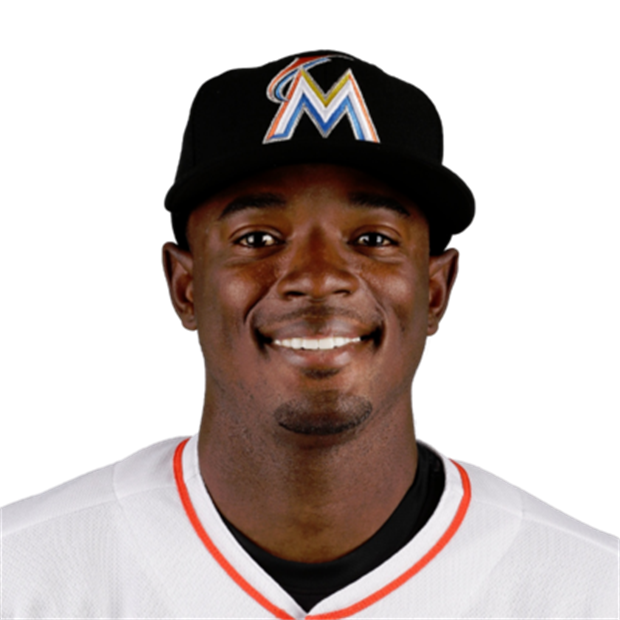 Dee Gordon slipped as he accelerated out of the batter’s box.

The speedy Miami Marlins’ second baseman had just laid down a bunt in an effort to spark a late-game rally. His team trailed the Atlanta Braves, 2-1, in the eighth inning on Opening Day of the 2015 major-league season.

Gordon, slowed by the slip, was thrown out at first by Atlanta pitcher Jim Johnson.

Earlier, a surprise rain shower drummed the ballpark and forced a brief delay in the second inning, leaving players and fans scurrying for cover as Marlins Park got a soaking.

It seems unlikely the area in front of home plate was still wet from the second-inning shower. However, the field crew was not prepared for such an event. There was no accessible tarp to cover the infield.

Why should there be? Marlins Park had a retractable roof.

Marlins Park opened in April 2012. It features a sophisticated retractable roof designed to protect fans and players from Miami’s sweltering summer heat and pesky thunderstorms that often barrel through the city.

An announced crowd of 36,969 fans packed the park on Opening Day, hoping to see the genesis of a winning season. It was 80 degrees at first pitch and mostly cloudy. Yet, the forecast — it called only for a 20 percent chance of rain — looked promising for a beautiful day of baseball.1

The Marlins kept the roof open.

All of this information was found on a weather app. 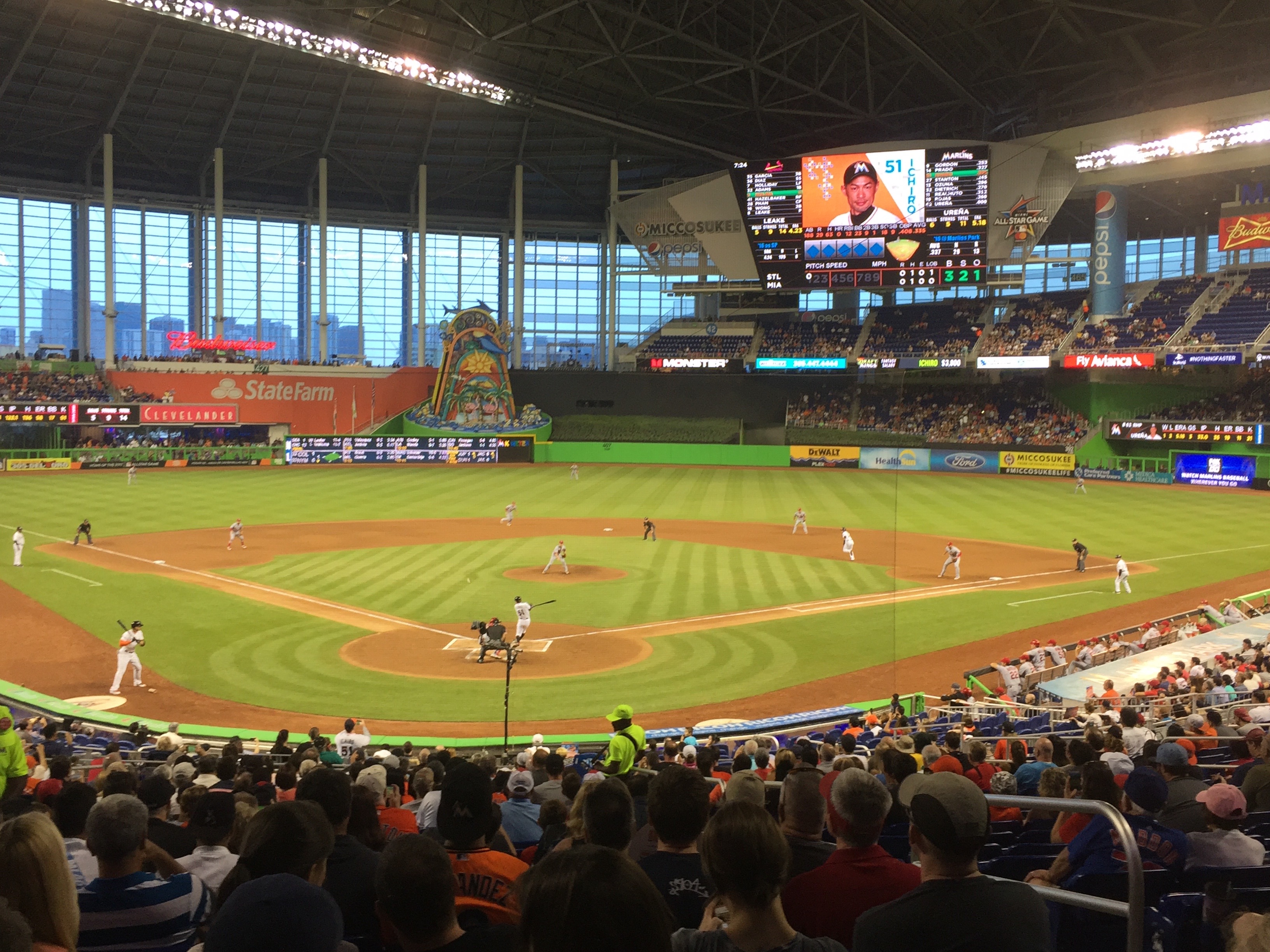 Ichiro Suzuki of the Miami Marlins bats during the SABR 46 convention game on Friday, July 29, 2016, at Marlins Park in Miami.

Six former Marlins All Stars — Luis Castillo, Jeff Conine, Alex Gonzalez, Charles Johnson, Mike Lowell, and Carl Pavano — threw out the ceremonial first pitch. Minutes later, at 4:22 P.M., Miami pitcher Henderson Alvarez ignited a cheer from the hometown crowd, those who arrived at the ballpark on time, when he got Atlanta’s Eric Young to ground to second for the first out of the new season.2

Jace Peterson then smacked the second pitch he saw from Alvarez to center field for a single. On his first pitch to Nick Markakis, Alvarez balked Peterson to second, moving him into scoring position.

Markakis, facing a 1-and-1 count, singled to center, scoring Peterson for a 1-0 Atlanta lead.

In the bottom half of the second inning, Atlanta starter Julio Teheran had a 1-and-1 count on the Marlins’ Martin Prado when spectators began to scramble as a dark, gray storm cloud above unleashed a steady rain onto the uncovered ballpark.

“It started raining and then raining harder, and I just remember thinking it’s not going to rain harder, but then it rained even harder,” Samson said. “And then I remember the umpires getting together and realizing that we were about to have a rain delay.”

The Marlins Park roof structure weighs 19 million pounds (9,500 tons) and closes in “between 11 and 15 minutes, depending on the wind,” Samson said, while traveling 39 feet per minute, according to the Marlins Park website.

“It was extremely surreal when I realized we were going to have a rain delay in a retractable-roof facility, and I was the one responsible,” Samson said. “And it was Opening Day. I knew that the roof was open, and I didn’t think the rain was coming.”

Samson, as was critically noted in many media reports, used weather apps on his phone to track a storm moving toward the Marlins Park vicinity. At the time, the team did not consult with meteorologists or weather services.

“I looked at three different weather apps, and I didn’t think we were going to be impacted and neither did the people around me,” he said in the phone interview. “And all of the sudden it started raining and then raining harder.”

Meteorologist John Morales said he is “not a big fan of weather apps,” particularly when used to make decisions that can have an impact on so many people. “Those apps gather information from computer models and generally have little to no influence from weather-predicting professionals,” Morales explained in a phone interview on January 18, 2017.

“That [forecast] is looking at the entire planet and having it retrieve this one bit of information as to what the weather might be, whether it be tomorrow or the next hour, for that specific point in Miami. And more often than not you’re going to be disappointed with what the app is going to give you,” Morales said.

And on picturesque days that appear perfect for baseball, “there might be some isolated showers out there which might clip the park,” Morales said. “And even though they’re isolated, covering 10 or 20 percent of the area, which is not a lot, but if it happened to be in that 10 to 20 percent, then you’re up the creek.”

As soon as Samson realized the game was going into a weather delay, he called team owner Jeffrey Loria. “And it was a horrific phone call to make. I was sitting up in a suite, and (Loria) was sitting next to the dugout … in the rain,” The former team president deadpanned.

Samson was accustomed to making those calls when the Marlins played in an open-air stadium.

“That was an everyday thing,” he recalled. “But in the new ballpark, it didn’t even occur to us — that was year four in the new ballpark — and it had just never ever occurred to either me or him that I would ever be making those calls again.”

When Samson dialed the phone to Loria on this day, he recalled the owner saying, ‘I thought we had a roof.’”

“I said ‘I’m sorry,’” Samson said, recalling the remainder of the brief conversation. “He hung up, and I hung up. And that was it.

“And I was very careful to avoid him for the next 24 to 48 hours,” Samson said, laughing.

Once the roof closed and the field was prepped, play resumed. Prado stepped back into the batter’s box and grounded out to the pitcher.

The Marlins pulled even in the bottom of the third when Gordon slapped a two-out single to left, scoring Alvarez, who had doubled on a line drive to deep left field. The Braves ended the inning, and further threats, when catcher Christian Bethancourt threw out Gordon attempting to steal second.

Miami again ran itself out of an inning in the fourth when Giancarlo Stanton, rounding second on a two-out single by Prado, noticed no Atlanta player was covering third. And off he went. Left fielder Kelly Johnson took note and fired the ball to Andrelton Simmons, who adroitly moved to catch the ball and tag out Stanton.

“They were late to cover, so it had to be the perfect throw,” Stanton said. “It was right on there, and he still grabbed it and dove. So that can’t happen.”3

Leading off the top of the sixth, Eric Young punched an Alvarez pitch up the middle and raced to second for a double. Peterson next placed a sacrifice bunt in front of the plate, and Young advanced to third. Continuing to play small ball, Markakis grounded to Gordon. The second baseman threw home in an attempt to nab Young, but the speedy runner beat the throw, giving the Braves a 2-1 advantage.

The Marlins roared back in their half of the seventh. Michael Morse led off with a single to right. Prado followed with another single, and then another came from center fielder Marcell Ozuna. Three batters into the half-inning, the bases were saturated with Marlins.

The situation led Braves manager Fredi Gonzalez to remove Teheran in favor of lefty Luis Avilan. It was a smart choice by the Atlanta skipper.

On a 1-and-1 count, Avilan forced catcher Jarrod Saltalamacchia to ground weakly to third. Alberto Callaspo picked up the grounder and threw home to force out Morse. Bethancourt, the Braves catcher, then threw to first to nab Saltalamacchia for the double play.

Miami still had two baserunners — Prado stood at third and Ozuna moved to second — but the Braves could breathe a bit easier now with two outs.

Complete relief came when Marlins shortstop Adeiny Hechavarria popped Avila’s 1-and-2 pitch into foul territory down the first-base line. Atlanta’s Freddie Freeman parked under the ball and made the catch for the third out.

The bottom of the seventh turned out to be the last gasp for the Marlins and their fans, who now sat in dryer, more comfortable seats.

Gordon’s attempt for a bunt single in the bottom of the eighth failed, partly because the speedster slipped on his first steps toward first base.

“We had some chances, had some opportunities,” Miami manager Mike Redmond said. “We just didn’t get that one big hit. But we ran into a couple of outs as well. But, that’s baseball. We’ll come back tomorrow and be ready to go.”4

In the ninth, Stanton struck out swinging. So did Morse. Atlanta closer Jason Grilli threw two strikes past Prado before the third baseman lined out to second to end the game, giving the Braves a 2-1 victory.

This essay is adapted from the author’s article about the same game in the Spring 2018 Baseball Research Journal.

In addition to sources cited in the Notes, the author used the Baseball-Reference.com and Retrosheet.org websites and telephone interviews with Miami Marlins former President Don Samson and meteorologist John Morals of NBC 6 South Florida.