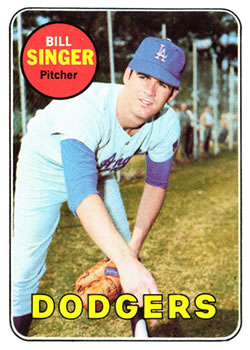 A sellout crowd of 30,111 watched their hometown Cincinnati Reds fall to the Los Angeles Dodgers by a score of 3–2 in the 1969 National League opener. This game “launched the second century of professional baseball in the city where the Cincinnati Red Stockings were organized in 1869.”1 Don Drysdale and Bill Singer of the Dodgers combined to defeat the Reds.

Cincinnati’s choice for starter, 20-year-old Gary Nolan, had a career record of 23-12 in his first two big league seasons (1967-68) with the Reds, pitching 12 complete games and seven shutouts. Cincinnati had high hopes for the youngster. The Dodgers countered with Drysdale who finished the 1968 campaign with an impressive 2.15 earned run average. He had earned the right to be the Opening Day starter, but it surely didn’t begin as expected. Cincinnati fans were treated to two first-inning back-to-back home runs by Pete Rose and Bobby Tolan. Before Drysdale could record an out, he was behind 2-0.

In the top of the second, Cincinnati’s Nolan quickly struck out both Ron Fairly and Andy Kosco before Tom Haller singled to center. Jim Lefebvre followed with double, plating Haller and cutting the lead in half. Ted Sizemore was making his Major League debut and he drew a walk before Nolan struck out Drysdale to end the inning. The Reds were retired 1-2-3 in the bottom of the second and then Nolan allowed back-to-back singles to Willie Crawford and Len Gabrielson to start the top half of the third inning. After Bill Sudakis struck out, Fairly shot a ball into right field and legged out a triple, driving in both runners. Nolan retired the next two batters, but Los Angeles had grabbed the lead, and there would be no more scoring in the game.

Drysdale settled into a routine, and although he gave up two more hits and two walks in the next four innings, he was aided by a timely double play in the bottom of the third inning and several pop fly outs in later frames. Nolan also pitched well. He did allow a few Dodgers on base with walks or singles, but he recorded at least one strike out in every inning (through seven) and twice struck out the side. No Los Angeles runner reached third base after the third inning.

In the bottom of the seventh, Dodgers manager Walter Alston called Singer into the game. After six innings of work, Drysdale had faced 23 batters and had departed with the lead. In his seventh inning debut, Singer retired Johnny Bench, Tommy Helms and Woody Woodward in order. Nolan had probably run out of gas, serving up two singles to Kosco and Haller to start the top of the eighth. Reds skipper Dave Bristol called to the bullpen for right-hander Wayne Granger2. Granger quickly retired the three batters he faced.3 Jim Merritt pitched the ninth for Cincinnati. He gave up a one-out double to Bill Russell (who was making his Major League debut as well), but he left him stranded.

Singer continued to pitch well, giving up a walk in the eighth but retiring the side in order in the ninth to preserve the win. In three innings of work, he faced ten batters and only allowed one walk. The first official save in the Major Leagues was a pretty good effort.

Jerome Holtzman, a sports writer for the Chicago Sun-Times, is credited with lobbying for the creation of the save statistic in 1959.4 Holtzman’s statistic and simple formula were adopted ten years later by baseball’s Official Rules Committee as the game’s first new official statistic since 1920, when the RBI (runs batted in) statistic was introduced. In that ten-season period and before the official start date of 1969, The Sporting News began calculating saves for relief pitchers, even if they were not “official.”

Under the 1969 rules, a relief pitcher earned a save under one of two conditions5:

As stated earlier, Singer pitched three complete innings. Since he entered the game with the score 3-2 in favor of his Dodgers, he fit both criteria listed above. Drysdale, the 1962 Cy Young Award winner, earned the victory, allowing only two runs, both earned, on four hits and two walks in six full innings of work. However, his first victory of the 1969 season needed Singer’s save. Drysdale would only appear in 12 games in 1969.

There was not a lot of offense in this first game of the season. Pete Rose went 2-for-3 with a walk as the Reds’ lead-off hitter, garnering half of Cincinnati’s four hits in the game which included his first home run of the season. Seven of the Los Angeles hitters picked up a hit, with Haller going 2-for-4 (both singles) with a run scored. Nolan struck out twelve batters in the loss, and Granger and Merritt each added a strike out in their inning of work.

Interestingly, although Singer earned Major League Baseball’s first save on Opening Day 1969, it was the only save of the season for the Dodger pitcher. It was also his only relief appearance of the season. In 40 other appearances for the 1969 Los Angeles Dodgers, he made 40 starts and had 16 complete games, pitching just over 315 innings.6

2 Wayne Granger and Bobby Tolan had been traded after the 1968 season from St. Louis to Cincinnati for outfielder Vada Pinson.

3 Granger was named 1969 National League Fireman of the Year by The Sporting News.

5 In both 1974 and 1975, the save rule was modified and the current rule has been in effect since the 1975 season. The current criteria can be found at http://baseball-reference.com/bullpen/Save.

6 Singer was credited with another save in 1975 while pitching for the California Angels, and he ended his 14-year Major League career with two official saves.