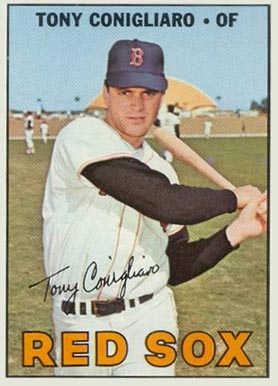 Greater Boston native son Tony Conigliaro was a star for the Boston Red Sox. He hit a home run over Fenway Park’s left-field wall on the first pitch he saw as a member of the Red Sox.1 He hit 24 homers in his 1964 rookie year, setting a major-league rookie record for the most home runs by a teenager. He set a number of other home-run records as well.2

The 1967 Impossible Dream Red Sox might well have gone all the way to win that year’s World Series, but they were without Tony C., struck in the head by a Jack Hamilton fastball in a game against the California Angels on August 18. It fortunately just missed his left temple but hit him in the eye and cheekbone. Two inches was the difference between likely death and life. As he lay on the ground, he said, he prayed, “God, please, please don’t let me die right here in the dirt at home plate at Fenway Park.”3

He later said, “I was never knocked out but I wish I had been. I rolled on the ground trying to stop the pain in my head with my hands. The impact of the ball made both my eyes slam shut and I felt a tremendous swelling in my mouth. I couldn’t see. I remember saying, I’m blind. I can’t see.”4 Indeed, the injury was so severe that he was administered the last rites.5

Conigliaro missed the rest of the 1967 season and all of 1968. There was concern that he might lose the sight in his left eye. An attempt to come back in spring training 1968 didn’t last long. There was a hole in his retina. He wasn’t able to play. His doctor told him, “It’s not safe for you to play ball anymore.”6

His retina unexpectedly began to heal. He persevered, doggedly, learning a new way to use his peripheral vision to see the ball. By 1969 he was not only ready to compete but joined the team for Opening Day, April 8. It was a Tuesday afternoon, 2:06 P.M. game at Memorial Stadium in Baltimore. It drew 36,100.

The starters were Dave McNally for the Orioles and Jim Lonborg for the Red Sox. Conigliaro batted fifth. Carl Yastrzemski doubled in Reggie Smith for the first run of the game. In his first at-bat, with two runners in scoring position, Conig struck out.

He admitted after the game that he’d been very nervous coming up to bat. “I had 15 nightmares at least” in his hotel room the night before. “Every time I woke up I kept thinking about how they would pitch me today.”7

In the bottom of the first, he caught Paul Blair’s fly to right field for the second Orioles out.

Ken Harrelson singled home Yaz in the top of the third and Boston took a 2-0 lead. Tony C was up after The Hawk, and he walked, but was ultimately stranded on second.

Conigliaro singled in the top of the fifth off Leonhard but was erased at second when George Scott hit into a 4-6-3 double play. He led off the top of the eighth and flied out to left. The Orioles tied the game, 2-2, in the bottom of the eighth on two singles and Don Buford’s sacrifice fly to Tony C in right.

Pete Richert was pitching in the top of the 10th for Baltimore. Frank Robinson moved in from right field to play first base, and the first ball hit to him was hit by Harrelson. He misplayed it and Harrelson reached first base. Tony C swung at the fourth pitch of the at-bat and homered over the fence at the 380-foot mark and onto the grassy hill in left-center field. “My God, I did it,” he wrote. “I really did it. I ran the bases as though I was floating. I was grinning like a little boy.”8

The Orioles weren’t ready to roll over yet, though, and with Sparky Lyle on the mound for the Red Sox, Buford walked and Robinson atoned for his error by homering himself, also to left-center. The score was tied again, 4-4.

Neither team scored in the 11th, though each team left two baserunners.

Conigliaro was up first in the top of the 12th. He drew a walk off Mike Adamson. George Scott singled to center and Conig took second base. Rico Petrocelli walked, loading the bases with nobody out. Russ Gibson flied out to right field but it was too shallow for Conigliaro to try to score. Dalton Jones then hit a ball more deeply to right, and this time Tony tagged and came home. It was 5-4.

Juan Pizarro pitched for Boston in the bottom of the 12th and set down Baltimore one-two-three, getting Frank Robinson and Brooks Robinson, sandwiched around Merv Rettenmund.

Tony Conigliaro had homered to drive in two runs, and then scored the winning run in the 12th. Reliever Bill Landis got the win; Adamson, the loss.

Conigliaro was almost as pleased by the walk as he was by the home run. After swinging and missing in the first two pitches of the at-bat, he took four balls in a row, the third one quite a close call. He later wrote, “It meant I was correctly judging pitches again.”9

After the game, he said, “Just being out there in the lineup was wonderful but that homer means a lot to me. … I had a great day today, better than I dreamed of having.”10

The Boston press was ecstatic. Harold Kaese’s column in the Globe was titled “Tony’s Miracle Now Complete.”11 The Herald’s Tim Horgan wrote, “Not only was it fitting that Conig should slam a two-run homer in the 10th inning yesterday, then score the winning run in the 12th. It was ordained.”12

The game was the first of three extra-inning games in a row for the Red Sox, each one longer than the game before. On April 10 the Orioles won, 2-1, in 13 innings. On Friday, April 11, the Red Sox were in Cleveland and they were the 2-1 winners in a game that was resolved in the 16th inning. In the April 10 game, the one run the Red Sox scored was by Tony C, who singled and scored on a passed ball and then an error. In the April 11 game, he was 1-for-6 and not involved in the scoring.

For the season, Conigliaro played in 141 games, accumulating 566 plate appearances, He hit for a .255 batting average (.321 on-base percentage), with 20 homers and 82 runs batted in. He ranked fourth on the team in both homers and RBIs.

Later in the season, brother Billy Conigliaro also made the Red Sox.

With the April 8 game, Tony C was back. It was never easy, and the various books on his struggle document how hard he had to work at what once seemed so effortless.13 He won the Comeback Player of the Year Award. There wasn’t any question who would win it. In later years, after his tragic death in 1990, the Red Sox began to give an annual Tony Conigliaro Award beginning in 1990. SABR published a book documenting with biographies of the award winners through the 2016 season.14

Tony’s vision deteriorated over time, to the point that after 1971, he was unable to continue to play baseball — though he made another brief comeback in 1975. He made the team, but hit only .123 with two homers in 21 games and so retired.

1 April 17, 1964: It was a fundraiser for the John F. Kennedy Memorial Library, and also the home debut for 19-year-old Tony Conigliaro. He pounced on the very first pitch he saw, a fastball from Chicago’s Joe Horlen, and drove it over the left-field wall, over the screen, and out of the park.

2 “When he led the league in homers with 32 the following year, he became the youngest player ever to take the home-run crown. When he hit home run number 100, during the first game of a doubleheader on July 23, 1967, he was only 22 — the youngest AL player to reach the 100-homer plateau.” — Bill Nowlin, “Tony Conigliaro,” SABR BioProject, sabr.org. https://sabr.org/bioproj/person/52ad9113.

4 He added that, after arriving at the hospital, “The pain was so severe now that even if I could see out of my eyes it would have hurt too much to open them.” Tony Conigliaro, with Jack Zanger, Seeing It Through (New York: Macmillan, 1970), 11, 14. He thought of his parents and how he might never see them again, and not just because of blindness: “Death was constantly on my mind and I still felt I had a good chance of dying.”

5 He was an aggressive ballplayer and had always been one to crowd the plate. In his very first year, he twice was struck by pitches, the first time suffering a hairline fracture in his wrist, the second time a broken ulna that kept him out for a month. In his second year (1965), he hit 32 homers and was the home-run champion in the American League. In spring training 1967 he had suffered a hairline fracture of his shoulder blade. He still dug in at the plate, even despite none other than Ted Williams sending him a warning to back off a bit, the very day before his beaning. Cataneo, 105.

10 Kegg. Will McDonough quoted Conigliaro: All I wanted was to play a big league game again. That would have been great enough. But today … today was unbelievable.” Will McDonough, “Sox Triumph in Opener, 5-4; Tony C. Blasts Homer in Comeback Role,” Boston Globe, April 9, 1969: 1.

13 The principal books are the David Cataneo book and Tony’s autobiographical one, both listed above.