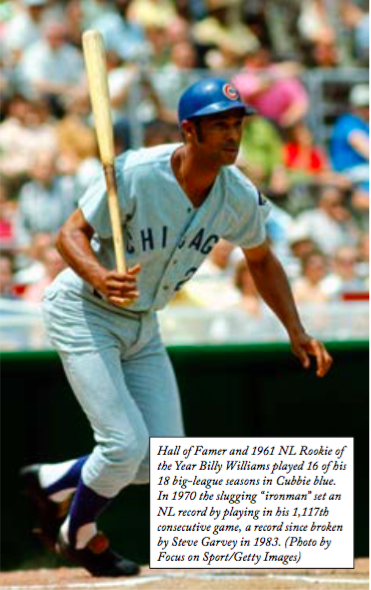 Coming off a thrilling, 7-6 Opening Day win at Wrigley Field with pinch-hitter Willie Smith homering in the 11th inning over the brown ivy in right field (and Ernie Banks homering twice as well), the Chicago Cubs looked to keep the early momentum going in their 1969 season against the Philadelphia Phillies in the second contest on April 9. When Cubs manager Leo Durocher arrived three seasons earlier, he had promised to “back up the truck” and remove players who were underperforming; and by the end of 1968, the result was a much improved team that had climbed to third place and was now looking to dethrone the two-time defending National League champion St. Louis Cardinals.

After the third-biggest Opening Day crowd in Wrigley Field history, 40,769, only 6,297 were on hand to witness the encore. The drop, however, was likely due in large part to the inclement weather expected to hit Chicago. “The flags were pointing stiffly toward the outfield like frozen wash on a clothes line,” described George Langford in the Chicago Tribune.1 Added Allen Lewis of the Philadelphia Inquirer, “A threat of rain seemed likely to postpone the game around noon.

“Unfortunately for the Phillies, it cleared off.”2

On the mound for the Cubs was the New Jersey-born Bill Hands, who along with Ken Holtzman had settled into the role of another solid starter behind staff ace Ferguson Jenkins. In a season dominated by pitching like no other in the modern era, Hands had led the National League in 1968 in permitting the fewest walks per nine innings (1.25), topping the otherwise-overwhelming performances during the year by Jenkins (1.9), the Cardinals’ Bob Gibson (1.8), and the Los Angeles Dodgers’ Don Drysdale (2.1) as Hands allowed only 36 bases on balls in 258⅔ frames of work.

As Hands trudged out to the mound to start the game, taking his usual place behind him in left field was Billy Williams. Playing in his 821st consecutive game that afternoon, Williams was on his way toward surpassing Stan Musial’s National League record of 895 later in the 1969 season.  The native of Whistler, Alabama — appropriate for the way line drives “whistled” off his bat — would make this particular day one of the most memorable among the many in his career.

By the time Williams stepped to the plate in his customary third spot in the batting order in the bottom of the first, Philadelphia pitcher Rick Wise had quickly disposed of the first two hitters, Don Kessinger and Glenn Beckert. Wise, who had first appeared in 25 games as an 18-year-old in the Phillies’ unsuccessful pennant run of 1964, had established himself as a regular starter by 1969. A promising all-around talent as a hitter and fielder from the pitcher’s position, Wise had made only one error in his career coming into the day’s contest.

Off in the distance behind Wise, in the area patrolled by Williams in the top half of the first, was the Phillies’ rookie outfielder Ron Stone.  Playing left field on Opening Day, Stone had incurred the wrath of a swath of fans in the Wrigley Field bleachers, a group that in 1968 had become more and more notorious among opposing players. Regarding his experiences during the previous afternoon, Stone “reported that he was pelted with two eggs, a salt shaker, pins, and cups of ice thrown from the bleachers during Tuesday’s opener,” according to Langford.3

Williams greeted Wise with a sharp liner in the direction of Stone, who got a late break on the ball by first glancing up toward the stands before retrieving it from the base of the wall.  Williams pulled into second with a double, where he was left stranded when Banks forced Ron Santo (who had walked batting after Billy). Williams returned in the third inning to post another two-bagger, this time finding the right-field line to drive in Kessinger and give the Cubs the first run of the game.

After the Phillies came back to tie in the top of the fourth, the Cubs surged ahead once again by a 4-2 score in the bottom half with assistance from an error by Phillies first baseman Dick Allen — part of a rough day both in the field and on the bases for the Philadelphia slugger. “Richie Allen, who was supposed to be less bored playing first base than left field, failed to catch two foul pop ups, made a wide throw to second on a bunt for an error, and tried to go from second to third on a grounder to shortstop in violation of one of baseball’s cardinal rules,” complained Lewis.4 After walking as part of the Cubs’ turn in the fourth, Williams drove his third double of the day toward the gap in left-center in the sixth inning.

Meanwhile, the targets of Bill Conlin — Lewis’s counterpart from the Philadelphia Daily News — were Wise and the other ineffective hurlers used by manager Bob Skinner in the season’s first two days. “The Phillies pitching staff has assumed a defensive posture, throwing the ball prayerfully and hoping nobody gets killed by the line drives,” he wrote the following day.5  Conlin’s words were perhaps prompted by the Cubs’ onslaught in the seventh, in which 11 men batted as Don Young “began the parade of doubles with a two-run shot down the left field line, his third major league hit and first of the season,” cheered Langford in the hometown paper.6 For Young, the start of the 1969 schedule marked the first time he had been in the big leagues since an 11-game debut in 1965.

Among the “parade of doubles” in the big inning was the fourth of the day by Williams, which tied a major-league record and made him the first to accomplish the feat in the senior circuit since Jim Greengrass of Cincinnati 15 years earlier, in 1954. Proving that no part of the ballpark was safe when Williams was at the plate, he pulled two of the doubles and sliced a pair to the opposite field as well. “I can’t even remember getting three in one game,” he said afterward in reflection on his achievement.7

It was more than enough support for the Cubs’ starting pitcher. “Hands said his right arm stiffened slightly during the long seventh,” Langford added about the Cubs’ extended turn at bat, as the pitcher had yielded only three hits and retired 10 of his last 11 to that juncture.8  Nonetheless, he found enough strength to go the distance and secure an 11-3 triumph, which included escaping a bases-loaded jam in the Phillies’ ninth. “I thought I had worked the stiffness out in the eighth by taking a few extra warmup pitches,” Hands said while dumping his elbow in a bucket of ice in the cramped Wrigley clubhouse. “I didn’t feel tired then, but I sure do now.”9

The visiting scribe Lewis, meanwhile, scattered blame all around the Philadelphia side. “The Phillies made enough mistakes of commission and omission to last a month. Of course, the Cubs had something going for them, too, as they assaulted three of the four pitchers used by the Phillies for 16 hits.”10 Along with Williams, batting stars on the day included Banks and Beckert, who each knocked three hits, while Kessinger and Al Spangler added two apiece as every Chicago position player with the exception of catcher Randy Hundley posted at least one RBI.

Yet, despite the fierce wind blowing out toward Sheffield Avenue, there were no home runs in the game as the threat of rain had long subsided. “Relative calm descended on Wrigley Field,” Langford concluded of the afternoon weather that gradually brightened on the North Side, “a seemingly appropriate setting for a man of Billy Williams’ mild temperament.”11

It was the first time in eight years the Phillies had lost the first two games of a season, while the Cubs proceeded to storm out of the gate with 11 wins in their first 12 games in 1969 — a misleading prelude to their most infamous season of all.