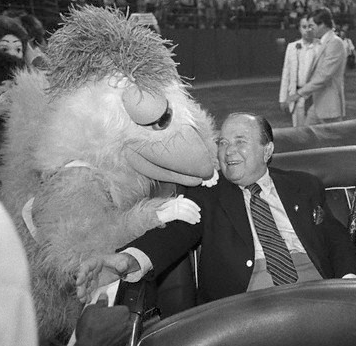 The San Diego Padres had not had a good beginning to 1974. They had just been outscored 25-2 by the Dodgers in a season-opening three-game sweep in Los Angeles. Still, the opening night crowd of 39,083 at San Diego Stadium was primed and ready to cheer on their Padres, as they faced the visiting Houston Astros. After all, there was reason for optimism. Tonight, April 9, was the first home game under the Padres’ new owner, Ray Kroc.

He displayed a heady enthusiasm when he was introduced during the pregame ceremonies. Receiving a standing ovation from the big crowd, Kroc stepped up to the field microphone and proclaimed, “With your help and God’s help, we’ll give ‘em hell tonight.”1

Kroc had made his millions as the chairman of the board and majority stockholder of the McDonald’s hamburger chain. Born in 1902 in Oak Park, Illinois, he grew up rooting for the Cubs. When he was a travelling paper cup salesman, he attended the fourth game of the 1929 World Series at Shibe Park in Philadelphia, perhaps the most infamous game in Cub history. That day, the Athletics overcame an 8-0 Cub lead by scoring 10 runs in the seventh inning to eventually win 10-8.A Cub win would have tied the Series; instead, they lost the fifth game and the Series two days later. “I died,” Kroc remembered later.

The Padres had never climbed out of the National League West cellar in their five years of existence, and had never lost fewer than 95 games. In January, when Kroc heard that a planned purchase of the San Diego club had just fallen through, he turned to his wife Joan and asked, “Honey, what would you think if I bought the Padres?”

Kroc forked over $12 million cash for the team, a drop in the bucket for a man with a fortune estimated at over 40 times that amount.

Despite just having purchased a downtrodden team, Kroc assured everyone that he was a realistic man. “I can’t reasonably expect a contender this year. It’s fun to be with somebody who is down at the bottom, because anticipation is greater than the realization,” he said.3

On this first home game of the season, however, the Padres wasted no time in proving their ineptitude. Starter Steve Arlin lasted only one full inning, leaving the game in the top of the second with runners on first and second and nobody out. He surrendered five runs, and reliever Ralph Garcia another, as the Astros bolted out to a 6-0 lead after two frames. Five more San Diego hurlers couldn’t stop the bleeding; by the time Houston’s Doug Rader grounded out to short to end the top of the eighth, the score was a lopsided 9-2.

Making his way to the public address booth, he grabbed the mike and announced, “Ladies and gentlemen, I suffer with you.”4

“Get that streaker off the field,” his voice boomed throughout the ballpark, “throw him in jail!”5

The crowd suddenly erupted in cheers, appreciative of Kroc’s candor.

Not amused, however, were the ballplayers themselves, both the Padres and Astros.

After the game, San Diego player representative Willie McCovey voiced his frustration. “I wish Mr. Kroc hadn’t done that. I’ve never heard anything like that in my 19 years in baseball. None of us likes being called stupid. We’re pros and we’re doing the best we can. His words will ring in the players’ ears for a long time.”7

In the other clubhouse, Houston player rep Denis Menke said simply, “That was in bad taste.”8 Menke, in fact, would soon protest Kroc’s remarks to Marvin Miller, head of the players’ union.

The Padres came up with three unearned runs in the bottom of the eighth, when Houston’s third baseman, Doug Rader, extended the inning with an error. But the Padres lost the game 9-5, going down meekly in the bottom of the ninth. Arlin took the loss for the Padres, and future Astro broadcaster and manager Larry Dierker earned the win. The Astros owed their success to three doubles: one from center fielder Cesar Cedeno, one from Rader, and one from catcher Johnny Edwards. Cedeno had four RBIs and first baseman Bob Watson two. Dierker scattered two runs and six hits, pitching seven strong innings for the win. Fred Scherman wrapped it up for Houston and was the victim of the three unearned runs.

But all anybody wanted to talk about, both in San Diego and across the country, was Kroc’s tirade. The next day, he got on a plane and headed back to his home in Fort Lauderdale, Florida. Kroc maintained that he had planned the trip for weeks, but others believed he was merely trying to get out of town in order to lay low for a while. Whatever the case, Kroc soon found that escaping the consequences of his actions would prove to be difficult. He was eventually ordered by Baseball Commissioner Bowie Kuhn, echoed by Miller, to make a public apology to the Padres.

Miller, for one, thought Kroc’s actions were unconscionable. “Imagine what would have happened if a player, after being taken out of a game, made an announcement over the P.A. that his manager was stupid. The player would be fined or suspended. I see a direct parallel in the Kroc case.”9

“Certainly I’ll make a public apology,” Kroc insisted. “I used a bad choice of words and I’m sorry. I was bitterly disappointed and embarrassed before almost 40,000 people. I should have said the team wasn’t playing good ball and have urged the fans to stick with us, we’ll get better. In fact, I shouldn’t have gone on (the public address microphone) at all. But once you say a thing, you’re stuck with it. I’m a good sport. But it was the way we were losing that upset me.”

Kroc pointed out that “People have been so great in San Diego. I felt I had to tell ‘em something. It was kind of a figure of speech. I meant to say we were playing lousy ball. It was nothing personal. I’m afraid I talked without thinking.”

Apparently it was the streaker that really set Kroc off. “(He) just added gas to the fire. It was so frustrating.” Then, displaying the customer service skills that had helped to make his hamburger chain so successful, he noted, “At McDonald’s, we try to look out for the customers. It’s the same with our baseball fans. I want them to get value, to get a square deal and a fair deal.”

There were those, however, who felt that Kroc was just another obnoxious owner who had no business buying a baseball team. Sporting News columnist Melvin Durslag, in particular, wasn’t buying Kroc’s apology. “The reason (he’d never seen such stupid baseball playing) was largely due to his inexperience at watching baseball. He knows as much about the sport as Willie McCovey knows about an Egg McMuffin.”10

The Padres lost 102 games in 1974. Before the season was halfway over, Kroc was beginning to wonder what he had gotten himself into. “I bought the team to have some fun. But it is proving to be about as enjoyable as a wake – your own.”11