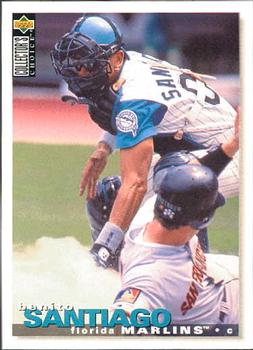 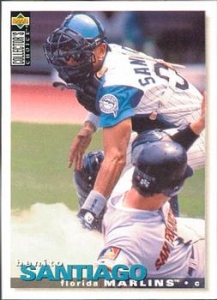 The first week of a new season is supposed to be a time for optimism. But even the most diehard fans of the 1994 Florida Marlins and San Diego Padres knew to temper their expectations.

The Marlins were in their second year of existence and were not expected to seriously compete in any race except the one for last place.1 One writer likened the state of the team to the Dark Ages, stating that “the current epoch in their history will be known as the Mediocre Period.”2 The team did boast one of the game’s best closers in Bryan Harvey, but after scoring a major-league-worst 581 runs in 1993, the real question was whether or not the offense could give him any leads to protect.3

The Padres were coming off of a 101-loss season, and a major story line entering the season was not how many games they would win, but rather how many people would watch them try. After they drew fewer fans than any other club in 1993, one preseason article suggested that the team’s most valuable player “might be the marketing person who figures out how to get live bodies into Jack Murphy Stadium.”4

Unsurprisingly, both teams got off to slow starts. The Padres opened the season against the triumvirate of Maddux, Glavine, and Smoltz, and limped into their series with the Marlins in desperate search of their first win of the season. The Marlins had managed to win a game in their season-opening series against the Dodgers, but had scored only six runs in the series.

The offensive woes only got worse for the Marlins as they opened their series in San Diego. In game one, the Padres shut out the Marlins behind number-five starter Scott Sanders, a guy few Marlins “even knew before the game.”5 Sanders was making only his 10th major-league start and had put up an unremarkable 5-10 record in Triple A the season before.6 That did not stop him, however, from striking out six Marlins in 7⅓ innings.7 The Marlins’ three hits were an all-time low for the two-year-old franchise, and after four games the team was hitting an anemic .169.8

Less than a week into the season, the concern about Florida’s offense was beginning to reach a fever pitch. The Palm Beach Post went so far as to suggest that “the fine print on the barrel” of the Marlins’ bats might say “For Display Purposes Only.”9 Manager Rene Lachemann said the team would take some extra batting practice before the next game, but admitted that “that’s not always the answer.”10 Little did he know how much difference a day would make. Neither, probably, did Marlins outfielder Chuck Carr, though he would prove prescient when he said, “[Y]ou start talking about the trouble we’ve had scoring runs and you just watch. We’ll come out and score 20.”11

On Saturday, April 9, 1994, a crowd of 16,343 streamed into Jack Murphy Stadium to watch both teams try to right their respective ships. On paper, it appeared that the Marlins faced a much taller order than they had the night before. Rather than facing a relatively unknown fifth starter, the Marlins now had to deal with Padres ace Andy Benes. Benes was coming off of a 15-win season and, though the subject of much trade speculation, he was the glue that was expected to hold the fledgling Padres pitching staff together.12

Benes got off to a rough start against the Marlins as Matias Carrillo doubled to lead off the game, breaking a 16-inning streak for the Marlins of failing to get their leadoff hitter on base.13 Carrillo scored two batters later on Gary Sheffield’s single. Jeff Conine followed with another single, but Benes escaped any further damage as the Marlins left two men on base. After giving up three hits and a run in the first inning, Benes gave up only three more hits and no runs through the sixth. The Padres had also been able to push across only one run through six innings against Marlins starter Pat Rapp, and the clubs headed for the seventh inning tied, 1-1.

The wheels fell off quickly for Benes in the top of the seventh. Leading off for the Marlins was veteran catcher Benito Santiago, who came into the game mired in a 2-for-12 slump to start the season.14 Santiago had already struck out twice against Benes, but came through with a leadoff single. It was with the next batter that Benes later admitted he made his “big mistake.”15 Second baseman Jerry Browne attempted to lay down a sacrifice bunt, but never got the chance because Benes walked him on four pitches.16

Kurt Abbott then faked a bunt, but pulled the bat back in time to slap a single over second baseman Bip Roberts’ head to load the bases.17 Benes struck out pinch-hitter Bret Barberie, but manager Jim Riggleman had seen enough. The next scheduled hitter, Matias Carrillo, had four hits in five career at-bats against Benes, and Riggleman later said he thought left-hander Pedro Martinez posed a better matchup.18 But Chuck Carr batted for Carrillo and laced a two-run double. Riggleman went right back to the bullpen, this time summoning right-hander A.J. Sager, but things would only get worse. Sager allowed a two-run double to Alex Arias, then intentionally walked Gary Sheffield to load the bases.

The next two batters, Jeff Conine and Orestes Destrade, had experienced vastly different starts to the season. Conine was one of the few offensive bright spots for the team, having already clubbed two home runs, while Destrade came into the night’s game 0-for-11 to start the season.19 Destrade lamented that during his slump “the guys with the gloves have been killing me.”20 Despite their divergent paths leading into the game, Conine and Destrade were on the same page on this night. First, Conine belted his third home run of the season, and Destrade followed by hitting one where the only guys with gloves had also purchased a ticket, giving the Marlins back-to-back home runs and a commanding 9-1 lead.21

As bad as the eight-run inning was for the San Diego club, Benes perhaps had it the worst as he had to watch his once-promising start go up in flames, since a team rule required all pitchers to remain in the dugout until the end of an inning in which they were taken out of the game.22 He did retreat to the clubhouse after the inning, however, and later admitted, “I don’t even know what the final score was.”23 It was just as well, as after quiet seventh and eighth innings, the Marlins’ bats continued their emergence from hibernation in the top of the ninth.

Now facing right-hander Mark Davis, Gary Sheffield led off the top of the ninth with a walk and Jeff Conine followed with his second home run of the game to make the score 11-1. The home run was Conine’s fourth of the season in only his 21st at-bat, a dramatic increase in production from the previous year, when he did not tally his fourth home run until his 252nd at bat.24 Davis recovered to record two quick outs, but then issued back-to-back walks as the Marlins mounted one more charge. Bret Barberie singled, Chuck Carr doubled, and Alex Arias capped the scoring with a two-run single to stretch the lead to its final tally of 15-1.

In addition to the sources noted in the Notes, the author also accessed Retrosheet.org and Baseball-Reference.com.