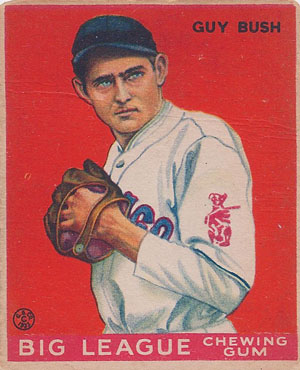 “Those among baseball fans who insist that pitching is a lost art and that the lively ball has destroyed the defensive features of the game might do well to consider the battle between the Cubs and Boston Braves,” wrote Herbert W. Barker of the Associated Press after the two teams played on August 1, 1929.1 In a season of record-breaking offense, the game featured great pitching, only eight hits, and just one run.

Members of the Chicago Cubs felt confident on that Thursday afternoon as they made their way to Wrigley Field. Winners of 17 of their last 20 games, the Cubs had transformed a three-game deficit on July 12 into a five-game lead over the Pittsburgh Pirates in a two-team pennant race. Prior to the doubleheader split with the Braves the day before, the Cubs had strung together nine consecutive victories to kick off a 16-game home stand. The Braves, in sixth place with a 42-58 record, had recently been playing better and had won 10 of their last 18 games. The Braves’ recent success was a product of good pitching, a seemingly annual bugaboo of the long-suffering team that had enjoyed only one winning season since 1916.

Cubs manager Joe McCarthy called on rubber-armed right-hander Guy Bush to continue Chicago’s unrelenting march to their first pennant since 1918. The 27-year-old Bush, enjoying his breakout season, was the hottest pitcher in the National League, having won 14 of 15 decisions; he finished the season with an 18-7 record and led the majors with 50 appearances, including 30 starts. Forgotten by all but the most ardent baseball historians, Bush was one of the most consistent hurlers in the NL, winning 15 or more games seven years in a row (1928-1934), and compiled a 176-136 record during a 17-year career. Boston’s starter, Ben Cantwell, was suffering through a dismal year (4-13), though his 4.47 ERA was almost a run lower than the league average (5.36). But recently, he had pitched some of his best ball against the Cubs, including a five-hit victory and a four-hit loss in his last two starts against them. With a career record of 76-108, Cantwell endured some of the worst Braves teams of the era, including the 1935 squad (38-115) for which he lost 25 games.

An eventful first inning saw six baserunners but only one run. Hoping to extend his career-best winning streak to ten decisions, Bush surrendered consecutive two-out singles to George Sisler and Les Bell before striking out George Harper to end Boston’s early scoring chance. With one out in the bottom of the frame, the Cubs’ Woody English sent a fly ball over the head of right fielder Lance Richbourg for a double – the Cubs’ only extra-base hit of the contest. Cantwell, who normally possessed good control, issued walks to Rogers Hornsby and Kiki Cuyler to load the bases. Riggs Stephenson drew a bases-loaded walk to drive in what turned out to be the game’s sole run. Charlie Grimm, batting seventh, “slapped a low rakish liner to right center” that Richbourg managed to catch, preventing a possible bases-clearing clout.

After putting down the Braves in order in the second and third innings, Bush encountered trouble in the fourth. Thirty-six-year-old “Gorgeous George” Sisler, a lifetime .340 hitter, singled. Cleanup batter Bell hit a grounder to third baseman Norm McMillan, who bobbled the ball for an error. After the runners advanced on Harper’s hopper to first baseman Grimm, Bush walked Freddie Maguire intentionally to load the bases and set up a double play with the slow-footed catcher Al Spohrer at the plate. The plan worked to perfection as the backstop bounced to Hornsby, who flipped to the shortstop English to start an inning-ending double play.

Averaging seven runs per game thus far on their homestand, the Cubs had no answer for Cantwell, who, according to Irving Vaughan of the Chicago Daily Tribune, “curved and speed balled” all afternoon.2 Hornsby, who had been on fire in his last ten games, collecting 18 hits in 44 at-bats (.409), scoring 13 times, and driving in 13 runs, managed a single in the third, but was doubled up by center fielder Hack Wilson. Hitless in the fourth through sixth innings, the Cubs mounted a threat to add to their slim lead in the seventh inning when Grimm led off with a single. After catcher Zack Taylor (acquired from the Braves in a waiver transaction on July 6) popped out, Cantwell erred as he misplayed a ball hit back to the mound by Bush. With Chicago runners on first and second, McMillan flied to center fielder Jimmy Welsh and English fanned to end the inning. In the eighth, Cantwell was replaced by 35-year-old swingman  Dixie Leverett, back in the big leagues after a two-year absence. He retired the side in order.

An aggressive, fast worker on the mound (the game took just one hour and 33 minutes to play), Bush set down Braves in order in the fifth, yielded yet another single to Sisler, in the sixth, and got out of a jam in the seventh after Maguire tripled. With the tying run 90 feet from home plate, Bush was in no mood to play the odds and walk Spohrer intentionally to face the weak-hitting Cantwell. Bush induced Spohrer to pop up to end the inning, and then retired all six batters he faced in the eighth and ninth innings.

Bush won his tenth consecutive decision to improve his record to 15-1 and maintain the Cubs’ five-game lead in the standings. The Cubs continued to play exceptionally well, winning 18 of their next 24 games to run away with the pennant, but the Braves slid to the basement, losing 40 of their last 54 games.