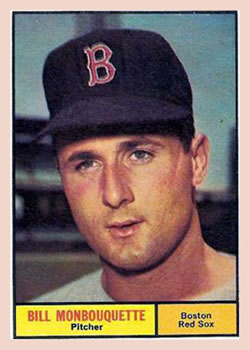 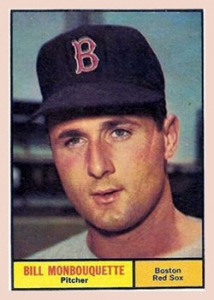 It was an unlikely time for the best game in Bill Monbouquette’s career. An emerging star and fan favorite, the Boston Red Sox’ 25-year-old right-handed local boy from Medford, Massachusetts, entered the 1962 campaign with a 38-36 career slate but hit a rough patch in July after earning his second All-Star berth. “I’ve been lousy the last three or four times out,” he said.1 That was an understatement. In his last four starts, Monbo, as teammates and Hub sportswriters called him, had been shelled for 25 hits and 15 earned runs in just 10⅔ innings. Batterymate Jim Pagliaroni noted that he was “having trouble with his pitching rhythm,”2 while the hurler himself blamed one of his signature pitches, “My curve ball has been getting me in trouble a lot this year.”3 To top it off, Ralph Houk, manager of the AL All-Star squad, dropped him from the season’s second All-Star game, on July 30.4 “I was so bad,” quipped Monbo, “I wasn’t sore.”5

Skipper Pinky Higgins’s eighth-place Red Sox (46-56) were reeling when they arrived in Chicago to resume play after the second All-Star break. They had lost 12 of their last 15 games, trailed the front-running New York Yankees by 16½ games, and looked to Monbo (8-10, 4.58 ERA) to break out of his slump. The Pale Hose were in unusual territory. They had strung together 11 winning seasons, the last five under current pilot Al Lopez; however, a recent 5-8 skid had dropped them under .500 (52-53) and into sixth place. Toeing the rubber for the White Sox was 42-year-old future Hall of Famer Early Wynn, in search of his 298th career victory. Just 5-7 (4.55) thus far in ’62, Gus had fired a five-hit shutout in his last outing, on July 24 against the Senators in Washington, in what proved to be his 49th and final career whitewashing.

A robust crowd of 17,185 packed Comiskey Park on the South Side of the Windy City on a gorgeous Wednesday evening with mild temperatures in the low 70s. Just two days earlier, the city’s North Side team, the Cubs, had hosted the All-Star game at Wrigley Field. While that game featured 20 combined hits and 13 runs in the AL’s dominant 9-4 victory, this one unfolded as a pitchers’ duel. After all six batters were retired in the opening frame, Wynn worked around a two-out single to Lou Clinton and a free pass to Frank Malzone in the second.

In the bottom of the second, Charlie Maxwell connected on a Monbouquette fastball, sending a careening liner to the right corner. Outfielder Clinton made what sportswriter Richard Dozer described as a leaping catch against the wall.6 It proved to be the hardest-hit ball of the game and the “closest thing” to a hit.7 Perhaps stunned by the blast, Monbouquette issued a two-out walk to the next batter, Al Smith. “He started to chase a curve on a 3-2 count and then held up,” said Monbouquette.8 If Monbo had a weakness, it was control. The previous season, he had walked 100 batters (3.8 per 9 innings). In this game, however, Monbo’s control was outstanding. He reached a 3-and-2 count only one other time, when he fanned Jim Landis to end the fifth.

In a performance described by Boston sportswriter Bob Holbrook as “truly brilliant,” Monbouquette overpowered the White Sox.9 After walking Smith, he set down 22 consecutive batters. He had command of his entire arsenal from the game’s outset and kept the White Sox off balance. “At the start I was throwing a lot of curves,” said Monbo about the first few innings, “but at the end it was all just fastballs and sliders.”10 The White Sox hit only seven balls to the outfield all afternoon. In the sixth, second baseman Billy Gardner sprinted to the outfield grass in short right to snare Sherm Lollar’s “fast-falling blooper” to keep the no-hitter intact.11

Monbouquette knew all too well that a scratch hit could derail not just a no-hitter, but also a game. On May 9, he had flirted with a no-hitter for the first time in his big-league career, holding the Yankees hitless for 6⅓ innings until Tom Tresh bunted for a single. After an error and walk loaded the bases, Elston Howard cleared them with a double and Moose Skowron added an RBI single to collar Monbouquette with the loss.

Monbo faced a different challenge in this game: the older-timer Wynn, who debuted in the majors in 1939. Through seven innings, Wynn had matched zeros with Monbouquette, yielding just five hits. He escaped a jam in the fifth after Monbouquette and Gardner led off the frame with singles. Gus seemed to dodge another potential jam in the eighth when Gary Geiger led off with a walk, but was caught stealing for the second out. After Pagliaroni singled to left, the Red Sox and Monbouquette caught a break. Pete Runnels, en route to winning his second AL batting crown in three seasons and fresh off a pinch-hit home run in the All-Star Game, hit a blooper to shallow left. According to the Chicago Tribune, perennial All-Star shortstop Luis Aparicio was “inches short of making catch.”12 Clinton’s third single of the game plated Pagliaroni for the game’s first and only run.

Monbouquette began the ninth just three outs away from becoming the second Red Sox hurler in ’62 to author a no-hitter. (Teammate Earl Wilson had held the Los Angeles Angels hitless on June 26 at Fenway Park.) Monbo whiffed Sherm Lollar for the first out while the Comiskey crowd demonstrated its approval by loudly cheering for the visiting hurler, a fact Boston newspapers found astonishing. “Monbouquette was throwing so hard in the late innings,” gushed sportswriter Bob Ginsburg of the Boston Record American, “that he finished his motion nearly a foot onto the grass beyond the front of the mound on every pitch.”13 With Wynn due to bat, Lopez sent in Nellie Fox to pinch-hit, the last player Monbo wanted to see. “The only guy I was concerned about was Fox – he always manages to get a piece of the ball.”14 One of the game’s best contact hitters and among the most difficult to strike out, the former AL MVP was mired in a month-long slump (17-for-96) and grounded weakly to third baseman Frank Malzone. To the plate stepped Aparicio, whose speed (he was en route to leading the AL in stolen bases for the seventh of nine consecutive seasons) made him a threat to beat out any infield grounder. After fouling off the first two pitches, he took what Boston sportswriters thought was a swing, but home-plate umpire Bill McKinley ruled that he had held up. Monbo fired his 10th pitch of the inning, another fastball, and Little Louis swung and missed.15 Pagliaroni threw off his catcher’s mask and raced to Monbouquette on the mound, where they were immediately met by their teammates in a joyous celebration of the no-hitter.

“I’ve been in baseball since 1930 and I can’t remember a better game than that,” declared manager Higgins.16 Monbouquette faced 28 batters, fanned seven, walked one, and did not surrender a semblance of a hit. “He had that easy motion and that good fastball and slider,” gushed pitching coach Sal Maglie. “Early in the game he had a good curve and then he switched. … [T]hey didn’t know what to expect.”17 Unsurprised by his batterymate’s gem, Pagliaroni attributed Monbouquette’s success to perfect mechanics and delivery. “He wasn’t falling off the mound like he has been,” stated Pags. “He was silky smooth and he got the ball just where he wanted to.”18

Clinton’s clutch hit handed a tough-luck loss to Wynn, whose quest to become the 14th member of the 300-win club would have to wait. He reached a milestone, though, by fanning five to move past Hall of Famer Lefty Grove with 2,272 punchouts. “I had good or better stuff tonight than I’ve had all year,” said Gus, “but he just pitched a better ballgame.”19 Wynn eventually won number 300, but had to wait almost a year to achieve the milestone, and retired after the 1963 campaign with a 300-244 record.

In his next outing, Monbouquette yielded just two runs in eight strong innings against the Washington Senators at Fenway Park, but lost 2-0. His no-hitter helped turn his season around, and he finished with a 15-13 slate. The next season he won 20 games for the first and only time in his career and earned his third and final All-Star berth, but never again flirted with a no-hitter in his major-league career. He posted a 114-112 record and a 3.68 ERA in parts of 11 seasons, retiring after the 1968 campaign.