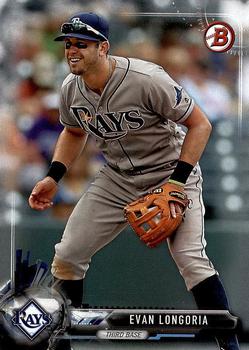 Tampa Bay Rays third baseman Evan Longoria became the first major-league ballplayer to hit for the cycle after an official review reversed a call, turning an inning-ending third out into a double. The 2017 season was the fourth since the beginning of the use of reviews.

The Rays (third place in the American League East Division) were experiencing a downward slide coming into this game, having lost nine of their last 12 games, including a lopsided 14-7 thrashing at the hands of the Houston Astros in the first of a four-game series at Minute Maid Park. Chris Archer was named starter to try to turn things around in the series’ second contest. Houston, meanwhile, had spent all but a week of the 2017 season atop the AL West.1 Coming into this game, the Astros led second-place Seattle by 16 games. Astros manager A.J. Hinch called on Mike Fiers to face Tampa Bay, setting up a battle of two 6-foot-3-inch right-handers. An announced crowd of 22,985 watched the game.

With one out in the top of the first, Tampa Bay’s Lucas Duda singled to left field. He advanced to second when Fiers uncorked a wild pitch with Longoria in the batter’s box. On the very next pitch, Longoria connected, sending the ball deep over the left-field wall. The ball “banged on train tracks atop left field.”2 According to mlb.com, “The 404-foot barreled blast had a 104.8-mph exit velocity with a 35-degree launch angle,”3 giving the Rays a quick 2-0 lead. The next batter, Logan Morrison, launched a line drive into the right-center stands for his 27th homer of the season, and the Rays were ahead 3-0.

In the third, Duda again started the Tampa Bay offense, stroking a double into the left-center gap with one out. Longoria sent a grounder into the right-field corner and legged out an RBI triple. It was his first three-bagger of the season. After Morrison grounded out, Brad Miller walked, putting runners at the corners. Adeiny Hechavarria followed with a single to right, and Longoria scored Tampa Bay’s fifth run.

Archer faced one batter above the minimum through the first four innings. In the bottom of the fifth, though, Archer let the Astros back in the game. With one out, Houston’s Carlos Beltran pulled a pitch down the right-field line for his 13th home run of the year. After Evan Gattis lined out to left, Alex Bregman crushed an 0-and-1 offering over the fence in deep left, cutting Tampa Bay’s lead to 5-2. The two long balls extended to 19 contests the Rays’ record of allowing a home run in consecutive games.4

The 5-2 score held until the seventh inning, when Tampa Bay struck again. Fiers retired the first batter but walked Corey Dickerson, prompting Hinch to pull his starter and bring Reymin Guduan on in relief. After Duda flied out, Longoria singled to left, advancing Dickerson to second base. Morrison then blooped a single into shallow left field, plating Dickerson.

Houston started the bottom of the seventh with three consecutive hits. A leadoff double by Marwin Gonzalez and an RBI single by Beltran chased Archer. Steven Cishek entered and gave up a double to Gattis. Bregman rolled a weak grounder to first for an out, but it was enough to bring Beltran across the plate. Jake Marisnick popped out to second baseman Miller for the second out. Rays skipper Kevin Cash then removed Cishek, calling for Dan Jennings. He faced only one batter, walking Derek Fisher, before he too was replaced, by Tommy Hunter, the fourth Rays hurler of the inning. With runners at the corners, Hunter induced Jose Altuve to ground out to short, ending the rally. Tampa Bay still led, 6-4.

With a single, triple, and home run already in his box score, Longoria stepped into the batter’s box with two outs in the top of the ninth inning, facing Ken Giles. After an initial strike, Longoria lined a ball down the left-field line and “turned on the jets toward second, finishing with a head-first slide as the ball arrived and the tag came down.”5 In a bang-bang play, second-base umpire James Hoye called him out. Cash called for an official crew-chief review. After 65 seconds, the call was reversed. The replay showed that Longoria was indeed safe with a double, and a cycle! Most of the Rays players “stood up behind the railing of the dugout and cheered as the call was reversed.”6

Alex Colome closed the game, earning his 31st save, best in the American League. Archer picked up his eighth win of the season, while Fiers was tagged with his sixth loss. Longoria and Morrison knocked in five of Tampa Bay’s six runs. For the Astros, Beltran and Bregman drove in two runs each.

Longoria, the 2008 American League Rookie of the Year, became the second Tampa Bay player to accomplish the rare feat of collecting a single, double, triple, and home run in a game, following Melvin “B.J.” Upton, who hit for the cycle on October 2, 2009, against the New York Yankees. Longoria was on the Rays team then and remembered when his teammate made history, saying, “It’s a tough thing to do, and I’m very proud, for sure.”7

According to the Elias Sports Bureau, the official statistician for Major League Baseball, “this cycle was the first in MLB since the start of 2014 to feature a review or challenge on any of the hits.”8 After the historic game, Longoria told reporters, “[Cycles] obviously don’t come very often, so I was definitely thinking about it. I felt good at the plate from the beginning tonight. I probably would have been a little bit more confident or comfortable if I only needed a single. But it was kind of surreal.”9

In addition to gaining the cycle because of a review, Longoria set another record. When he scored in the third inning, it was the 766th run scored of his career, which moved him past former teammate Carl Crawford for most runs in the team’s history.10

For the game, Longoria was 4-for-5 with the two runs scored and three runs batted in. He raised his batting average to .276 and his slugging percentage to .469. Since July 4 (24 games), Longoria was hitting .355 (33-for-93) with five homers and seven doubles. He had driven in 17 runs in that stretch.

Perhaps the cycle spurred his teammates into a winning way. The Rays won the next two games from Houston, too, taking the final three games in the series.

1 The Astros were in second place in the American League West from April 8 to 14.

10 On December 20, 2017, Longoria was traded by Tampa Bay to the San Francisco Giants for Christian Arroyo, Denard Span, Matt Krook, and Stephen Woods. In 10 seasons with the Rays, Longoria scored 780 runs.

11 This was Gomez’s second cycle. His first came playing for the Minnesota Twins on May 7, 2008, against the Chicago White Sox.