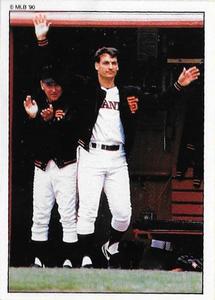 Dave Dravecky, one of the aces of the San Francisco Giants’ pitching staff, had suffered an injury-ridden 1988, in which he pitched in only seven games. But nothing prepared him for the shocking diagnosis he received in September of that year. He had felt a lump on his left (throwing) arm, but he believed it to be scar tissue that had calcified. He had an MRI taken and it turned out to be cancer. That’s when the doctor mentioned the miracle that would be needed for Dravecky to ever pitch again.1

Soon after the diagnosis, the cancer was treated by freezing part of the arm bone and taking out half of Dravecky’s left deltoid muscle — losing 95 percent of the use of it. Giants manager Roger Craig said that when he first saw Dravecky’s arm, he didn’t think his ace would ever be able to pick up a baseball again.2 After the surgery on October 7, 1988, Dave began physical therapy near his home in Ohio. At first the physical therapist had to actually move his left arm. Over time, Dravecky was able to push against some pressure, lift one-pound dumbbells, and start practicing his pitching delivery motion very slowly.3

In the spring of 1989, Dravecky traveled to the San Francisco Bay Area to work at the Palo Alto Sports Clinic with physical therapist Larry Brown, who worked not only on the left arm, but the pitcher’s whole body, to get him in game-playing shape. Brown and the Giants’ orthopedic doctor agreed Dravecky could start throwing. From a tennis ball to a football to finally a baseball, Dravecky and the physical therapist were thrilled to find that his pitching mechanics were immediately in midseason form. Brown was so excited he almost cried. Over the next two months, Dravecky, believing he could pitch in the majors again, “locked and loaded” and was ready for some bullpen sessions and simulated games.4

On July 23, 1989, Dravecky made his second start in the minor leagues with the San Jose Giants in Stockton, California. He had an impressive run of success over the next two weeks. Splitting time between Class A and Triple-A, in three starts Dave posted a 3-0 record with a 1.80 ERA in 25 innings. After his third start, Dravecky felt he was ready to come back to the major leagues.

August 10, 1989, was a sunny, breezy day at Candlestick Park and the Giants played the Cincinnati Reds. The Giants were in first place in the National League Western Division with a 65-49 record and led the second-place Houston Astros by two games. When Dravecky came out to warm up in the bullpen with catcher Terry Kennedy, they met up with a large crowd of media reporters and cameramen. Dravecky couldn’t figure out what was going on as he was just warming up. Then the fans by the bullpen began to clap and within seconds, the whole ballpark –the 34,810 people attending the game — began giving him a standing ovation. Dravecky was so moved that he pulled at his jersey near his heart and started pounding it quickly. Kennedy looked at him and did the same.

Jan Dravecky usually attended games at Candlestick Park by dropping her two young children off in the players’ children babysitting room, but she decided to bring them along to watch their father pitch what turned out to be a historic game. Jan had stayed at home in Ohio during Dave’s rehabilitation stint in the minor leagues, so this was the first time she had seen her husband pitch in a professional game since the cancer diagnosis. “I just cried the whole game,” Jan admitted in 2020. “Tears of joy with a grateful spirit, but I cried the whole time.”5

Dravecky felt it was “like a movie” as he began to pitch.6 “It was like he never skipped a beat,” Terry Kennedy said later, adding, “I just wanted to get him through the first inning as quickly as possible. I figured the sooner he did that, the sooner he’d forget a lot of other stuff.”7 And Kennedy succeeded as the Reds’ second baseman and leadoff hitter Luis Quinones flied out to center field and Jeff Richardson and Eric Davis both grounded out to third baseman Matt Williams. Ten pitches and Dravecky was through the first inning.

As he headed toward the dugout, he received a standing ovation from the Candlestick Park crowd, as he would at the end of each of the eight innings he pitched. After the game, Kennedy told the press, “You have to do extraordinary things to get that kind of reaction from baseball fans. You’ve got to retire, hit a sudden-death home run, or you’ve got to get cancer.”8

Rookie Scott Scudder, with a 2-4 record, started for the Reds and although he walked two in the first, did not give up a run. In the second inning, with one out, Dravecky gave up a one-out double to former teammate Joel Youngblood. Then Dravecky entered the zone: He got Todd Benzinger to fly out to center field and Joe Oliver on a popout to second baseman Robby Thompson. Dravecky set down 17 of the next 18 hitters he faced, giving up only a walk to Oliver in the fifth inning.

Meanwhile, the Giants gave Dravecky the lead in the bottom of the second inning when right fielder Pat Sheridan led off with a triple and scored on Terry Kennedy’s groundout to second base. In the third the Giants scored on a pair of doubles from Will Clark and Matt Williams, but Scudder got out of a bases-loaded jam by getting Jose Uribe, the Giants’ light-hitting shortstop, to ground into a fielder’s choice.

While Dravecky cruised through the Reds lineup a second time, the Giants added two more runs in the fifth inning when Kevin Mitchell walked and Williams hit his sixth home run of the season, into the left-field bleachers. Manager Craig later said, “I didn’t really manage that game, I just sat there in awe.”9

But in the eighth inning, the fairytale almost came to a crashing end as Benzinger led off with a single to center and, with one out, Scotti Madison doubled. Dravecky was able to strike out pinch-hitter Ron Oester. With two outs, light-hitting infielder Quinones, who came into the game hitting .221, belted a three-run homer off a hanging slider. “I should have known better and just gone after him with fastballs,” Dravecky recollected in 2020.10 According to Dravecky, Kennedy later came up to him and said, “Quinones was not in the script.”11 The loss of the shutout did not fluster Dravecky, as he was able to get Richardson to ground out weakly to end the eighth inning without any further damage.

Norm Charlton of the Reds set the Giants down in order in the bottom of the eighth, and Giants manager Craig, as he did so often with the Giants in 1989, called on his bullpen. Don Robinson, one of the Giants’ best pitchers in 1989, said that when the call came to the bullpen, he thought to himself, “Don’t call on me, I don’t want to blow this!”12 During a season in which they won the National League pennant, the Giants had a solid bullpen with two key closers, Craig Lefferts and Steve Bedrosian. “Bedrock” Bedrosian had come to the Giants in a midseason multiplayer trade with the Philadelphia Phillies and got the call. Robinson immediately told Bedrosian, “Don’t blow this!”13 And he did not, notching his 15th save for San Francisco by pitching a one-two-three ninth as the crowd stood and cheered after every out.

After the game, Craig, a longtime veteran of major-league baseball as a pitcher, coach, and manager, said, “I’ve seen a lot of things in baseball, but I can’t remember a game with more drama than this one.”14 Sadly, in his next start, on August 15 in Montreal, Dravecky broke his arm while pitching. Shortly after the new break, his cancer returned. On November 13, 1989, Dave Dravecky retired from baseball.

In June 1991 Dravecky had his left arm amputated and subsequently the doctors found cancer wrapped around the arm’s ulna nerve. As of 2020 Dravecky, calling himself the “One-armed Bandit,” travels the country as a motivational and inspirational speaker. He also worked part-time with the Giants as a community ambassador. Dave and Jan also operate Endurance, a ministry that helps patients with cancer, physical inflictions, and depression.

In addition to the sources cited in the Notes, the author consulted Baseball-Reference.com, baseballalmanac.com, and Retrosheet.org.

Dravecky, Dave, with Mike Yorkey. Called Up: Stories of Life and Faith from the Great Game of Baseball (Grand Rapids, Michigan: Zondervan 2004)

The author also attended the August 10, 1989, game at Candlestick Park and included specific memories from that day.