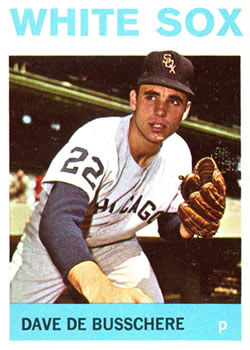 As White Sox pitcher Dave DeBusschere headed to the mound at Comiskey Park for his 10th start of the 1963 season, the 6-foot-6-inch right-hander was anxious to prove what he could do. Unlike his counterpart, Indians starter, Jim “Mudcat” Grant, who was taking his regular turn, DeBusschere’s appearances were irregular at best. Indeed, on a pitching staff headed by Gary Peters and Juan Pizzaro and with relievers Hoyt Wilhelm and Jim Brosnan, DeBusschere, a Detroit native in only his second year in pro baseball, and balancing a developing career in the NBA, had thus far appeared only sporadically. But he “was still bidding to move up in the select company” of a staff leading the league in both ERA and shutouts.1 Consequently, each appearance represented an opportunity to show that he belonged. His last start had been on August 9, four days before, in the second game of a doubleheader. He had pitched 5⅓ innings against the Detroit Tigers, giving up five hits and only one earned run. He had not figured in the decision.

This game was the middle contest in an 11-game homestand for the White Sox and it began in straightforward fashion. After getting Vic Davalillo to ground out, DeBusschere gave up a single to Larry Brown, who then stole second. But Tito Francona flied to center and DeBusschere got Fred Whitfield to pop up to second, leaving Brown stranded. In contrast, facing the right-handed Grant, the White Sox struck fast. Mike Hershberger and Nellie Fox led off with singles, putting runners at first and third. Jim Landis hit a fly ball to right field, not deep enough to allow Hershberger to score. However, cleanup hitter Pete Ward did Landis one better, driving the ball deep enough to bring Hershberger home with the first run of the game. While Grant struck out Charlie Maxwell to end the inning, unbeknownst to the 17,902 in attendance, as they entered the second inning the White Sox had scored all the runs they would need. Indeed, DeBusschere was pitching like a man intent on making that single run stand up, setting the Indians down in order in both the second and the third innings. Striking out two, he did not allow a ball to be hit out of the infield. Grant was almost as efficient, giving up another single to Fox in the bottom of the third, but otherwise escaping any damage.

Things got a little rockier as the teams headed into the middle innings. DeBusschere started the fourth by retiring his eighth batter in a row, getting Brown on a fly ball to left. Francona then singled to right. After another fly ball to left by Whitfield, DeBusschere seemed to be in control. But John Romano singled to left, Al Luplow beat out an infield single, and DeBusschere found himself facing Max Alvis with the bases loaded. But the 22-year-old right-hander got Alvis to hit into a force play, and after 3½ innings, the White Sox still led 1-0.

In the bottom of the fourth the White Sox threatened to widen the lead, as Grant walked the first batter and the second, Charlie Maxwell, reached on an error by second baseman Woodie Held. But like DeBusschere, Grant bore down, and after striking out Dave Nicholson, he got both Ron Hansen and Cam Carreon to fly out to center, ending the threat and leaving the White Sox still clinging to a 1-0 lead.

The Indians again threatened in the fifth. A single by Held was followed by a foul third-strike bunt attempt by Grant, but Davalillo’s single put men at first and second. But DeBusschere got Brown to fly out to center and Francona followed with a popup to second, ending the threat.

Grant opened the White Sox half of the fifth by striking out DeBusschere. Shortstop Brown’s error on Hershberger’s grounder allowed Hershberger to reach base, and when Nellie Fox stroked a double to left, Hershberger scored. Grant got Landis to hit a foul popup to Maxwell at first, but Ward’s double to left scored Fox, making the score 3-0. Grant closed the inning by getting Maxwell to ground to second.

With a three-run cushion, DeBusschere started the sixth by getting Whitfield to ground out to first as the athletic righty completed the play, taking the toss from Maxwell. DeBusschere then got Romano to fly to center and after a walk to Luplow, the big right-hander finished the inning, getting Alvis on a groundball to third. Grant’s sixth was a bit more dramatic. After Nicholson popped to short, Grant’s control deserted him and after walking two and throwing a wild pitch, he found himself with runners on first and second and only one out. But the right-hander got DeBusschere to fly out to center and Hershberger to pop to first, ending the threat.

Indians veteran Early Wynn came on for Grant in the seventh and held the White Sox scoreless for the rest of the game, but in fact the rest of the night belonged to DeBusschere. He started the seventh staked to a three-run lead, and building upon his solid sixth inning, DeBusschere seemed to really find his rhythm. Beginning with Woodie Held, who flied out to center to start the seventh DeBusschere threw three perfect innings, finishing his night by inducing Max Alvis to hit a fly ball to left field to wrap up the 3-0 six-hit victory that left the second place White Sox 8½ games behind the league-leading Yankees.

The game offered snapshots of three pitchers at very distinct and different places on the professional career timeline. Wynn’s mop-up duty came exactly one month after the veteran hurler, having signed with his former team, the Cleveland Indians, in a quest for baseball immortality, had achieved it when he won his only victory of the season, the 300th of his Hall of Fame career. He would retire at the end of the season.

For Mudcat Grant, the game was part of his climb up a career ladder that peaked in 1965 when Grant led the Minnesota Twins to the American League pennant and a gallant seventh game World Series loss to the Los Angeles Dodgers, but would also become the first African-American pitcher to win 20 games in the American League. Grant pitched for seven major-league teams through the 1971 season, after which he retired, ending a career that spanned 14 seasons.

DeBusschere’s shutout win came in what ironically proved to be the next-to-last major-league start of his career. Despite his clear promise, the rest of his baseball career was spent in the minors. And in the end, after toiling for two more seasons on the White Sox Triple-A team in Indianapolis, twice winning 15 games while pitching over 400 total innings, DeBusschere refused a call-up at the end of 1965, instead casting his lot with the NBA. Given that he crafted a Hall of Fame career in that arena,2 few could doubt the wisdom of his choice, but his exit from the game still left unanswered the question of just how good a major-league pitcher Dave DeBusschere could have been.

2 In 1996, the year the National Basketball Association celebrated its 50th anniversary, DeBusschere was one of 50 men chosen the NBA’s 50 greatest players. He had a 12-year career with the Detroit Pistons and New York Knicks. In 1975-76 he was commissioner of the rival American Basketball Association, and helped bring about the merger of the two leagues. During the 1980s he was an assistant coach of the Knicks and the team’s director of basketball operations.