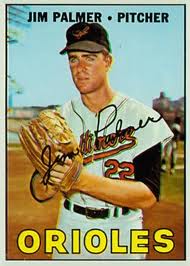 Jim Palmer gained national acclaim early in his major-league career by hurling a four-hit shutout against the Los Angeles Dodgers in Game Two of the 1966 World Series. He was the youngest pitcher (age 20) to toss a complete game shutout in the history of postseason play. The Orioles went on to sweep the heavily favored Dodgers in the series.

A 15-game winner in 1966, Palmer battled shoulder and back problems for the next two seasons, spending most of that time on the disabled list or in the minor leagues. The Orioles placed him on waivers in September of 1968 but none of the 24 major-league teams were willing to risk the $25,000 claiming fee on the oft-injured pitcher. In October both Kansas City and Seattle passed on the future Hall of Famer in the American League expansion draft.

In the fall of 1968, Palmer, known for his high leg kick and fluid effortless pitching motion, played for the Orioles’ Clearwater team in the Florida Instructional League. From there he joined up with Frank Robinson’s Santurce Crabbers in the Puerto Rican winter league, posting a 6-1 record. Speaking about regaining the confidence of the Oriole front office, Palmer told United Press International, “As far as I know my arm is fine now. But I have to show them that. I know it’s a challenge every time I go out there. Why? Because I know what everybody is thinking. They’re thinking this guy is finished.”1

Healthy for the first time in two years, Palmer started off the 1969 campaign with a stellar 9-2 record. However, he was sidelined in late June with a torn muscle in his lower back. After a 41-day stint on the disabled list, he returned on August 9, pitching six strong innings in a 5-1 victory over the Minnesota Twins.

Palmer made his next start on the evening of August 13, 1969, against the Oakland Athletics at Memorial Stadium in Baltimore in front of 16,826 fans. Right-hander Chuck Dobson was in the box for the visiting Athletics. At this point in the season the Orioles were running away with the American League East, 14 1/2 games in front of the second-place Detroit Tigers. Oakland was contending in their division as well, trailing the American League West-leading Minnesota Twins by only one game.

Palmer handled the A’s without incident in the first, allowing only a walk to slugger Reggie Jackson, before retiring the side. In the bottom half of the inning, leadoff man Don Buford got the Birds’ offense rolling with a triple to left-center field. Buford, normally the Orioles left fielder, was playing second base in place of Davey Johnson, who was out with a pulled back muscle. Buford scored the first run of the game when the next batter, Paul Blair, lofted a sacrifice fly to left field. This tally would prove to be the game winner.

Palmer found his groove early and the Athletics were unable to muster a single hit against the 6’3” 195-pound right-hander for the rest of the game. The closest they came was when his mound opponent, Dobson, led off the third inning by blooping a fly ball into no-man’s land behind the shortstop and second base bag. Paul Blair, playing his usual shallow center field, ran in to make the grab but the ball glanced off his glove and fell to the ground. The official scorer gave Blair an error on the play, which kept Palmer’s eventual no-hitter intact. Starting off the sixth inning Orioles shortstop Bobby Floyd, filling in for Mark Belanger, who was out with a lacerated toe, misplayed a short-hop grounder by his Athletics counterpart, Bert Campaneris, but Campy was left stranded on the bases. These were the only two Baltimore errors of the game.

There is usually at least one outstanding defensive play in every no-hitter; in this game there were two. Oriole right fielder Frank Robinson ran back and to his left to haul in a long fly ball off the bat of Athletics first baseman Danny Cater to end the sixth inning. In the eighth, Orioles third baseman Brooks Robinson got in the act, making a nice pick on a hard hit ground ball by pinch-hitter Bob Johnson, and easily throwing out the former Oriole at first base.

In the ninth, things got a little dicey when Palmer walked Jackson, who was leading the major leagues with 42 home runs, on four straight pitches. It was Jackson’s third free pass of the game. Athletics third baseman Sal Bando followed with a line drive to center that Blair gathered in for the first out of the inning. The next batter, Danny Cater hit what looked like a sure double play ball to Bobby Floyd who fought off a nasty in-between hop to get the force on Jackson at second. Palmer then had difficulty locating the strike zone, walking Dick Green and Tommie Reynolds to load the bases. Former Oriole catcher Larry Haney was up next. After working the count to 1-2, Haney hit a grounder to Floyd. The Orioles shortstop had to take a step back in order to glove the high bouncer before tossing the ball to Buford for the last out of the game. Palmer, who earned his eighth straight victory, struck out eight while issuing six walks. He threw 142 pitches on the night, 123 fastballs, one changeup and the rest curves.

When asked in a post game interview about walking Reggie Jackson three times, Palmer replied, “I wouldn’t say I pitched around him. I respect Jackson and his power and tried to pitch him away. I just didn’t make good pitches. I’d like to see him break Babe Ruth’s record but not at my expense.”2

The Orioles amassed eight runs and ten hits off four A’s pitchers — Dobson, Vida Blue, George Lauzerique, and finally Jim Roland. Buford led the Birds attack with a three-bagger, two singles, a walk, and a stolen base plus two RBIs. Brooks Robinson chipped in with a three-run homer off Lauzerique in the bottom of the seventh inning. The ball landed in the extreme corner of the upper deck in left field, just behind the foul pole. It was Robinson’s 20th round-tripper of the season and number 193 of his career, moving him past Cleveland’s Al Rosen (192) on the all-time list.

Palmer helped his own cause with two hits, a single and a double, plus he drew a walk and drove in a run. He scored once but was thrown out at home in the fourth inning by left fielder Reynolds while attempting to score from second base on a Buford base hit. Palmer slid hard into A’s catcher Dave Duncan before tumbling into Dobson, who was backing up the throw behind home plate. Palmer bruised his heel on Duncan’s shin guards but was able to finish out the game.

Earlier in the 1969 season, Oriole pitchers Dave McNally and Mike Cuellar came close to pitching no-hitters against Minnesota. On May 15, the Twins Cesar Tovar singled off McNally with one out in the ninth inning. On August 10, Tovar did it again when he spoiled Cuellar’s no-hit bid with a base knock leading off the ninth. Three days later, Palmer, with his no-hitter on the line, had a little good-natured fun with McNally and Cuellar. In the bottom of the eighth inning he walked in front of the two Oriole aces in the Birds’ dugout, putting his hands up to his throat, mimicking the choke sign. Palmer told Baltimore Sun sportswriter Lou Hatter after the game, “I didn’t take it seriously though until the ninth inning. Then, you realize there are only three outs to go. It was really a matter of luck. They (the Athletics) were always hitting the ball at somebody.”3

Orioles catcher Elrod Hendricks, who was behind the plate for the historic contest, told the Baltimore Sun, “He [Palmer] was quick but he didn’t seem to have good stuff in the first inning. After that he picked up momentum.”4

After the game Palmer spoke to the Associated Press about overcoming his past injuries. “When you have arm trouble you constantly think about your future. But I never thought I was finished. My most serious doubts were last August when I suffered nerve damage in my back and the question was whether the nerve would regenerate.”5

This wasn’t Palmer’s first brush with no-hit ball in the professional ranks. He threw a no-hitter on June 19, 1964, in his first year as a pro with Cal Ripken Sr.’s Aberdeen Pheasants in the Class A Northern League, besting the Duluth-Superior Dukes 8-0. Palmer tossed his second no-hitter on December 22, 1968, defeating the Mayaguez Indians 4-0, in the Puerto Rican winter league.

Palmer, though pleased with his performance against the A’s, still considered the Orioles triumph in the 1966 fall classic to be his greatest thrill on the diamond, telling the Baltimore Sun, “Anybody can pitch a no-hitter. But winning a World Series that’s a team thing. You don’t get in a World Series that often. It’s the culmination of everything.”6