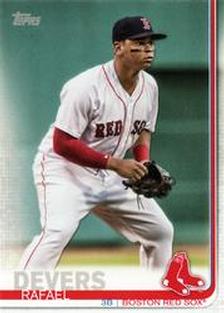 The month of August had not been kind to the Red Sox. They had lost nine of 13 games, including a walk-off loss to the Indians the night before on a Carlos Santana home run. At 63-59, they were third in the AL East, 17 games back of the Yankees. For their part, the Indians were in a close race with the Twins: At 72-47 they were leading by only a half-game.

Mike Clevinger, although lacking Sale’s pedigree, was having a good year himself (7-2, 3.02 ERA). He had last been charged with a loss on June 28. With his flowing hair and twitchy delivery, he was a distinct presence on the mound. This outing did not start well, though: Mookie Betts tripled and scored on Rafael Devers’ stand-up double. But Clevenger avoided further damage by striking out Xander Bogaerts, getting J.D. Martinez on a foul pop, and getting Andrew Benintendi to ground out to first.

Sale took the mound with his career strikeout count at 1,995 in 1,623 innings. He started his progress toward 2,000 by striking out the side: Francisco Lindor, Óscar Mercado, and Santana all went down swinging.

The Red Sox scored another run in the second. After Mitch Moreland struck out, Marco Hernández singled to Lindor at short who just held onto the ball: Hernández was too fast. The catcher, Sandy León, walked. Jackie Bradley Jr. was out on a foul pop off third. Betts singled into left, deep enough for Hernández to score, but León was tagged out trying to go from first to third.2

Sale worked a nine-pitch one-two-three bottom of the second, including a strikeout of Roberto Pérez, bringing him to 1,999.

Devers singled to open the third but was erased on a “strike-’em-out, throw-’em-out” double play with Bogaerts at the plate. His odds of a successful steal weren’t good: He had eight steals but had been caught seven times. After Martinez singled and Benintendi walked, pitching coach Carl Willis paid a mound visit. It must have been effective: Moreland popped up to short to strand the two runners.

The first two outs of the third came easily for Sale: Jason Kipnis flied out and Greg Allen tapped an easy comebacker. Tyler Naquin got the Indians’ first hit, followed by a Lindor single that trickled under Devers’ glove. Mercado became Sale’s 2,000th strikeout, also ending the inning. León grabbed the ball, making sure it got to the authenticator.

With that strikeout, Sale became the fastest pitcher to 2,000 strikeouts at 1,626 innings. Pedro Martínez was the second-fastest at 1,709⅓ innings.

All Clevinger allowed in the top of the fourth was a two-out single to Bradley.

Santana got the Indians on the board with a solo homer to straight center field to lead off the fourth inning. That was all for the Indians, though: Sale struck out Reyes, Jose Ramirez, and Pérez.

Devers led off the Red Sox fifth and dove into second with his second double of the night – the ball took an odd bounce off the lip of the grass and rolled into center field. With one out he held at third on Martinez’s seeing-eye single but scored on Moreland’s two-out base hit. Martinez was safe on a close play at third, sliding into the third baseman’s leg. Hernández hit a line single into left, scoring Martinez and knocking Clevinger out of the game. He had given up 11 hits in 4⅔ innings: more hits than in any of his other major-league starts. Josh D. Smith relieved him and got León out on a quick comebacker to end the inning. The Red Sox led 4-1.

Sale worked a 13-pitch one-two-three bottom of the fifth, including two more strikeouts.

Smith continued pitching the top of the sixth, hitting Bradley with a pitch and walking Betts. That prompted another mound visit by Willis in advance of Devers’ next at-bat. He hit a foul pop that might have been catchable, but the ballboy and bat weights got in the way. That cost the Indians: Two runs scored on Devers’ third double of the game. After Bogaerts struck out, the Indians intentionally walked Martinez. That paid off: Benintendi and Moreland both flied out to left, holding the score at 6-1, Red Sox.

The Indians started a comeback in the home half of the sixth. After Santana worked a two-out walk, Reyes homered to bring the Indians closer: 6-3, Red Sox. Ramírez grounded out to end the inning, but Sale was not pleased: He whacked the Gatorade cooler in the dugout (at least he used his nonpitching hand).

Smith faced the bottom of the Red Sox’ order in the top of the seventh. He didn’t allow any baserunners.

After Sale walked Pérez to start the Cleveland seventh, Kipnis struck out. Allen bounced one down the third-base line that Devers misplayed: Allen made it to second, Pérez to third. It was Devers’ 18th error. Lindor hit a two-out double past Devers, scoring two unearned runs. That ended Sale’s night – he went back to the Gatorade cooler and grabbed a bottle rather than hitting it. Matt Barnes pitched to Mercado, who hit the ball slowly enough that even Devers’ accurate throw didn’t beat him to first. Santana went down swinging, but the Indians had pulled within one: 6-5, Red Sox.

Adam Cimber, the side-arming sinkerball pitcher, took the mound for Cleveland in the eighth. Devers was credited with a one-out single when Kipnis knocked the ball down near second but couldn’t make a throw. Bogaerts singled, putting men on first and second. Cimber got out of the inning when Martinez grounded toward second. Fielding the ball from his shift position, Ramírez tagged Devers with his glove, then threw to second for the force out on Bogaerts for the third out. Devers complained to the umpire that he wasn’t out since the ball was in Ramirez’s throwing hand, not his glove, but the umpire explained that he was out for running out of the basepath rather than being tagged out.

In the Cleveland eighth Barnes walked Reyes, leading off. Josh Taylor replaced Barnes and Mike Freeman pinch-ran for Reyes. After Ramírez grounded out, Nathan Eovaldi (previously scheduled to be the Red Sox starter later in the week) came out of the bullpen to strike out Pérez. Eovaldi preserved the 6-5 lead, getting Kipnis on an easy comebacker.

Tyler Clippard pitched the top of the ninth for the Indians: It took 20 pitches, but he worked a one-two-three inning.

Brandon Workman took the mound trying to preserve the Red Sox’ one-run lead. Allen got a base hit to right and stole second easily. After Naquin struck out, Lindor tied the game with a double off the center-field wall. That was Boston’s 23nd blown save of the 2019 season. With Mercado batting, León and Devers caught Lindor stealing third: Devers tagged him on the back before his hand could reach the base. Lindor was called safe originally but that was overturned on replay. Mercado flied out to end the inning with the score tied 6-6.

Extra innings started with Nick Wittgren pitching to Christian Vázquez (who was pinch-hitting for León). Wittgren finally struck him out on the 10th pitch. Bradley homered well into the stands in right so the Red Sox retook the lead, 7-6. Devers hit a two-out double into center for his sixth hit and fourth double of the night. Bogaerts singled in the infield, but Devers was erased for the third out in a rundown while trying to score.

With that hit Devers made history: He was the first major leaguer to go 6-for-6 with four doubles.3 He finished the year with 54 doubles and 201 hits, leading the American League in doubles4 but second in hits to the Royals’ Whit Merrifield’s 206. Devers also led the majors in total bases in 2019 with 359.

Andrew Cashner took the mound trying for the save. His last save attempts were in 2012: they were all unsuccessful. Santana reached on a bloop hit just out of Devers’ reach. Freeman bunted, but up the first-base line; Moreland grabbed the ball and got Santana at second for the first out. Cashner struck out Ramírez and Pérez for his first career save.

This was definitely the high point of Sale’s year: It was the last game he pitched in 2019. He was placed on the injury list later that week5 and was later determined to need Tommy John surgery.6

This loss pushed Cleveland into second place in the AL Central behind the Twins – which is where they finished the year, eight games back. The Red Sox never left third place, finishing 19 games behind the Yankees.

In addition to the sources cited in the Notes, Baseball Reference, and Retrosheet, the author watched the recorded game at MLB.tv.

1 Sale had been an All-Star in 2012 through 2018. He placed second through sixth in the Cy Young Award votes each of those years.

2 León had two triples in his eight-year career – back in 2016. Having watched him during his three years in Washington, the author can confirm that speed is not one of his tools.

4 Nicholas Castellanos had the National League (and therefore MLB) record of 58 doubles.