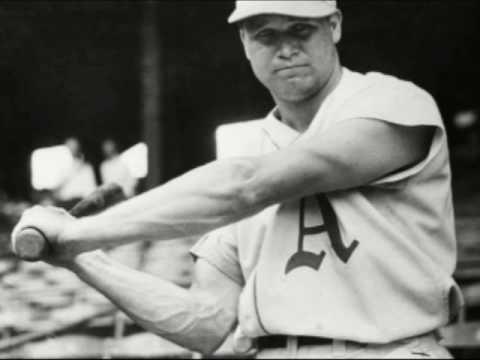 Four months into another season of mashing American League pitching, Jimmie Foxx led the Philadelphia Athletics against the Cleveland Indians at Cleveland Stadium. The two clubs were close together in the league standings, with Philadelphia (53-53) 16 games behind the league-leading Washington Senators, one game ahead of Cleveland (55-57).

In this Monday afternoon contest on August 14, 1933, the Athletics put 11 runners across home plate on 10 RBIs. Foxx drove in nine runs and set a new American League RBI record for one game,1 breaking a 22-year-old mark established by Topsy Hartsel of the New York Highlanders on July 12, 1911.2 Foxx, who just a few weeks earlier was selected to play in baseball’s first All-Star Game (held July 6 at Comiskey Park in Chicago) went 4-for-5 and hit for the cycle.

Two veteran right-handers faced off on the mound. Roy Mahaffey, in his sixth season, started for the visiting Athletics. He sported an unimpressive, 5.44 ERA and a won-lost record of 8-9. The Indians countered with Willis Hudlin, in his eighth season. Hudlin had an ERA two runs better than Mahaffey, at 3.44, but with a tough-luck record of 5-11.

Eric McNair homered to lead off the contest. Then “Foxx opened his one-man attack in the first inning, hitting a triple with Roger “Doc” Cramer and Mickey Cochrane camped on the bases.” Doc Cramer had singled and Cochrane had walked, so Hudlin had faced the first four A’s batters without getting anyone out and was quickly behind 3-0. The triple was a “herculean drive, for the ball passed the cinder path in deep centre.”3 (A prelude to the warning track, this was an earthen berm in front of the center-field wall.) Cleveland Stadium had an expansive outfield, in addition to a seating capacity of more than 78,000. On this day, however, there were only about “4,000 paid admissions, but 5,000 boys watched Foxx’s record hitting as guests of the management.”4

In the second inning Foxx stepped into the batter’s box with the bases loaded and blasted his 35th home run of the season, into the lower deck of the left-field stands. It was Foxx’s first home run in a Cleveland ballpark, and the round-tripper gave him a “record of having hit one or more homers in every park in the American League circuit.”5 In addition, it was his 209th career home run, good for fifth-most in history.6 So far, Foxx had driven in six of Philadelphia’s seven runs.

In the third, Belve Bean replaced Hudlin on the mound to start the frame. Dib Williams stroked a two-out single to left and came around to score on Mahaffey’s base hit, “when [Earl] Averill fumbled”7 the single. This gave the A’s an unearned run and an 8-0 lead. An inning later, Cochrane doubled to left with one out. Foxx traded places with him when he ripped a double to left as well, which “crashed into the grandstand wall as if shot out of a gun.”8

Mahaffey carried a no-hitter through four innings. The Indians finally broke through in the bottom of the fifth. Joe Vosmik drew a leadoff walk, and then Mahaffey gave up consecutive singles to Odell Hale, Willie Kamm, and Roy Spencer, whose infield hit to third allowed Vosmik to score. After Bean struck out and Johnny Oulliber popped out in foul territory along the first-base line, Johnny Burnett worked the count into an RBI walk, plating Cleveland’s second run.

In the sixth inning McNair led off with a single to center. Cramer reached on an infield hit to first baseman Harley Boss. Even though Philadelphia led 9-2, manager Connie Mack called for Cochrane to sacrifice, and his successful bunt moved McNair and Cramer up a base. Foxx then “shot a savage single to centre”9 to complete the cycle. The hit scored McNair and Cramer, giving Foxx nine RBIs for the game.

Cleveland responded with a run in its half of the sixth. After Mahaffey retired the first two batters, Hale walked and Kamm singled. Spencer followed with a base hit to notch his second RBI of the game. The Indians scored two more runs in the seventh with a two-out rally. McNair messed up a potential third out on a grounder by Boss. Averill reached on an infield single and Vosmik doubled, accounting for two unearned runs. That would be all of the scoring for the game.

In the final inning, Foxx’s perfect day was ruined after he struck out to lead off the frame.. He had gone 4-for-5 and hit for the cycle. Foxx struck all four of his hits hard and true, “as clean as the Queen’s lace handkerchief.”10

Philadelphia left only five runners on base. Foxx accounted for three of them, from his triple, double, and single. The top of the A’s lineup had nine hits and scored eight runs. Mahaffey helped his own cause with a 2-for-4 afternoon at the plate, including a run scored. On the mound he limited the Indians to seven hits (five of them were considered scratch hits11) and three earned runs, bringing his record to 9-9. This was Mahaffey’s fifth victory of the season over the Indians without a defeat. It was also his eighth straight win over the Tribe going back to the 1932 season. Hudlin was charged with his 12th loss of the season, allowing seven earned runs in two innings of work.

Foxx’s cycle was the eighth in Athletics history (since 1901) and the team’s third in two weeks. Foxx followed Cochrane (August 2) and Mike “Pinky” Higgins (August 6).12On August 17 Cleveland’s Averill returned the favor and hit for the cycle against Philadelphia..

Foxx continued his big hitting through the end of the season. He ended up with 48 homers, 163 RBIs, and a .356 batting average, becoming the first A.L.Triple Crown winner since Ty Cobb in 1909. Double-X had narrowly missed winning the Triple Crown in 1932, the year he hammered 58 homers. Chuck Klein of the National League’s Philadelphia Phillies also won the Triple Crown in 1933, with a .368 average, 28 home runs, and 120 RBIs. Foxx clearly outslugged his crosstown rival.

1St. Louis Cardinals first baseman Jim Bottomley set the major-league record of 12 RBIs in one game on September 16, 1924, when he went 6-for-6 with two home runs against the Brooklyn Robins. Sixty-nine years later, on September 7, 1993, the Cardinals’ Mark Whiten knocked in 12 runs in a game against the Cincinnati Reds. New York Yankees second baseman Tony Lazzeri set the American League record when he drove in 11 runs on May 24, 1936. Lazzeri smacked three home runs (including two grand slams) in a 4-for-5 performance against the Philadelphia Athletics, breaking Foxx’s record.

2Hartzell was 2-for-4 against the St. Louis Browns, with a double, a grand slam, and a sacrifice hit (play-by-play is not available). According to the New York Times, Hartzell’s mark of eight RBIs in one game was equaled by Harry Heilman, Lou Gehrig, Carl Reynolds, and Earl Averill before Foxx set the new standard.