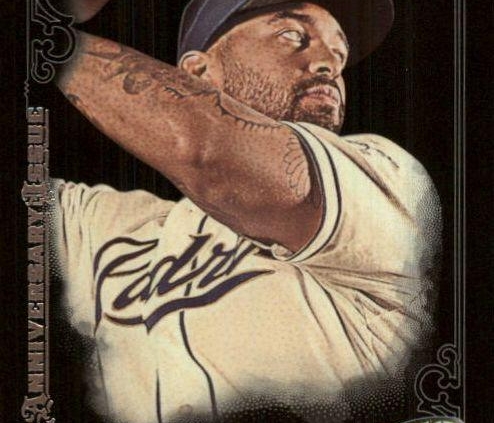 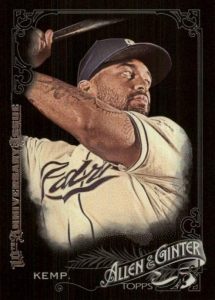 For the first 46 years of their history, from Opening Day in April 1969 until well into the 2015 season, the San Diego Padres were a team without two significant individual accomplishments: (1) having a pitcher throw a no-hitter, and (2) having a batter hit for the cycle. The second streak ended on August 14, 2015. Playing right field against the Colorado Rockies in his inaugural season with the Padres, Matt Kemp became the first Padre to deliver a single, double, triple, and home run in the same game.

One month after the 2015 All-Star break, the 55-61 Padres were sitting in fourth place in the National League West, 10 games behind the Los Angeles Dodgers. They had lost seven of their last nine games and, except for an 11-6 win against the Cincinnati Reds, San Diego was having trouble scoring runs (averaging 2.5 runs per game in those other eight contests). After nine seasons playing for the Los Angeles Dodgers, Matt Kemp was traded to San Diego,1 but for the first few months of the season, he was not making a difference offensively. The home-team Rockies were even worse, holding down the bottom of the West Division standings with a mark of 47-67. Colorado had lost eight of its last 11 games.

Before a Coors Field crowd of 33,697 fans, Yohan Flande (2-1, 3.86 ERA) started for the Rockies, opposed by San Diego’s Tyson Ross (8-9, 3.39 ERA). In the top of the first, the Padres jumped on Flande. After Yangervis Solarte grounded out to open the game, Derek Norris singled to right. Kemp then drove a line drive deep beyond the center-field fence, giving the Padres a 2-0 lead. Melvin Upton singled and advanced to second on a wild pitch. Jedd Gyorko stroked a double down the left-field line, plating Upton. The Rockies answered in their half of the first, with Nolan Arenado hitting a two-out home run deep to left with Carlos Gonzalez aboard, cutting the Padres’ advantage to 3-2.

In the third, Kemp led off with a line-drive single to center. Upton walked, but Gyorko grounded into a double play, erasing Upton at second. Clint Barmes flied out to left to end the inning. Colorado loaded the bases in its third on a single by Jose Reyes and back-to-back walks to Arenado and Ben Paulsen, but they could not score, either.

An inning later, the Rockies tied the game when Nick Hundley tripled into right field and jogged home on Brandon Barnes’ sacrifice fly to right. San Diego regained the lead in the top of the fifth inning. Norris smashed a 2-and-0 pitch into the seats in left for a solo home run off Flande. The Colorado southpaw retired the next six batters before departing at the end of the sixth inning.

Ross was tagged for a first-pitch leadoff double in the bottom of the sixth by D.J. LeMahieu, and Padres skipper Pat Murphy brought Bud Norris on in relief. LeMahieu moved to third when Hundley grounded out to short, and then Barnes launched a triple into the gap in right-center, once again knotting the score.

Rockies manager Walt Weiss sent in lefty Kenny Roberts to start the seventh. Roberts allowed a single to Wil Venable (pinch-hitting for Bud Norris) but then flashed the leather by throwing Venable out at second when Solarte dropped a bunt in front of home plate. Weiss strode to the mound and called for Rafael Betancourt, who fanned Derek Norris for the second out. Kemp followed with an RBI double to deep center that “ignited a four-run rally.”2 Upton was intentionally walked. With two outs and two on, Gyorko hit his eighth homer of the season, breaking the game open and giving his club the 8-4 lead.

The Rockies added a run after the seventh-inning stretch on back-to-back singles by Gonzalez and Arenado. The latter was a slow roller to Padres third baseman Solarte, who threw the ball away, allowing Gonzalez to race around the bases and score. Arenado was credited with a single (with no RBI) but ended up at second base.

As the ninth inning began, San Diego still held its three-run lead. Justin Miller replaced Gonzalez Germen on the mound for Colorado and walked Solarte on four pitches but struck out Derek Norris. That brought Kemp to the plate. Kemp admitted, “Before I went up to bat, I heard [Melvin Upton Jr.] say, ‘Hit a triple.’ And I did.”3 Kemp took the first pitch from Miller for a ball. On the next offering, Miller threw a slider that hung out over home plate. Kemp connected, and at first, he admitted, “I was actually looking at the ball because I thought I hit a home run, but I didn’t get as much as I thought I did. It just kicked off the wall. I like home runs, but it was my first cycle … so I think the cycle would be better.”4 Hitting coach Mark Kotsay also predicted the feat, telling Padres manager Murphy, “He’s going to hit a ball off the right-field fence and it’s going to ricochet.”5 And sure enough, it did. Solarte scored the ninth and final tally for San Diego. Despite Arenado’s single in the bottom of the ninth, the Rockies went quietly, ending the game. A Padres batter had finally hit for the cycle!

The milestone triple was Kemp’s third and last of the season. According to mlb.com, Kemp said, “When I slid into third base, [third-base coach Glenn Hoffman] says, ‘That’s the first one.’ I said, ‘Yeah that is my first one.’ He said, ‘No … that’s the first one for the Padres.’”6 Later, Kemp was told that it had been 7,444 games without a Padres batter hitting for the cycle.7 Kemp also remarked, “I’ve come close plenty of times. I’ve just never gotten that one hit I definitely needed. That triple is the hardest one to get.”8

Murphy praised Kemp, saying, “That was special. I knew about it a few years ago, no one has ever thrown a no-hitter, no one has ever hit for the cycle. It’s a matter of time before these records are broken. I think it’s fitting it’s Matt Kemp, he’s part of a new beginning.”9

Eleven pitchers were used in the game, and they faced 81 batters. Kemp was the hero for the Padres, while Arenado was 3-for-4 in a losing cause for the home team. The seventh-inning rally made a winner of Bud Norris (3-9), who had just joined the team,10 and he pitched the sixth against the Rockies, although he did allow an inherited runner to score.

According to the San Diego Padres staff, “There have been 361 times when a player finished one hit shy of a cycle. Of these, 258 times a player was a triple short.”11 The great Tony Gwynn had never hit for the cycle. Hall of Famers Roberto Alomar, Willie McCovey, and Dave Winfield had never hit for the cycle while in a Padres uniform.12 Beat writer Alec Nathan wrote, “Although the Padres are on the outskirts of the playoff picture, Kemp’s late-season improvement has given them something to take solace in as the 2015 campaign begins to wind down.”13

Kemp said, “Anytime you make history, it’s special. Not everybody does that, I’m just glad I got the opportunity to do it.”14 Two seasons later (on April 10, 2017), the Padres’ Wil Myers hit for the cycle against the same Colorado Rockies, becoming only the second Padre to accomplishment the rare feat. As of the end of the 2017 season, only the Florida/Miami Marlins do not have a player who has hit for the cycle. However, the Padres remain the sole major-league team without a no-hitter.

1 On December 18, 2014, the Dodgers traded Kemp and Tim Federowicz (plus cash) to the Padres, in exchange for Yasmani Grandal, Joe Wieland, and Zach Eflin.

10 The Baltimore Orioles released Norris on August 8, and the Padres signed him on August 11.