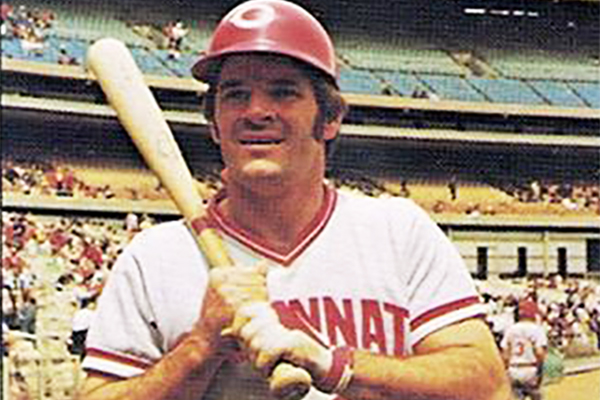 Pete Rose’s return to the Cincinnati Reds on August 17, 1984, marked a high point in a desperately low season for the team. At 51-70, the Reds had little left to play for and only the San Francisco Giants gave the Reds a cushion from the dampness of the NL West basement. Rose, Cincinnati-born and -raised, was the hometown hero in every sense and his gritty play not only earned the respect of the city but reflected it as well. He had been back to Riverfront Stadium since his departure after the 1978 season, but only in the visiting colors of the Philadelphia Phillies and the Montreal Expos. It never looked quite right, and the sight of him in those uniforms only split fan allegiance. For Rose to return as a member of the Reds seemed to restore the natural order in the baseball world and, also, in Cincinnati.

Rose, at 43, clearly was not the player of his prime seasons. Aside from being older, he was a bit heavier and slower in foot speed and reflexes. When Reds general manager Bob Howsam reacquired him from the Expos for the small price of Tom Lawless, it was to primarily manage a rudderless team.1 Rose was only 129 hits away from tying Ty Cobb’s career record, however, and his sense of baseball history, and his place in it, meant he needed to play — even part-time as a player-manager.2

Initially, Rose had himself out of the lineup in favor of Nick Esasky for the August 17 series opener against the NL East front-running Chicago Cubs. Perhaps he wanted to ease back into his familiar surroundings and get a feel for his new managerial portfolio. Any delay in Rose’s return to the diamond, however, was not palatable for the Reds’ fan base that was starved for excitement. Esasky, 19 years Rose’s junior, was told by his new bench boss that he could play Saturday instead. “They didn’t come out to see me manage,” Rose said. “They came out to see me play.”3

Come they did. The Reds averaged only 15,752 attendees per home game in 1984 but 35,038 people reportedly watched Rose’s return in person. Fans brought welcoming signs with the familiar word play (e.g. “Re-Pete the Glory”) and were given a certificate to commemorate their attendance — much like those handed out for other Rose milestones.4 To set the tone, fans loudly rooted for Rose moments before the game started as he marched to home plate to conduct his managerial duties and exchange of lineup cards with the opposing manager — in this case the Cubs’ Jim Frey. Frey, in some ways, was the ideal manager for Rose to face in his debut. Frey was not only a Cincinnati native but, like Rose, attended Western Hills High School.

Rose started ace pitcher and noted Cub-killer Mario Soto. Soto sported a 2.04 ERA over his previous five starts and his 12-6 mark entering the game was particularly impressive given the Reds’ ineptitude. Media speculated that the biggest challenge Rose faced in his new managerial role was overseeing his pitchers. The Reds did not possess a first-rate fireman, for example, with Ted Power and rookie John Franco co-leading the club with a paltry four saves each in mid-August. Detroit Tigers manager Sparky Anderson told newspapers, however, that he saw no serious challenges for his former charge. “If Pete does this job like he’s done everything else in his life, he can’t lose,” offered Anderson.5

Rose’s debut as manager included no bullpen activity. Soto overcame a shaky start and did not allow a Cubs run after the third inning. It was Soto’s 11th complete game of the season, tying Joaquin Andujar for the NL lead. The Cubs started Dick Ruthven, who was a back-of-the-rotation starter by 1984 and a nonfactor in the postseason that fall. On this night Ruthven pitched six unspectacular innings, giving up five earned runs and nine hits before being relieved by the equally ineffective George Frazier. Frey’s decision to pitch righties meant the switch-hitting Rose batted only left-handed.

There were plenty of chances to fete Rose as he began his second act with the Reds. It began with the pregame home-plate gathering but continued throughout the hot, humid Cincinnati evening. As Rose hustled, naturally, to his first-base station to begin the top of the first inning, the sizable crowd rose to its feet and applauded the entire time he skidded grounders across the Riverfront artificial turf to his fellow infielders during warmup. Rose made two putouts in the first, including, to the delight of the audience, one at the back end of a 1-6-3 double play that dribbled off the bat of Cubs first baseman and Cincinnati native Leon Durham. That the Reds trailed 1-0 as Gary Matthews singled in Bob Dernier did nothing to dissipate the night’s electricity.

Rose slotted himself second in the order, sandwiched between the fleet-footed Gary Redus and slugger Dave Parker, yet another Cincinnati product involved in this historic game. Redus singled to left field leading off the home first. Fans stood and cheered as Rose stepped to the plate for his first at-bat. Before a prolonged ovation could be delivered, Ruthven fired his first pitch. Rose feigned a bunt but retracted his bat, just enough distraction to allow Redus to beat Jody Davis’s otherwise perfect throw to second base. Two pitches later Rose ripped the ball up the middle. Dernier’s attempt at a barehanded play in center field misfired and the ball rolled to the wall while Rose chugged around the bases in pursuit of third base. He dove into the bag in his patented style, despite it being unmanned by Cubs third baseman Ron Cey as no throw was forthcoming. Rose took Dernier’s mistake as a good omen. “I knew right then everything was going to be all right,” he said. “Dernier doesn’t make many errors.”6

Rose, uniform dirtied in a familiar fashion, scored later in the inning on Brad Gulden’s double to right. The Reds led 3-1 after the first but the two clubs, so distanced in the standings, were knotted 4-4 into the fifth inning, the key blow being Durham’s three-run homer in the third inning. The score was still tied when the Reds came to bat in the bottom of the fifth. In a game so dominated by those with Cincinnati as their birthplace, Parker put the Reds up for good with a solo homer to right.

The final drama was fittingly provided by Rose in his last at-bat. The veteran came to the plate with Reds shortstop Tom Foley, an important potential insurance run, standing at second with two outs. Rose fisted a pitch in on his hands into left field for a run-scoring double with chants of “Let’s Go Pete!” preceding his swing. Rose, again, dove headfirst despite no play at the base. His uniform, considerably soiled at this point, seemed a focal point in the fans’ ovation. With that play, the scoring was complete and the game finished 6-4 in the Reds’ favor.

Overshadowed by his teammate/manager, Reds second baseman Ron Oester extended his hitting streak to 16 games, something Rose forecast. “Pete told me before the game I’d get my hit,” Oester told the Cincinnati Post.7 The streak lasted five more games before it was stymied by the Pittsburgh Pirates and Jose Deleon.

The season was hardly successful for the Reds based on the team’s 70-92 finish. Rose did provide excitement for the fan base, however, hitting .365 in 26 games. Moreover, he gave fans something to be excited about for 1985 — he was just 95 hits away from surpassing Cobb. Bill Travers, from nearby Lexington, Kentucky, excitedly told the Post in the postgame glow of Rose’s performance, “I want tickets for Saturday. I want tickets for Sunday. I want season tickets for next year. Win or lose, Pete’s got my support.”8

In addition to the sources cited in the Notes, the author consulted Baseball-Refeerence.com and the WGN broadcast of the game at youtube.com/watch?v=7xxCLNlK2DQ&t=6621s.

2 Cobb’s status as Hit King was clear but his total is somewhat contentious — 4,191 or 4,189. Readers interested in learning more about the discrepancy should consult Kirk Kenny, “Did Rose Really Set Hits Record Against the Padres?” San Diego Union–Tribune, September 11, 2015. sandiegouniontribune.com/sports/padres/sdut-pete-rose-breaks-ty-cobb-hit-record-4192-2015sep11-story.html.