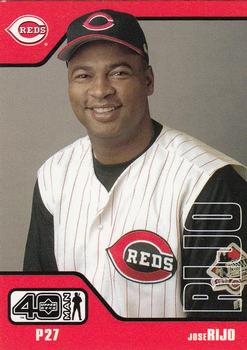 Going into a night game on Friday, August 17, 2001, the Cincinnati Reds were 48-72, in fifth place, 20½ games behind the Houston Astros in the National League Central Division. Their opponent, the Milwaukee Brewers, were 50-68, in fourth place, 17½ games behind the Astros. Baseball often provides great examples of life lessons; this game featured a player’s comeback story of enormous determination and courage.

Twelve years earlier, the major-league season ended with the ace pitcher of the Cincinnati Reds, José Rijo, dominating the high-powered Oakland Athletics in the fourth and final game of the 1990 World Series. Rijo, a hard-throwing right-hander, had allowed only two hits and one run in 8⅓ innings while striking out nine to win his second start of that series sweep.1 He was on top of the baseball world and was named the World Series MVP.

Over the next four seasons (1991-1994), Rijo averaged more than 31 starts and 211 innings, winning 15 games twice, 14, and then 9. He was definitely a fan favorite in Cincinnati, but bone spurs and ligament-related elbow issues were becoming persistent. In 1995 Rijo was 5-4 with a 4.17 ERA when after 14 starts he was sidelined with a right-elbow injury. To Reds fans, it was a setback, but the 30-year-old right-hander hoped to be back before too long.2

On August 22, 1995, Rijo had Tommy John surgery to repair the damage and remove the bone spurs.3 His recovery had complications and he needed further surgery in April and November 1996 and in August 1997, He sat out 1998 through 2000 before working his way up again through the Reds system.4

Even diehard fans had given up on seeing Rijo in a Reds uniform again, or even as a major leaguer. He was out of sight and out of mind. He was retired and appeared on the Hall of Fame ballot briefly.5

But on the 79-degree night of August 17, 2001, in front of 29,214 fans at Cinergy Field (formerly known as Riverfront Stadium), the crowd went wild when Rijo appeared on the field for the top of the eighth inning against the Brewers. He looked a little older and different in the new Reds uniform.6

Rijo gave up a leadoff single to José Hernandez, who was hitting fifth and playing shortstop for the Brewers. Brewers left fielder Lou Collier hit a line drive to right field, where Adam Dunn made an over-the-shoulder catch before bumping into the wall. Hernandez, who had rounded second, made it back to first. Brewers third baseman Mike Coolbaugh bounced to third baseman Dmitri Young, who forced Hernandez at second. Brewers catcher Henry Blanco hit a sinking line drive to left, where Brady Clark made a diving, sliding catch on his chest to retire the side. The Reds trailed the Brewers, 5-1, as the crowd stood and cheered Rijo. He was met at the dugout steps by first baseman Sean Casey with a high hand slap.

Rijo came back to the mound for the ninth. He walked Mark Sweeney who pinch-hit for pitcher Chad Fox to lead off the inning. The top of the order followed and center fielder Devon White hit a popup; shortstop Juan Castro drifted back a few steps onto the grass to corral it. Second baseman Mark Loretta doubled to advance Sweeney to third. Rijo intentionally walked number-three hitter Jeromy Burnitz to load the bases. Up next was right-handed-hitting cleanup hitter Richie Sexson. Rijo struck out Sexson swinging and then fanned Hernandez to work out of the jam. Rijo walked back to the dugout to another loud ovation as manager Bob Boone applauded in the dugout. Boone had said before the game, “I would like to get him in a non-stress situation.”7 It started out as non-stress but ended in a stressful last inning. As Rijo arrived back at the bench, his teammates were there to greet him with high-fives all around.

It had been a long-awaited but now successful, if even a little nerve-wracking return for Rijo to his hometown team. He finished his comeback game by facing 10 batters over two scoreless innings. He threw 37 pitches with that fragile right elbow, 21 for strikes, while surrendering two hits and two walks (one intentional) and striking out the last two hitters he faced with the bases loaded. The Reds did lose the game, 5-1, but Rijo had kept his offense within reasonable striking distance over the final two frames. It seemed like old times with the excitement he generated striking out those final two hitters in the ninth.

“I cannot describe with words how I feel right now. It’s beyond anything in my life that I ever accomplished,” an emotional Rijo said after the game. “No moment could beat this moment today, until I die and go to heaven and meet Jesus.”8

Ken Griffey Jr., the Reds center fielder, had the only RBI for Cincinnati on the night of Rijo’s comeback when he singled to right to drive in second baseman Todd Walker in the fifth inning. Griffey teased that he was just a little kid the last time Rijo had pitched in the majors.9 This pulled the Reds to within two runs at 3-1; the Brewers had plated two in the fourth on a triple by Burnitz to score Loretta and a single by Hernandez to score Burnitz. The Brewers added one run in the fifth on a solo home run to right by Burnitz. In the sixth, Coolbaugh doubled to left-center to drive in Collier and then Blanco capped the scoring with a single to left to score Coolbaugh. Mac Suzuki started for the Brewers and won his fourth game against eight defeats. Lance Davis started for the Reds and surrendered all five Brewers runs. His record fell to 5-2. The time of the game was 3:09, but it was otherwise timeless for the veteran right-hander Rijo, whose best days and fastball were long behind him.

Rijo continued his comeback and persevered into the 2002 season. He rejoined the Reds rotation on April 21, 2002, and beat the Cubs, surrendering only three hits over five innings and not allowing an earned run. (His last win as a starter before his comeback was also against the Cubs, on July 13, 1995, before his elbow injuries crippled him into six years of “retirement.”10)

A week after defeating the Cubs, Rijo started a game at Cinergy Field for the first time since 1995 and pitched the first-place Reds to an 8-4 win over the San Francisco Giants. He threw six innings and gave up only two runs on five hits during a steady rain that halted the game in the eighth inning. Rijo said, “I feel like a hurricane today, I am bigger than the rain.”11

Rijo’s personality was always larger than life and that earned him the final start at Cinergy Field, on September 22, 2002. In front of 40,964 fans, he lost to the Phillies, 4-3, surrendering three runs on eight hits in 4⅔ innings. Rijo’s career was finally coming to an end, but what a ride it had been from injury-plagued to super-stardom, to disappearing into an injury-forced retirement, to a comeback six years later that continued into one last year of memorable moments of determination and courage.

Rijo’s comeback earned him the Tony Conigliaro Award for the “player who has overcome adversity through spirit, determination, and courage.”12 He even appeared briefly on the Hall of Fame ballot for a second time.13 A rare feat indeed. Rijo proved that his comeback story was indeed worth telling.

I would like to thank my wife, Diane, and her mother, Carol Ann, for driving from Cleveland to Columbus in the fall of 1990 to buy me the World Series Championship sweatshirt, which prominently features José Rijo walking off the mound tipping his cap in Game Four of the 1990 World Series sweep. This served as the inspiration for this comeback story.

Also, thanks to my son, Adam, and daughter, Samantha, for being Reds and Indians fans and to Samantha’s boyfriend, Danny, for being a huge baseball fan, too.

In addition to the sources cited in the Notes, the author relied on Retrosheet.org and Baseball-Reference.com, as well as the SABR BioProject.

5 One can only appear on a Hall of Fame ballot if retired for at least five years.

6 “MIL@CIN: Rijo back on mound for first time since ’95,” YouTube Video. Accessed May 14, 2020. youtube.com/watch?v=KuMcJFVfBEU. The look from the early to mid-1990s had changed drastically from the traditional all white with red trim home uniforms. It was a different era in Reds baseball when Rijo finally returned.