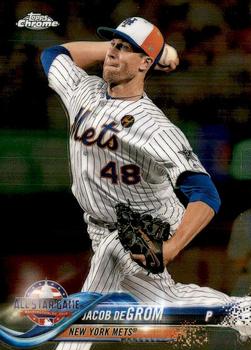 Jacob deGrom’s pitching made him one of the leading contenders for the 2018 Cy Young Award. He was one of the few bright spots on a Mets team that had unraveled after starting the season with a 12-2 record. DeGrom’s 7-7 record did not reflect his feats from the mound. They were the result of his teammates’ lack of offense in support of his outstanding pitching.

The Mets arrived in Philadelphia with a 51-67 record. After winning the opening game of the series, they had lost the next two. If deGrom could lead them to victory this evening, New York could head back to New York with a split in the series.

Philadelphia was just a half-game behind the Atlanta Braves in the National League East. They needed a win to keep pace with the Braves and possibly earn a playoff spot. Jake Arrieta started for the Phillies. This was his third start in August and he was still looking for his first win of the month.

Arrieta got the Mets out in order in the first. Todd Frazier doubled to left in the second but he advanced no farther when Austin Jackson struck out and Jose Bautista popped out to the first baseman. Arrieta continued to pitch well, throwing just 15 pitches to get the New York out in the third.

The Mets got on the board in the fourth. Jeff McNeil led off the inning with a single. He moved to third on a botched pickoff attempt, and Wilmer Flores brought him home two pitches later with a single. After Michael Conforto struck out, Frazier got his second hit of the game, a single. But the Mets couldn’t get any more runs and deGrom returned to the mound with just a one-run cushion.

DeGrom need just 11 pitches to get the Phillies out in the first. Maikel Franco doubled with two outs in the bottom of the second, but deGrom got Odubel Herrera to ground out for the third out.

After Arrieta got the Mets out in order in the top of the fourth, the sky opened, prompting a rain delay. DeGrom paced the dugout and asked pitching coach Dave Eiland how long the delay could go before his start would be in jeopardy. Eiland did not usually send starters back into a game if the delay was more than 45 minutes.

As deGrom stayed loose in the bullpen by playing catch, the storm passed through quickly. Play resumed after a 41-minute break. “I knew when the clock started,” deGrom said later.1 When he was told that the game would resume, deGrom ran to the mound to warm up before the umpires even took the field.

The Phillies’ Rhys Hoskins led off with a single when the game resumed. he stole second but got no farther and deGrom struck out Nick Williams to end the threat. The Phillies didn’t get another runner on base until the sixth, when Hoskins hit a two-out double to right field. Once again, he stayed put as deGrom struck out Carlos Santana for the third out. It was deGrom’s seventh strikeout of the game.

Arrieta left the game after the sixth and Luis Garcia took over the pitching duties. The Mets got two runs for deGrom in the top of the seventh. Devin Mesoraco hit his 10th home run of the season, a solo blast over the right-field wall. “We haven’t scored runs for him and haven’t performed at the plate to help and stretch the lead out and give him breathing room,” Mesoraco said later. “That definitely felt good.”2

With two outs, Amed Rosario singled. McNeil then stepped up and hit a triple to the deepest part of Citizens Bank Park to plate Rosario. DeGrom now had three runs to help him earn another victory.

DeGrom ran into trouble for the first time in the bottom of the frame. After Wilson Ramos grounded out to start the half-inning, Williams and Franco hit singles. Herrera followed with a grounder that should have been an inning-ending double play.

But after Flores threw to shortstop Rosario for the force out at second, Rosario’s throw to first got past deGrom. Herrera, safe at first, made a move to go to second and deGrom threw to second baseman McNeil, who made a heads-up play to cover first and nail the Phillies outfielder as he scrambled back to the bag. Herrera was initially ruled safe at first base but the call was overturned on a replay challenge by the Mets. The umpires said that Herrera had made the turn on the bag, which kept the ball in play.

Williams scored on the play. It was the only run deGrom would give up, and was unearned because of deGrom’s error at first. The Mets’ lead was cut to two runs but it was enough for deGrom.

DeGrom threw 99 pitches through eight innings and wouldn’t let his manager take him out of the game in the ninth. “We were optimistic the whole time that he’d be able to go out and finish. You do get worried, so we had that in the back of the mind but we checked with [him] and he seemed like he was in a good spot,” said Mets manager Mickey Callaway of his decision to allow deGrom to finish the game.3

“Definitely wanted it bad,” deGrom said. “Dave [Eiland] came up to me and asked, ‘What do you want to do?’ And I said, ‘I’m going out there.’ He was fine with it.”4 After deGrom surrendered a leadoff single to Santana in the ninth, he got Ramos to hit into a 6-4-3 double play.

When Williams stepped up to the plate with two outs, deGrom could see victory in his grasp. His first pitch to Williams was 98 mph. His next pitch, a fastball, was 99 miles per hour, the fastest pitch he had thrown in the game. The next and final pitch was also 99 mph, and Williams grounded to first for the final out.

“[DeGrom had a] lot of life on his fastball, and best slider of the year,” Mesoraco, his catcher, said after the game. “He had everything working. Very impressive.”5 Callaway was equally complimentary, saying: “I think it’s the same stuff we have seen all year. His ability to go out there and get ahead, attack them with his best stuff and when the game is on the line or a runner is in scoring position with a two-run lead he steps up and makes even better pitches.”6

It was the third complete-game victory of deGrom’s career, and was the only complete game he pitched in 2018. He threw his first complete game, a one-hitter, at Citizens Bank Park on July 17, 2016, in a 5-0 victory.

DeGrom’s record rose to 8-7 and his earned-run average dropped from 1.81 to 1.71. It remained the lowest in the major leagues. His performance burnished his already excellent credentials in the competition for the Cy Young Award. Asked after the game if he thought about the award, deGrom said, “Not when I’m out there. The goal is to get those guys out and fortunately I was able to do that.”7

DeGrom’s win came the day after his two closest competitors for the Cy Young Award had outstanding performances. Aaron Nola of the Phillies struck out 11 Mets as he pitched a one-hitter in the Phillies’ 4-2 defeat of the Mets. Nola’s record stood at 14-3 as a result of the win. The Nationals’ Max Scherzer pitched six shutout innings on the way to his 16th victory of the season and lowered his ERA to 2.11. He struck out seven Miami Marlins to raise his total to 233 for the season

Callaway said he felt that deGrom was still the front-runner for the award. “First and foremost, it’s the overall run prevention, the ability to keep guys from scoring which in return gives your team the best chance to win that night,” he said. “That’s the starter’s responsibility over everything else, over getting a strikeout here or there. If you look at all his peripheral numbers, they’re just better than everybody else’s.”8