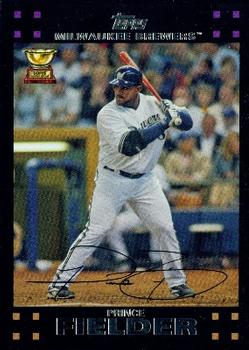 Both the Milwaukee Brewers and the Chicago Cubs had lost five straight games heading into a three-game series in Chicago starting on August 2, 2010. The Brewers had scored just eight runs in their five.1 Cubs manager Lou Piniella was in the midst of a four-game suspension for kicking dirt on an umpire, with bench coach Alan Trammell helming the team in his absence.

As a result, both the Brewers (49-58) and Cubs (46-60) had firmly dismissed any thoughts of the NL Central race from their fans’ minds, as the two clubs sat 11½ and 13 games back respectively. Despite the Cubs’ lower position, they had dominated the season series. They held a 6-3 record against the Brewers, outscoring them 62-35, including a 12-2 drubbing in Miller Park on April 25.

The Brewers sent first-time All-Star righty Yovani Gallardo to the mound with a 2.77 ERA and in pursuit of his 10th victory of the season. In his previous start, against the Reds, he went just 2⅔ innings, giving up six runs, the second such start in his last three attempts. Gallardo faced off against Cubs right-handed starter Randy Wells, who entered with a 5-8 record and a 4.10 ERA.

The two clubs traded scoreless frames for the first three innings of the game. In that span, Wells yielded a Corey Hart double and hit Gallardo with a pitch. Gallardo issued one walk while collecting six strikeouts, two in each inning.

Ryan Braun and Prince Fielder led off the fourth with back-to-back singles. With runners on first and second, former Cub Casey McGehee drove a 1-and-0 pitch over the center-field wall for the game’s only home run, opening the scoring at 3-0, Brewers.

Jim Edmonds and Alcides Escobar also singled before rookie catcher Jonathan Lucroy made it six hits in a row, loading the bases. Gallardo struck out looking but Rickie Weeks hit a double to left-center that trickled all the way to the wall, scoring two runs. 5-0, Milwaukee.

In the bottom of the fourth, rookie shortstop Starlin Castro doubled, went to third on a lineout, and scored on Aramis Ramirez’s grounder to shortstop. It was, 5-1 Milwaukee. Gallardo picked up his seventh strikeout.

Wells returned to the mound in the fifth and Fielder poked another single through the shift, this time down the third-base line. McGehee bounced a single to center field for the Brewers’ 10th hit of the game, and Justin Berg came in for Wells. This was Wells’ fourth game of the season allowing 10 hits, the first without completing five innings.

Berg issued a nine-pitch walk to Edmonds, loading the bases and setting up a station-to-station single for Escobar. Fielder scored; 6-1, Brewers. With one out, Gallardo bounced to the third baseman Ramirez, but a low throw to the plate allowed McGehee to score and kept the bases loaded. Castro made an amazing play to catch Gallardo at second on a fielder’s choice, scoring Edmonds: 8-1. Hart then laced an RBI single to center to make it 9-1. Braun poked a single into center, scoring Weeks from second, making it 10-1, and drawing an exasperated sigh from Cubs commentator Bob Brenly: “Boy this is just atrocious.”2

The Brewers had batted around in consecutive innings, scoring five runs in each. The Cubs led the league with 64 unearned runs heading into this game. They added four more in the fifth inning.

Casey Coleman, the Cubs’ 2009 minor-league pitcher of the year, entered the sixth in relief of Berg. The Colemans became the fourth family with grandfather (Joe Coleman), father (Joe Coleman Jr.), and son all reaching the major leagues. Casey was the first-ever third-generation major-league pitcher. Coincidentally Casey debuted against Casey, as McGehee took a four-pitch walk to lead off the inning.

Edmonds grounded a ball into center field for his second hit, and Carlos Gomez pinch-ran to give the veteran the rest of the night off. Escobar recorded his third hit of the night on the first pitch of his at-bat, scoring McGehee easily from second. The Brewers led 11-1. Lucroy grounded into a 6-4-3 double play, and Gallardo struck out swinging for Coleman’s first career strikeout.

Gallardo struck out the side in the bottom of the sixth, working around Castro’s second double. His 12 strikeouts tied a career high, his sixth of seven double-digit strikeout performances in 2010, part of the second of his four straight 200-strikeout seasons.

Weeks led off the seventh with a groundout for Coleman’s fourth consecutive out. Any thoughts of stability were quickly dispelled, as Hart, Braun, and Fielder each singled for their third hits of the game. Fielder’s single scored Hart from second. McGehee’s fly to deep right scored Braun to make it 13-1. Gomez was hit by a pitch and Escobar walked, but Coleman got out of a bases-loaded jam on Lucroy’s groundout.

LaTroy Hawkins entered the game for the Brewers in the seventh, his second appearance since a 2½-month stint on the disabled list with right shoulder weakness.3 It was a rough season for Hawkins, who was pitching in his 15th of 18 games in the season. Entering this matchup, Hawkins had an 8.53 ERA, and he had coughed up five runs in just three innings against the Cubs.

Hawkins continued the Cubs’ beating this day, though. Although Alfonso Soriano laced the Cubs’ third double of the day, to right field, Hawkins struck out two in a scoreless inning.

Craig Counsell, less than three weeks from his 39th birthday, beat out an infield single to lead off the eighth inning pinch-hitting for Hawkins. Counsell was then out at second on Weeks’ groundball to shortstop. Hart got the Brewers’ 20th hit of the game, a single to right field.

The Cubs broadcast team, disinterested in the game, began playing the Chicken Dance over the broadcast during Ryan Braun’s eighth inning at-bat. They were poking fun at his tendency to flare his elbows out as part of his batting routine. Braun loaded the bases with a single, chasing Casey Coleman from the game. Coleman threw 63 pitches in 2⅓ innings, allowing eight hits, and yielded to Brian Schlitter. Schlitter’s third pitch was pounded by Fielder for a bases-clearing double: 16-1, Brewers. Hart, Braun, and Fielder collected consecutive hits for the second consecutive time, their fourth hits.

Schlitter dealt Carlos Gomez his second hit-by-pitch of the game. This one hurt a great deal more than the one in the first, hitting his batting helmet with a resounding bang. Gomez eventually walked off the field, with starting pitcher Dave Bush replacing him at first.

Escobar flied out to end the inning, before moving to center for the first time in his career to replace Gomez, with Counsell taking over at shortstop. Future Hall of Famer and, at the time, career saves leader Trevor Hoffman entered to pitch the eighth for the Brewers. Hoffman was truly struggling for the first extended period in his career and had yielded the closer’s role to John Axford early in the season. He came into the game with a 6.82 ERA, stuck on 596 career saves.

Escobar handled his chances in center well, including an athletic catch to give Hoffman a scoreless inning in spite of Tyler Colvin’s two-out double.

Counsell grounded his second hit of the game through the infield, the seventh Brewer with multiple hits. Joe Inglett pinch-hit for Rickie Weeks, collecting a single. Hart grounded into a fielder’s choice, but Braun and Fielder collected back-to-back hits for the third time. Each was an RBI single, and the fifth hit of the game for each player. Braun and Fielder respectively became the 33rd and 34th Brewers to reach five hits in a game, and the third pair to do so, the last being Scott Fletcher and Kevin Seitzer in 1992 against the Blue Jays.4 Fielder’s hit was the 26th allowed by the Cubs, a mark coincidentally achieved by another visiting National League team from Milwaukee some 50 years earlier, as the Braves scored 23 runs on 26 hits in Wrigley on September 2, 1957.5 18-1, Brewers.

McGehee reached on an error by shortstop Castro, but Hoffman struck out to end the inning in his 34th and final career at-bat.

John Axford got three fly balls in the ninth to end the game. In the final six innings, the Brewers scored 18 runs on 25 hits, against just 18 outs recorded.

“It’s weird, to be honest with you,” Braun told the Associated Press. “It’s not something that happens very often, if ever.”6

The Cubs totaled four hits. Starlin Castro had two of them. The Brewers, on the other hand, collected six straight hits in the top of the fourth. Jim Edmonds, who went 2-for-3 with two runs scored, played just five more games with the Brewers before being traded to Cincinnati, where he played just 13 more games in his career.

In addition to the sources cited in the Notes, the author consulted Baseball-Reference.com, Retrosheet.org, and a WGN broadcast of the game found on YouTube.