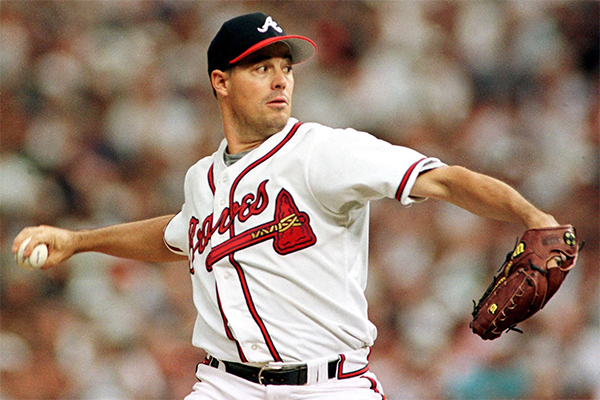 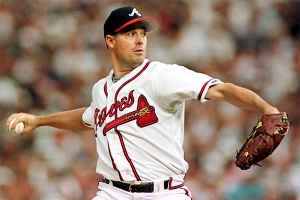 On a warm Sunday August evening,1 the hot first-place Atlanta Braves (66-39) were visiting the last-place St. Louis Cardinals (42-63)2 in the final game of a three-game series that pitted two close friends as mound opponents. The strike-delayed start to the 1995 season meant that each team had played only 105 games to this point and each had fewer than 40 games left to play in the season.

A crowd of 24,613 turned out at Busch Stadium to see their beloved Cardinals, sporting what many considered the worst offense in baseball, take on the game’s stingiest pitcher, Greg Maddux. Before this series, the Cardinals had lost 16 of 19 games, dating back to July 27. In that stretch, they had scored more than four runs only twice, and they had been shut out four times. Atlanta had fared much better, winning 11 of 15 contests before visiting Busch Stadium, and although they weren’t scoring many runs, their pitching was holding opponents to even fewer tallies. Braves skipper Bobby Cox handed the ball to Maddux (12-2) to try to win the third game and stop the mini-skid. Maddux “had extra incentive as he took the mound.”3 In what could be termed bragging rights, he was facing his boyhood friend and Las Vegas neighbor,4 Cardinals starter Mike Morgan (4-6).

Maddux was hands-down the best pitcher in baseball. The ace of the Atlanta staff, he had won the last three Cy Young Awards in the National League. However, the right-hander had not pitched in 10 days, having missed his last start in Atlanta with a bad case of the flu. Morgan, on the other hand, was not having a great year. He had started the season with the Chicago Cubs, and came to St. Louis with minor leaguers Paul Torres and Francisco Morales in a June 16 trade for Todd Zeile and cash. Coming into this game, Morgan had lost his last three starts.

Maddux faced his toughest batter when Bernard Gilkey led off the bottom of the first. Gilkey worked a full count and fouled off a few more before flying out to right on the eighth pitch of the at-bat. Maddux then threw just three more pitches to retire both Ozzie Smith and John Mabry.

Morgan had allowed a two-out single to Chipper Jones in the first and then a single to Charlie O’Brien and a walk to Mark Lemke in the second, before working out of the jam. The Braves broke onto the scoreboard in the top of the third. Marquis Grissom led off with a double and went to third base on Jeff Blauser’s sacrifice bunt. Jones came through with an RBI groundout to second, bringing Grissom home. In the fourth, Morgan gave up back-to-back singles to David Justice and Ryan Klesko to start the frame, but two grounders led to a double play and the third out, and the score remained 1-0 in favor of Atlanta.

No St. Louis batter reached until Maddux allowed a leadoff single up the middle to Brian Jordan to start the bottom of the fifth. Jordan stole second base, but Maddux stranded him there, striking out Ray Lankford and getting David Bell and Scott Cooper. A leadoff double by Danny Sheaffer opened the bottom of the sixth, but Maddux turned him into an LOB statistic by retiring the next three Cardinals hitters. He had thrown 64 pitches through the first six innings.

Morgan and Maddux sent opposing batters back to the respective dugouts. According to the Atlanta Constitution, “The Braves needed a shutout, considering how they were shut down by Cardinals right-hander Mike Morgan.”5 Despite a rocky start, Morgan faced the minimum in the fifth, seventh, and eighth innings. Maddux finished the game stronger than how he began. He sent the first 12 batters he faced back to the dugout, “as well as the last dozen.”6

Tony Fossas relieved Morgan to pitch the ninth and Fred McGriff greeted him with a double to center. Justice then launched a fly to deep left for the first out. McGriff tried to advance after the catch, but Gilkey threw a strike to Cooper at third, who tagged out the sliding McGriff for a double play. Klesko grounded out and the Cardinals were down to their last inning. It took Maddux just seven pitches (the third such inning in which he economically used only seven pitches) to get his three foes, and the game was over. Atlanta had prevailed, 1-0.

Morgan got 18 groundball outs in his eight innings of work. When asked after the game about his competition with Maddux, Morgan kept it all in perspective. “I wasn’t pitching against Maddux, I was pitching against the Atlanta Braves. I kept my club in the game and gave us a chance to win. I did my job. That’s the best I can do.”7 Cardinals interim manager Mike Jorgensen praised his starter, Morgan, saying, “Gutsy performance all the way. He did a heck of a job, just got bested by a little bit.”8 The Cardinals suffered their 15th shutout of the season. The next day, Cincinnati came to St. Louis and the Cardinals won in walk-off fashion, starting a stretch in which they won six of seven games, rising out of the bottom of the standings. Another six-game win streak in September put them in fourth place to stay.

After the game, Maddux told reporters, “That is as good as I can pitch. It’s nice to be able to say that. Usually there’s something that could have been better.”9 Only two Cardinals batters had full counts. Regarding his missed start, Maddux said, “I think the time off did me a lot of good. I felt strong. I felt like spring training.”10 Cox’s Braves used Maddux’s victory as confidence to reel off six more victories, but although they had won seven in a row, they gained only a game and a half in the standings. A strong September helped the Braves finish the season with a record of 90-54.

Jorgensen had praise for Maddux, too, saying, “When he gets in a jam, he pitches better, which is unbelievable.”11 He added, “He’s a master, he puts every pitch almost exactly where he wants to. That’s one tough guy to go up against.”12

The 1-hour, 50-minute game was the shortest in the majors to this point of the season. In earning his 13th victory of the year, Maddux threw just 88 pitches, 66 for strikes. Maddux tied Cincinnati Reds hurler Pete Schourek for the NL lead in victories. Since May 23, Maddux was 11-1 with a 1.53 earned-run average. More amazingly, in his last 16 road starts (dating back to the 1994 season), Maddux’s record was 15-0 with a sub-one (0.96) ERA.

Maddux made such quick work of the Cardinals that the team had to wait in the locker room before heading out of St. Louis. According to the Springfield News-Leader, “the Atlanta Braves’ team plane was in another city when (Maddux) got the last out.”13 The plane had been delayed by thunderstorms in Atlanta.

Maddux had seven more starts in the 1995 season. He went 6-0, raising his record to 19-2 and lowering his earned-run average to 1.63, the best in baseball. His 19 wins (and .905 winning percentage) were also tops in baseball,14 and his 209⅔ innings pitched, 10 complete games, and three shutouts led the senior circuit.15 He was rewarded at the end of the season by a unanimous selection for his fourth consecutive Cy Young Award. (He received all 28 first-place votes.) Schourek finished a distant second in the voting for the league’s best pitcher.

1 The game-time temperature was 87 degrees Fahrenheit.

2 Atlanta was in the National League East Division, while St. Louis was in the NL Central Division.