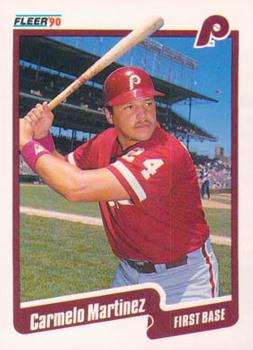 Entering the second game of a three-game series on August 21, 1990, the Phillies (57-62) were not playing well at Dodger Stadium. They had lost 12 of their 15 previous contests at Chavez Ravine, dating back to May 14, 1988.1 This included a 2-1, walk-off loss on August 20 when Mike Sharperson hit a one-out, ninth-inning home run off starting pitcher Terry Mulholland.

Phillies rookie Jason Grimsley (0-0) was making his third start of the season (seventh in his major-league career) and first against the Dodgers (63-58). LA rookie Mike Hartley (4-1) was making his second major-league start after starting his career with 31 straight relief appearances.2 Hartley was making a spot start in place of the injured Tim Belcher.3

The Phillies opened the scoring in the second. Tommy Herr walked with one out. He stole second as Carmelo Martinez struck out swinging and took third on catcher Mike Scioscia’s throwing error. Dickie Thon’s two-out, two-strike groundball single to left scored Herr. The Dodgers quickly tied it. Scioscia led off the bottom of the inning with a line-drive single to center and went to third on Sharperson’s line-drive single to left, and scored on Alfredo Griffin’s double-play grounder to second.

Grimsley was replaced by Bruce Ruffin after allowing three runs on six hits and three walks in three innings in 72 pitches.

Ruffin struck out Gibson swinging to lead off the fifth, but Darren Daulton’s passed ball allowed Gibson to reach first. Daniels’s line-drive single to center advanced Gibson to second. A walk to Murray loaded the bases. On third baseman Charlie Hayes’s error on Brooks’s groundball, Gibson scored, and Scioscia’s line-drive ground-rule double to left-center plated Daniels and Murray and sent Brooks to third. Ruffin was replaced by Darrel Akerfelds after failing to retire a batter in the inning. Sharperson, the first batter Akerfelds faced, hit a groundball to Thon, who “made an unwise throw home when he should have gone to first.”4 Thon’s throw to the plate was late, and Brooks scored.5 Griffin’s groundball single to right scored Scioscia.6 Pitcher Hartley’s bunt to the left side was dropped by Akerfelds.7 The bases were loaded for the second time. Akerfelds, who failed to retire all three batters he faced, was replaced by Dennis Cook. Harris’s fly-ball single to short center scored Sharperson and Griffin, and a similar single by Gibson loaded the bases for the third time. Pinch-hitter Stan Javier’s groundout to Hayes scored Hartley. Ten straight batters had reached before Javier’s at-bat. Cook got the side out, but the Dodgers had sent up 14 batters and scored eight runs (five earned) on five hits, two errors, and a passed ball. They led 11-1 after five.8

Dodgers manager Tom Lasorda began to empty his bench. Javier remained in the game in left field. Mickey Hatcher replaced Murray at first. Hartley retired the Phillies in order in the sixth for the third straight inning.9 “The most pressure I’ve ever been in was a playoff game in the minor leagues,” Hartley said. “But I enjoy it. This is the most fun I’ve ever had.”10 Lasorda pinch-hit rookie Jose Offerman for Hartley; Offerman flied out to right. Juan Samuel pinch-hit for Harris, striking out to end the sixth.

Don Aase started the seventh in relief for the Dodgers. Rick Dempsey replaced Scioscia at catcher. Jose Gonzalez replaced Gibson in center. Chris Gwynn replaced Brooks in right. Offerman remained in the game, playing shortstop. Samuel remained in the game, playing second. “Tommy started to take his starters out and then I began to take mine out,” Phillies manager Nick Leyva said. “With the score 11-1 you want to think about tomorrow.”11

The Phillies closed the deficit to 11-3 in the eighth. Rookie Dave Hollins, pinch-hitting for Joe Boever, led off with a line-drive single to left. Lenny Dykstra lined another single to left, advancing Hollins to third.12 Daulton fouled out to Sharperson. Von Hayes’s one-out, two-strike groundball double to right scored Hollins and Dykstra.

Rookie pitcher Dave Walsh started the ninth for the Dodgers.13 Rod Booker, who replaced Herr at second in the seventh, led off with a walk. Martinez hit a potential double-play grounder to shortstop, but Offerman kicked the ball and the Phillies had runners on first and third.

Thon’s line single to left scored Booker and sent Martinez to third. Hollins’s ground single to center scored Martinez. Thon moved to second. Campusano flied out to right. Nieto’s walk loaded the bases. Von Hayes’s groundball to Offerman went off his glove for his second error of the inning, allowing Thon to score.14

Walsh was replaced by Tim Crews with the score 11-6, one out and the bases loaded. Dale Murphy lined a double to left, scoring Hollins and Nieto, and sending Von Hayes to third. “That,” Leyva said, “is when I first thought we had a chance.”15 John Kruk, batting for pitcher McDowell, represented the tying run. “I had seen the way things were going,” he said after the game. “So even though I was still four or five at-bats away when we were getting closer, I was getting ready to hit.”16 Kruk added, “You don’t think about coming back and winning that game. When I came up, I looked at the scoreboard because I couldn’t keep track.”17 He hit Crews’s 2-and-0 pitch into the right-center-field seats to tie the game.18 “Luck, that’s what it was,” he said. “I’m not a home-run hitter, so that’s what it must be.”19 Booker, batting for the second time in the inning, reached on a groundball single to center. Crews was replaced by Jay Howell, the third Dodgers pitcher of the inning.20 “I screwed up the game,” said Crews, who gave up three runs and three hits and failed to retire a batter. “I can’t give an explanation for it. All I know is, for my part, I didn’t get the job done.”21 Booker hit a ground-ball single to center and stole his second base of the season with Martinez at the plate. Martinez’s fly-ball double to left-center on a 1-and-1 pitch scored Booker with the tiebreaking run.22 Altogether, the Phillies sent 14 hitters to bat, scoring nine runs (four earned) on six hits, and two Offerman errors.

The Phillies’ nine runs equaled a season high; they had scored nine in an inning against Houston on July 14.23 They were also the most runs the Phillies had scored in the ninth inning since July 6, 1918, against Cincinnati.24 Their nine tallies were three short of the modern-day NL record of 12 by the 1961 San Francisco Giants.25

Don Carman started the ninth for the Phillies and Kruk replaced Martinez at first.26 Carman made quick work of the Dodgers: Gonzalez fouled out to first, Javier hit a groundball single to left, Hatcher flied out to right, and Gwynn forced Javier at second to end the game. McDowell (5-6) won the game in relief.27 Carman got credit for his first save of the season.28

“I’m shocked. … I’m just shocked,” Dodgers manager Tom Lasorda said. “I just don’t believe it. I mean, we had them 11 to 1. Just to lose the game in itself is terrible.”29 He added: “I’ve never seen anything like this. It was the first time in my managerial career that something like this has happened.”30

“I’ve never seen anything like it,” Phillies manager Nick Leyva said. ‘I’ve never even heard of it.

Kruk said: “Let’s be honest. We’re losing by eight runs (11-3), and all I’m thinking about at that point is getting back to the hotel by midnight because that’s when room service closes. All of a sudden we start getting hits, and I’m saying, ‘I’m not going to make it.’ If you’re not going to get room service, you might as well win.”32

In addition to the sources cited in the Notes, the author referred to Baseball-Reference.com, and Retrosheet.org for box scores, play-by-plays, and other pertinent information.

2 Hartley made four relief appearances against the Phillies in 1990, allowing two runs (both earned) in four innings.

8 This was the most runs the Dodgers scored in an inning since they scored nine in the first inning in St. Louis against the Cardinals on May 27, 1990.

9 Hartley retired the last 11 batters he faced and threw 90 pitches for the game. He made four more starts in 1990, posting a 2.52 ERA in 35⅔ innings pitched as a starter for the season. Hartley also limited opponents to the triple-slash line of .171/.250/.252 as a starter, but would not make any more major-league starts. After the 1990 season, all his 165 appearances were in relief.

13 Walsh was making his fifth major-league appearance. He twice previously finished games in losses (August 14, game one; and August 16). This was the first time he started the ninth inning in his major-league career.

22 This would be Martinez’s last RBI as a Phillie. He played in four more games for the Phillies before being traded to the Pittsburgh Pirates on August 30 for outfielders Wes Chamberlain, Julio Peguero, and a player to be named later (outfielder Tony Longmire).

27 McDowell and Carman shared the team lead with six relief wins each in 1990.

28 Carman’s save was the last in his Phillies career.