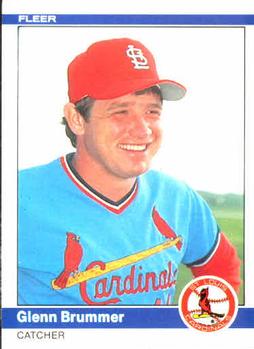 There was no reason to expect St. Louis Cardinals catcher Glenn Brummer to play a significant role in the team’s Sunday afternoon game against the San Francisco Giants on August 22, 1982. Though manager Whitey Herzog called Brummer “the best third-string catcher I’ve ever seen,”1 that was more a reference to his willingness to work with pitchers than his prowess on the field

After two early season appearances, Brummer went down to Triple-A Louisville April 23 and managed to hit only .107 as the backup catcher. Still, when starter Darrell Porter fractured his finger on May 14, Brummer rejoined the Cardinals. When Porter returned, Brummer didn’t go back to Louisville, but did go back to the bench. He had only one plate appearance, a July 16 single off Tom Hume, between June 19 and August 22. In the month prior to August 22, Brummer spent only two innings behind the plate and made one appearance as a pinch-runner.

Stealing was not unheard of for Brummer, but he was hardly a prodigious basestealer. He had stolen 34 bases in eight minor-league seasons and stole his first major-league base on June 4. Yet the game ended with Brummer sliding across home plate and leaping into his teammates’ arms, an indelible image in the Cardinals’ world championship year.

Both teams entered the day playing some of their best baseball of the season. San Francisco had won 14 of its last 20 games, including a 10-game winning streak, cutting its deficit in the National League West from 13 games to five. The Cardinals had won nine of their last 12, a surge that put them two games ahead of Philadelphia in the National League East.

Joaquín Andújar (9-10, 2.78 ERA), the starting pitcher for the Cardinals, had faced the Giants twice in 1982 and shut them out both times. He looked just as strong at the outset of the game, blanking the Giants for the first five innings.

The Cardinals had more success against Giants starter Atlee Hammaker (8-7. 4.41 ERA). George Hendrick was the first Cardinal to get to him, leading off the second inning with a double. Gene Tenace followed with a double and the Cardinals took a 1-0 lead.

Hendrick collected a one-out single in his next at-bat. Though Tenace struck out behind him, the Cardinals’ lead grew when Willie McGee followed with the second home run of his career, staking the Cardinals to a three-run lead after four innings.

Andújar’s dominance of the Giants came to an abrupt halt in the top of the sixth. With one out, Joe Morgan doubled. He moved to third on a single by Chili Davis, which gave the Giants their first multi-hit inning of the game. Davis stole second, which paid off when Jack Clark doubled both runners home to make the score 3-2. Darrell Evans’ single plated Clark with the tying run and Dave Bergman continued the onslaught with a base hit to left.

That was the end of Andújar’s outing, but not of the Giants’ scoring. John Martin replaced Andújar and got catcher Milt May to ground into a fielder’s choice. That grounder, however, scored Evans and gave the Giants a 4-3 lead. Joe Pettini added a two-out single, but the inning came to a merciful end for the Cardinals when Hammaker grounded out to first.

The Cardinals failed to capitalize on Lonnie Smith’s leadoff double in the sixth inning and Mike Ramsey’s leadoff single (his first hit since July 25) in the seventh inning. In the top of the eighth, the game’s first controversy emerged.

Clark, the Giants’ right fielder, struck out to lead off the inning and his protest earned him an ejection from home-plate umpire Dave Pallone. Giants manager Frank Robinson did not announce his new right fielder until the inning ended, when he made a double switch, putting a new pitcher in Clark’s fourth spot in the order and the replacement right fielder in the ninth spot, which was due up in the top of the ninth inning. Herzog felt this was illegal and protested the game.

“Technically, it teed me off,” Herzog said. “Once he kicked Clark out, he’s got to replace him immediately because he’s still got the pitcher in the ninth hole.”2

In the bottom of the inning, another seldom used Cardinal, Steve Braun, collected a pinch-hit single, his first hit since July 19. Not known for his speed, Braun was lifted for a pinch-runner:  Glenn Brummer. Brummer advanced to second on a single by McGee, but remained there. The Cardinals went into the ninth inning still down a run and facing the Giants’ closer, Greg Minton.

The Cardinals’ situation did not improve when Ozzie Smith led off with a strikeout. Minton hit David Green, who stole second. Tommy Herr’s groundout moved Green to third, but also brought the Cardinals to their final out, with the pitcher’s slot due up.

Herzog called on Ken Oberkfell, the Cardinals’ regular third baseman, to pinch-hit for Doug Bair. With the count at 1-and-1, Oberkfell smacked a double to right center, scoring Green to send the game to extra innings.

Before Brummer became the hero of the game, he very nearly was the goat. Max Venable led off the 10th inning for the Giants with a double. The next batter, Morgan, popped a foul ball between third base and home plate. Making a perhaps overly aggressive play, Brummer collided with the third baseman and the ball fell to the ground untouched. Fortunately for Brummer, Morgan struck out, keeping the error from being a game-changing moment.

Brummer made his first plate appearance of the game in the bottom of the 10th, striking out to lead off the inning. Although the Cardinals put a man on second in the inning, and the Giants did the same in the top of the 11th, neither team scored.

The Cardinals also failed to plate a run in the bottom of the 11th despite having a runner on third with one out. This was due partially to their depleted bench, which forced Herzog to let rookie reliever Jeff Lahti bat for himself.

Though he failed at the plate, Lahti redeemed himself by retiring the Giants in order in the top of the 12th inning. This gave the Cardinals another crack at Gary Lavelle, who had pitched the entirety of the extra frames for the Giants.

Hendrick led off the inning with a fly out, but Brummer followed with a single to left field. Willie McGee’s fourth hit of the game moved Brummer to second. With two out, Ozzie Smith chopped an infield single to Lavelle, loading the bases for Green. As Lavelle worked on Green, Brummer noticed that the pitcher was paying him no attention.

“On his first two pitches I edged up maybe 30 or 40 feet down the base line. Each time I was almost halfway down when he began his windup, and I began to think maybe I had a chance to go in.”3

Brummer mentioned his observation to his third-base coach, looking for the green light to run.

With the count at 1-and-2, Brummer took everyone in the ballpark by surprise as he broke for home. With Brummer charging down the line, Green stepped out of the batter’s box, Pallone moved out from behind the catcher May, and May stepped in front of the plate to receive the ball and tag Brummer.

Brummer was safe. As his teammates dashed on to the field to celebrate, however, the Giants were livid. They claimed that Pallone never called the pitch a ball or a strike. Had the pitch been strike three, the inning would have been over and Brummer’s dash would have been for naught.

After the game, Pallone said, “As far as I could see, the pitch was out of the strike zone. If I felt like the pitch was a strike, then the inning would have been over.”6

When pressed on the exact location of the pitch, however, Pallone could only offer, “I don’t recall. It was somewhere out of the strike zone.”7

“He’s a liar; he’s incompetent,” Robinson said. “He told me he called it a ball, but he’s a liar. He called nothing. He wasn’t even behind the plate. It was strike three.”8

Regardless of the arguments, the steal of home stood. Brummer had gone from a guy who hadn’t swung a bat in over a month to a hero in the midst of a pennant race. He’d also managed to bring a 4-hour, 1-minute game to an unforgettable conclusion.