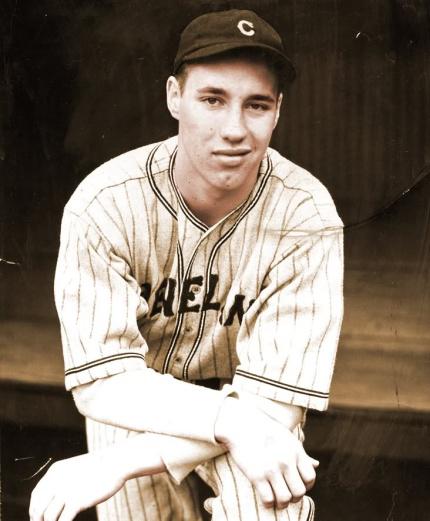 We may have all been there at one time or another. You begin the school year and the English teacher’s first assignment is for you to write a composition: “What I did this summer?” No doubt the subject of most of the papers submitted center on a family vacation, a summer job or perhaps something even more mundane.

But for Bob Feller in 1936, he could have written about being a rookie pitcher for the Cleveland Indians. Imagine the instructor’s surprise at the originality of such a piece. The 17-year-old right-hander from Van Meter, Iowa (or as the Cleveland Plain Dealer described it “the tall corn state”), was enjoying the summer between his junior and senior years of high school. He had made his unofficial debut in an exhibition game against the St. Louis Cardinals on July 6, 1936. Cleveland manager Steve O’Neill inserted the teenager for three innings of relief and Feller responded by striking out eight Cardinals. “The kid’s a natural,” said Dizzy Dean. “He’s got everything. He can’t miss.”1

It was quite an endorsement from one of the great pitchers of all-time. Feller had come to Cleveland to pitch semipro for the Rosenblums. He was put to work in his spare time selling peanuts at League Park. But Indians general manager Cy Slapnicka was so impressed with the youngsters fastball that he was promoted from vendor to a spot on Cleveland’s pitching staff.

At Slapnicka’s request, O’Neill gave Feller his first start on August 23 against the St. Louis Browns at League Park. The Browns were a good choice, as they were playing their role as American League patsies to their usual form. They were a full 34 games behind first-place New York and only the Philadelphia Athletics could break their fall to the basement.

Earl Caldwell was given the starting assignment by Browns manager Rogers Hornsby. Caldwell was thus far having a dismal season (5-10, 6.29 ERA). However, one of his wins was a shutout of the Indians at Sportsman’s Park the week before.

The Indians were in second place, but they were a distant 12 games behind the New York Yankees. O’Neill had been using Feller sporadically, inserting him as a reliever in six games since July and mid-August. In eight innings he had surrendered 11 hits, eight walks, and seven earned runs. Of course, who could blame the young hurler if he was having trouble early on? Perhaps fearing that a repeat performance was in the offing on this day, O’Neill had Denny Galehouse warming up in the bullpen in the first inning.

Feller started the game by whiffing St. Louis shortstop Lyn Lary. After Harlond Clift singled, Feller struck out Moose Solters and Beau Bell. The teenager, who never threw a pitch in the minor leagues,had struck out the side. Galehouse ceased his warm-up tosses and he found a seat in the bullpen.

The kid was superb. He was racking up the strikeouts at a record pace. Perhaps his only flaw was issuing the free pass. In the third inning with one out, Feller walked Lary and Clift. But once again he fanned Solters, and catcher Charles “Greek” George threw out Lary trying to steal third.

Meanwhile Caldwell was equal to the task. Although he was not ringing up the strikeouts like his young counterpart, he hurled well enough to keep the Indians scoreless. Feller struck out the side in the fifth inning to bring his strikeout total to 10.

In the top of the sixth the Browns broke through with the first tally of the game. Lary doubled to left field and scored when Bell doubled off the wall in right field. The 1-0 advantage was short-lived. In the bottom of the inning Caldwell walked Odell Hale and Earl Averill. Hal Trosky sent a double to center field to score Hale and send Averill to third base. Roy Weatherly was intentionally walked and the bases were loaded. Joe Vosmik stepped to the plate and sent a single through the box to plate two more and give the Tribe a 3-1 lead.

The reported attendance was 10,000 fans (the St. Louis Post-Dispatch wrote that the attendance was closer to 8,500). No doubt they were curious to see how the teen phenom would do in his initial start. They most assuredly were impressed with not only the velocity of his pitches, but the acumen he showed. In both the seventh and eighth innings, St. Louis put two men on, but Feller was able to shut them down. Lary struck for the second time to end the Browns’ seventh, and Jim Bottomley’s long fly out to left field stifled the rally in the eighth.

In the bottom of the seventh Trosky singled home his second run to increase the Indians’ lead to 4-1. Feller had no strikeouts in the eighth, but the game ended just as it started. He struck out Lary for the final out. Only Clift of the starters did not join the Browns strikeout parade. Feller struck out 15 batters, one shy of the American League record of 16 set by Philadelphia’s Rube Waddell in 1908. Dizzy Dean owned the high mark in the National League with 17 in 1933. “I knew Dizzy Dean had the record, but I didn’t know the American League mark was 16,” said Feller. “It wouldn’t have made any difference because I gave all I had.”2

Asked if he had been nervous, Feller said: “Well, I did worry when those flies went out to right field. From where I stood, I couldn’t judge ’em so well and I was afraid they might go over the wall. I was afraid that my arm would tire along about the sixth or seventh inning, but it held up fine.”3

Brooklyn Dodgers pitcher Van Mungo,who at the moment led the major leagues in strikeouts, was impressed by the schoolboy’s achievement. “The kid must be a hell of a pitcher,” said Mungo. “That showing was just a tip-off. You’ve got to be a good pitcher to strikeout 15 major league batters in one game – whether you’re 17 years old or 27.”4

Feller faced the Browns again on September 7 at League Park. To show that his previous effort was no fluke, he struck out 10 batters on his way to a 7-1 victory. However, the Indians dropped to fifth place at season’s end, while the Browns clung to their spot in seventh place, 44½ games behind New York.