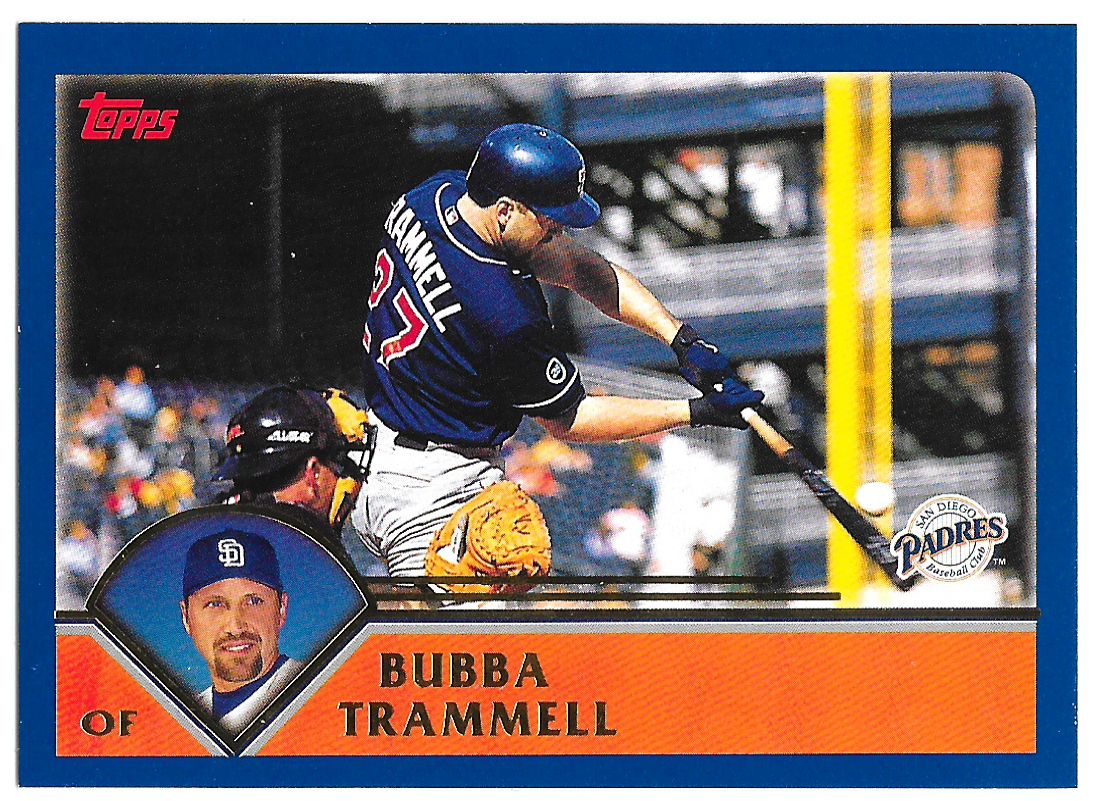 It was a pleasant Friday evening in San Diego. The 21,964 fans in attendance could hope for a competitive match: Although the San Diego Padres (54-73) were in last place in the NL West, the visiting Florida Marlins (61-66) were in fourth place in their NL East division. The last winning year for the Padres was 1998, when they won the National League pennant; the Marlins’ last winning season was 1997, when they won the World Series.

Rookie Jake Peavy (4-5, 5.34 ERA) took the hill for the Padres. He allowed an opening double to Luis Castillo, followed by a run-scoring single to Andy Fox. Six pitches in and the Marlins were up 1-0. But Peavy limited the damage: He got Kevin Millar to fly out, Preston Wilson to ground out, and Derrek Lee to strike out.

Carl Pavano was making his first start since being traded to the Marlins by the Expos on July 11, although he had made 14 appearances in relief. Between his starts for the Expos and a loss charged in his first Marlins relief appearance, he had accumulated a 3-9 record with a 5.59 ERA. His first inning was efficient: He allowed only a single to Ryan Klesko on 18 pitches.

Peavy’s second inning was even more efficient: although Juan Encarnación singled, he was erased when Mike Lowell grounded into a double play. Charles Johnson lined out on the first pitch to complete a 10-pitch inning.

The Padres got on the board in the bottom of the second. Ron Gant singled, then Bubba Trammell homered to bring the score to 2-1, Padres. But that was all they got: Deivi Cruz, Tom Lampkin, and Peavy were out quickly on four pitches.

The top of the third was over just as fast: Peavy had a 1-2-3 inning. Pavano ran into trouble in his half of the third inning. He got one quick out: Ramón Vázquez grounded out. Then Gene Kingsale singled. With Klesko batting, Kingsale stole second. He could as well have stayed put: Klesko walked. Phil Nevin singled, scoring Kingsale. Gant struck out but that was only the second out. With runners on first and second, the stage was set for a rare play – a “Little League home run.”1 Trammell started the proceedings by hitting a groundball that went under third baseman Lowell’s glove. Left fielder Millar tried to help but the ball rolled under his glove, too, all the way to the wall. By the time Millar had corralled the ball, Trammel was rounding third. Millar’s throw to Lowell was on target and Lowell’s throw to catcher Johnson was in time, but Johnson couldn’t handle the throw: all three runners scored. Lowell and Millar were both charged with errors so the three runs were unearned. Pavano finally ended the inning by getting Cruz to ground out with the score 6-1, Padres.

Peavy had an uneventful top of the fourth: Although he allowed a double to Lee, he struck out Encarnación to end the half-inning.

Perhaps Pavano was rattled by the “ugly”2 fielding behind him, or perhaps he was fatigued (this was his first start since June 15, when he lasted only into the fourth inning. Whatever the reason, Pavano started the inning by walking Lampkin, who was erased when Peavy grounded to second. After Vázquez singled and Kingsale walked to load the bases, Marlins manager Jeff Torborg decided that was enough and called on Vic Darensbourg in relief. Unfortunately for him, the ugly fielding continued: Klesko worked the count full, then reached on first baseman Lee’s ninth error of the season. That also scored two runs; again, unearned. A Nevin popout and a Gant groundout ended the inning with the score 8-1, Padres.

The Marlins got one run back in their half of the fifth inning on a two-out single by Castillo, scoring Lowell.

If the Marlins’ pitching had wobbled in the third and fourth innings, the wheels came completely off the wagon in the fifth. The Padres circled the bases at a rate exceeded only by the team in the Bugs Bunny video.3 A play-by-play would be overwhelming: a summary will suffice.

Nine runs were scored on 10 hits (a Marlins record for runs allowed in an inning).4

Eleven consecutive men came to bat with the bases loaded: no hit or walk scored more than one run.

Nine singles (six were run-scoring), two walks (both run-scoring), and only one home run (Trammell’s second of the game – third, if you count his “Little League” homer in the third inning).

Trammell, Cruz, and Lampkin each had two hits in the inning.

When the inning finally ended with Kingsale’s fly out to right, the score was 17-2, Padres.

As often happens in blowout games, the managers make wholesale changes. Regulars get a rest and bench players get a chance to shine (or show why they are bench players). This game was no different: Three Marlins and four Padres were replaced in the sixth inning. Perhaps discouraged by the state of the game, the Marlins went out 1-2-3 on eight pitches in the top of the sixth. In the bottom of the sixth, the substituted Padres (Brian Buchanan, Julius Matos, and Trent Hubbard) also went 1-2-3.

Peavy continued pitching in the seventh. Encarnación opened with a single but was erased at second when Homer Bush grounded to second. Bush was left at first when both Ramón Castro and pinch-hitter Tim Raines struck out looking. Vladimir Núñez took over the pitching for the Marlins in the home half of the seventh. Trammell singled for his fourth hit of the day, but that was all for the Padres: Cruz, Lampkin, and pinch-hitter Wil Nieves were out on seven pitches.

Peavy gave way to reliever Mike Holtz for the eighth with a win clearly in hand.6 Although Holtz walked Millar, he struck out the other three Marlins.

The Padres weren’t quite done with the scoring. Facing Armando Almanza in the bottom of the eighth, three of them flied out to center field, but Buchanan hit a “zero win probability added” homer to bring the score to the final 18-2, Padres.

The top of the ninth was fairly perfunctory: Jason Kershner needed just nine pitches for the inning, allowing only a single to Encarnación. One senses the Marlins might have been ready for the showers.

The Marlins won the next two games, the series, and the season series, but the fans present that day saw a memorable game.7

5 Darensbourg’s ERA increased to 6.14 in his next, and final, outing for the Marlins on August 27.

6 Maybe Peavy was a good-luck charm. The Padres scored 12 in the ninth inning of a September 12, 2004, game against the Rockies, and he was the pitcher of record in that game as well.