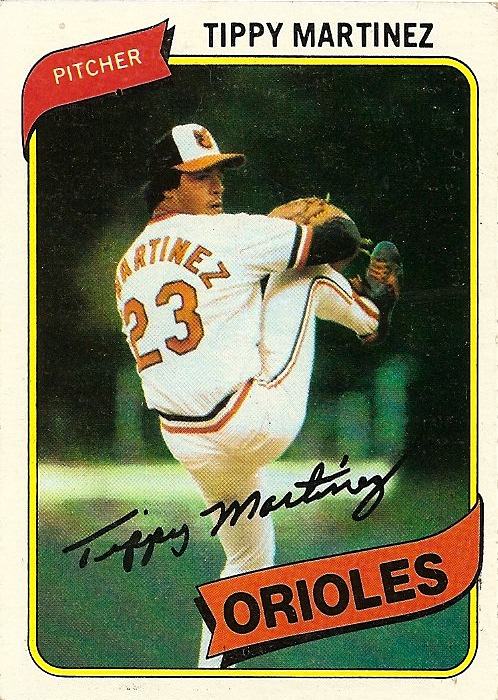 The 25,882 fans who ventured to Memorial Stadium in Baltimore on the evening of August 24, 1983, saw an exciting, extra-inning win by the home team in the midst of a tight pennant race. As a bonus, they also witnessed baseball’s version of The Twilight Zone.

The Orioles came into that Wednesday night game against the Blue Jays in second place, but just half a game behind Milwaukee. The Tigers and Blue Jays were only 1½ games out, while the Yankees trailed by a mere 3½ games. Only Boston (11 GB) and Cleveland (19½ GB) were out of the American League East race.

It was a typical hot summer night in Baltimore, and the game began in a typical fashion. A Garth Iorg sacrifice fly off Oriole southpaw Scott McGregor in the top of the third was matched by an Al Bumbry sacrifice fly in the bottom of the inning off Jim Clancy. A Todd Cruz error in the fifth gave the Blue Jays an unearned run and another sacrifice fly, this one off the bat of Buck Martinez in the eighth, put Toronto on top 3-1 heading to the bottom of the ninth. At this point the game began to morph into a bizarre sequence of improbable events that only baseball can provide.

John Shelby laid down a bunt single with one out, but Gary Roenicke, pinch-hitting for Rich Dauer, struck out looking. Lenn Sakata, who had entered the game in the eighth at second when Dauer moved from second to third, drew a walk. With left-handed hitting catcher Joe Nolan due up, Toronto manager Bobby Cox brought in lefty Dave Geisel. Oriole skipper Joe Altobelli countered with the last player left on his bench, the right-handed hitting Benny Ayala, who promptly singled to score Shelby. Al Bumbry followed with a single to score Sakata, and the game was tied. Joey McLaughlin then relieved for the Jays and struck out Dan Ford to send the game into extra innings.

Extra innings presented a problem, however. Todd Cruz and Rich Dauer, the starting third baseman and second baseman respectively, were out of the game. Catcher Joe Nolan, for whom Ayala had pinch-hit, had himself pinch-hit for starting catcher Rick Dempsey in the seventh, and Altobelli was now without either of his backstops. With little choice in the matter, outfielder Gary Roenicke went to third for his first ever appearance at the hot corner, John Lowenstein went to second base where he hadn’t played since 1975, and Lenn Sakata, who had gone to second when Dauer replaced Cruz at third, went behind the plate. As it turned out, it seemed not to matter who was where when Cliff Johnson crushed reliever Tim Stoddard’s first pitch over the center field fence for his 20th homer of the season. Stoddard then gave up a single to Barry Bonnell, and Tippy Martinez was brought on to face Dave Collins, who was pinch-hitting for Jesse Barfield.

Everyone in Memorial Stadium knew that the Blue Jays would try to run, and indeed the switch-hitting Collins stepped into the left-handed batter’s box against the left-handed Martinez in order to give Bonnell an even better chance of stealing. Martinez had only a fair move to first, but Bonnell took such a huge lead that he was easily picked off, although the out was officially recorded as a caught stealing since Bonnell continued to second, stopped and was tagged out by first baseman Eddie Murray.

Martinez walked the speedy Collins, who was as anxious to run as had been Bonnell. He was just as quickly picked off. Willie Upshaw then hit a bouncer behind second that Lowenstein fielded, but on which he could make no throw. Upshaw had barely taken his lead when Martinez picked him off first.

The fans were cheering wildly, but the Orioles were still down a run. The craziness, however, had just begun. Cal Ripken, who would be the Most Valuable Player that year, led off with his 18th homer—on his 23rd birthday—to tie the score off McLaughlin, who then walked Eddie Murray. Second baseman Lowenstein grounded to first, moving Murray to second and Bobby Cox ordered an intentional pass to John Shelby, then brought in Randy Moffitt to face Roenicke. Third baseman Roenicke struck out, bringing catcher Lenn Sakata to the plate. As befitting the night, Sakata launched a three-run, game-winning home run for a 7-4 Baltimore victory.

“Our strategy,” said Sakata after the game, “was to keep throwing to first until the lights went out.”1 An unlikely hero in a season filled with unlikely heroes for the Orioles, Sakata had been booed only the night before when he made two errors at second base.2

The victory proved to be the beginning of an eight-game winning streak that propelled the Orioles to the division crown and ultimately the World Championship. Milwaukee maintained its half-game lead over the Orioles with a 1-0, 14-inning victory over California that night, but Tippy Martinez was again the victor on Thursday evening against Toronto when Baltimore scored two in the bottom of the tenth to win 2-1. Mike Boddicker’s 9-0, three-hit shutout on Friday over the Minnesota Twins moved the Birds a half game in front of Milwaukee, establishing a lead they would never relinquish as they won the division by six games.

Despite regular catcher Rick Dempsey’s post-game remark that Sakata “looked good. I think he oughta start tomorrow,”3 the utility infielder appeared in only one other game during the win-streak, pinch-running for Rich Dauer in the top of the ninth in the Orioles’ 12-4 victory over the Kansas City Royals on August 30th.

This game marked Lenn Sakata’s only appearance in the major leagues as a catcher and that explains how Tippy Martinez became the only pitcher in big league history to pick off three runners in a single inning. Those pick-offs explain how Martinez retired none of the batters he faced yet got credit for one inning pitched and the win. Sakata’s second of three homers on the season explains how a Cal Ripken extra-inning, game-tying home run, on his birthday no less, didn’t make Jim Henneman’s Evening Sun game story until the fourteenth paragraph.

Perhaps the Orioles 1984 Press Guide said it best: “No one who was there or who listened to that game on the radio will ever forget it.”4

We never forgot it. Lying in bed listening through the ear-piece of a transistor radio, my wife already asleep, I was on a wild emotional ride as the Orioles tied it in the ninth only to fall behind immediately in the tenth. After Martinez’ second pick-off, however, I awakened my wife. “You gotta hear this! Tippy’s about to pick off his third runner in a row!” Sometimes Fate makes plain what It will do, and after Cal’s home run, it was clear that someway, somehow, Lenn Sakata was going to win that game. It took a long time to fall back to sleep.

In addition to the endnotes listed below, the author used box scores at Baseball-Reference.com and Retrosheet.org:

2 Bill Swaggerty, for example pitched six innings in his first big league appearance, helping to end the Birds’ second seven-game losing streak of the season. John Stefero, who amassed all of 14 plate appearances that year, had consecutive walk-off singles against Milwaukee on September 18 and 19.