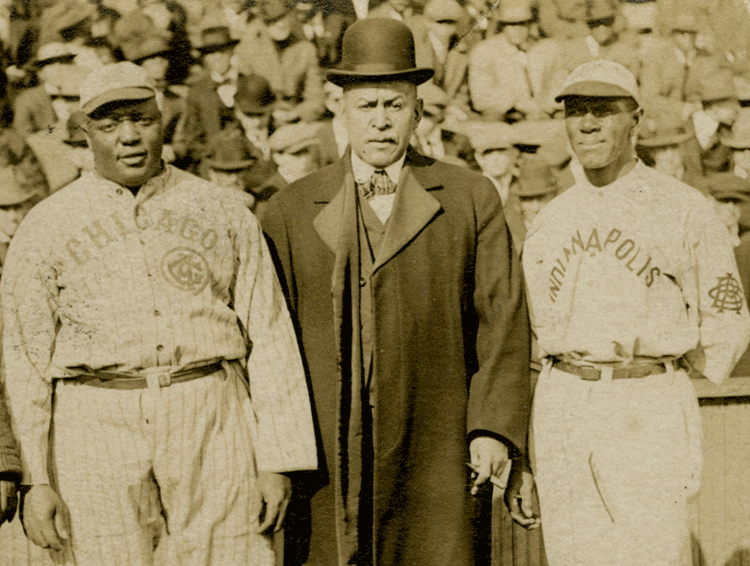 Rube Foster’s Chicago American Giants had been arguably the best team in Negro baseball since 1911, but C.I. Taylor’s Indianapolis ABCs were poised to overtake them in 1916. The rivalry was intense as the teams began a series in Chicago on Sunday, August 27, 1916. The “largest throng that has ever witnessed a ball game on a semi-pro lot” assembled at Schorling’s Park. The ballpark, called “the finest semi-pro park in the world” by Foster, was built on the site of the old South Side Park (the home of the Chicago White Sox until they moved to Comiskey Park in 1910).1 Many fans traveled from Indianapolis to root for the Bull Moosers, as they called their beloved ABCs.

Manager C.I. Taylor relied on two of his brothers in the infield: the power-hitting Ben Taylor at first base and Candy Jim Taylor at third. The ABCs’ Bingo DeMoss was the best second baseman in Negro baseball. At short was Morten Clark, nicknamed Specs for his eyeglasses. George Shively, known as Rabbit for his speed, played in left field; Oscar Charleston, an impressive 19-year-old, patrolled center field; and the veteran George Brown played in right. The battery was Dizzy Dismukes, a right-handed submarine-style pitcher, and backstop Russell Powell.

Foster’s infield was anchored by shortstop John Henry Lloyd, regarded by many as the greatest player in Negro baseball. Leroy Grant, Harry Bauchman, and Bill Francis handled first, second, and third base, respectively. The talented Pete Hill covered left field; the fleet Jesse Barber occupied center field; and Frank Duncan was stationed in right. Pitching for the American Giants was Frank Wickware, a tall right-hander with overpowering stuff. His batterymate was the veteran Bruce Petway, the finest defensive catcher in Negro baseball, renowned for his rifle arm.

Umpire Ed Goeckel was white and well known in Chicago semipro baseball. The no-nonsense arbiter, who threw the legendary Cap Anson out of a semipro game in 1909, served as a Federal League ump in 1914.2

The American Giants jumped to a quick lead by scoring three runs in the bottom of the first inning. Hill and Lloyd drew walks from Dismukes; Francis was safe on an error by Clark, scoring Hill; and Grant singled over second base to drive in Lloyd and Francis.

Dismukes settled down after the shaky start, and he and Wickware delivered one scoreless inning after another with the help of stellar defense. Brown made a running catch of Hill’s drive to right field in the third inning, and Lloyd deftly handled a wicked grounder from DeMoss in the fourth. Shively hauled in Duncan’s blast to deep left field in the fifth, and Lloyd made two more fine plays in the sixth, earning an ovation from the fans. Hill caught two fly balls in left field in the seventh, and Barber stole a hit from Charleston in the eighth with a spectacular running catch in center field.

Through eight innings, the American Giants had three runs on four hits, and the ABCs had no runs on one hit,3 but the visitors threatened in the ninth. Shively led off with a single on a bad-hop grounder to Francis at third base, and DeMoss followed with a single over second base. Jim Taylor advanced the runners with a sacrifice bunt, and his brother Ben was beaned by Wickware, loading the bases. The crowd was on its feet.

Bauchman, the second baseman, misplayed Clark’s grounder and everybody was safe, as Shively came home with the first ABC run. The score was now 3-1, and with one out the ABCs had the bases loaded: Clark on first base, Ben Taylor on second base, and DeMoss on third.

With one ball and two strikes on Powell, Wickware threw a pitch that catcher Petway dropped. The ball rolled a short distance away, but Petway retrieved it quickly. He noticed Taylor off second base and rifled the ball to Lloyd, who tagged Taylor for the second out. Lloyd, seeing that DeMoss had drifted off third base, whipped the ball to Francis. The ball bounced away from Francis, though, as DeMoss slid into the bag. DeMoss sprang up and ran for home as Francis went to retrieve the ball. Francis fired it to first baseman Grant, covering home. As DeMoss slid feet-first into home plate, he collided with Grant, and the two rolled in the dirt. Grant held onto the ball, and Goeckel yelled, “Out!” Enraged by the call, DeMoss struck Goeckel in the face! The American Giants quickly surrounded the ump to protect him from further harm.

In October 1916 the ABCs won four of five games from the American Giants in Indianapolis and proclaimed themselves the new champions of Negro baseball. Foster, of course, disputed that claim.4

The author relied on the game description given in the September 2, 1916, issue of the Chicago Defender. Background information about the players was obtained from James A. Riley’s Biographical Encyclopedia of the Negro Baseball Leagues (New York: Carroll & Graf, 1994).