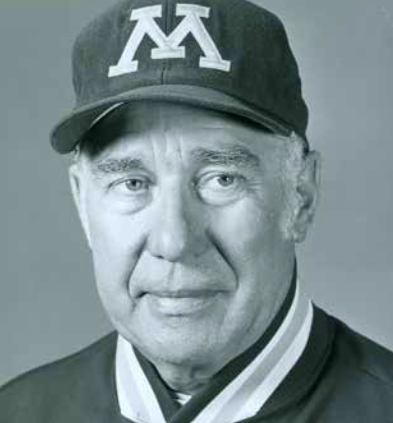 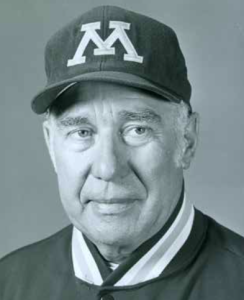 The ballpark didn’t receive any gifts that night, but all the players and team staff members did, with such goodies as a box of fishing plugs (given to manager Eddie Stanky), an electric frying pan (Ed Bressoud, Ozzie Virgil), socks (Dick Strahs), and a steam iron (business manager George Brophy).2 That was part of a 90-minute pregame show that included a celebrity slow-pitch softball game (in which Minneapolis Lakers basketball great George Mikan hit a home run), a 100-yard race between Millers outfielder Gil Coan and a horse (given a 20-yard head start, Coan held on to win), an exhibition by golf trick-shot artist Chuck Lewis and his daughter Linda, an award of a plaque to Dick Siebert, coach of the University of Minnesota’s 1956 College World Series champions, and the presentation of a $1,000 savings bond to Patricia Healy in honor of her winning essay in the “Name-the-Stadium” contest.3 One event had to be called off: Millers catcher Vern Rapp was slated to try to catch a baseball dropped out of a Navy helicopter from 600 feet above the field, but the chopper was sidelined with “motor trouble.”4

One of the pregame events went into the history books, if only briefly, as Millers outfielder Don Grate extended his own world record for the longest baseball throw.

Grate was a two-sport star at Ohio State during World War II. He was twice named second-team All-America in basketball and was selected for the 1944 US Olympic team (although the Olympics were canceled because of World War II). He also played baseball for the Buckeyes and signed with the Philadelphia Phillies after his junior year in 1945, going straight to the big leagues as a pitcher.

Grate was hit hard in his first two appearances in the majors and was sent to the minors, but he returned to the Phillies in September and got another call-up in September 1946. In what turned out to be his final big-league appearance in 1946, “something snapped” in his pitching shoulder.5 He bounced around the minors for four years after that, then got a job as a high-school teacher and basketball coach and filed his voluntary retirement from baseball.

But Grate changed his mind and gave baseball another shot after the school year ended, when he was acquired by Chattanooga of the Southern Association. Not long after joining the team in 1951, he asked for a chance to play the outfield, and when he hit two inside-the-park home runs in his first game in the garden, his days on the mound were essentially over.6

Despite the injury that diminished his pitching ability, Grate still had a fine arm, which he showed off before Chattanooga’s final game of the season in 1952. In a pregame exhibition he made a throw measured at 434 feet, 1 inch, the longest ever recorded. And he extended his record the next year with a heave of 443 feet, 3½ inches.

Grate spent five seasons in Chattanooga before moving up to Louisville of the American Association in 1956. In June of that year he was traded to Minneapolis, and on August 27, his 33rd birthday, the Millers gave him a chance to break his own record again.

“Tell the folks I can’t be sure [about breaking the record],” Grate told the Minneapolis Star. “I’ve been pitching a lot of batting practice lately and working off that mound is very different from the outfield throw.”7

The center-field fence was 405 feet from home plate. A gate in the wire fence was opened to give Grate a six-step running head start on his throws. “Don fired two almost to the stands,” Halsey Hall wrote in the next day’s Minneapolis Star. “And then he hurled one that landed in Chuck Lewis’ golf bag dead against the box seat backstop.”8

The throw was measured at 445 feet, 1 inch – a new record. But the fact that it landed in the golf bag may have kept it from going even farther. “That [throw] hit eight or ten feet up on the backstop,” Grate said years later. “They only measured it to the bottom of the backstop. You should probably add another 10 or 15 feet to it.”9

Grate may have been exaggerating how much farther his throw would have gone, but for the rest of his life he remained convinced he was the rightful holder of the longest-throw record, even after another American Association outfielder, Glen Gorbous, broke the mark by 9 inches with a throw of 445 feet, 10 inches in Omaha on August 1, 1957. (No one has attempted to top Gorbous’s record since.) “I felt I threw it further even though it wasn’t the official record,” Grate said in 2006.10

For the record, Don Grate’s gifts on “Appreciation Night” were slacks and walking shorts.

Once the golf bag and the horse and the frying pans had cleared the field, the 10,620 fans settled in to watch the Millers’ Roger Bowman pitch a five-hit shutout in a 2-0 win. Bowman, a 29-year-old veteran with 50 major-league appearances under his belt, had been purchased from Buffalo of the International League two weeks earlier.11

“I did that the hard way,” Bowman said. “Seemed like I was always behind the hitters three and nothing and three and one [he walked four in the game].” He primarily threw his curveball and slider: “I could count the fastballs I threw on my two hands.”12

The Millers scored twice against Omaha’s Ed Mayer. Singles by Gail Harris and Willie Kirkland and a sacrifice fly by Jake Jenkins produced the first run in the second inning. Then in the fifth, Bowman led off with a double, moved to third on a single by Wayne Terwilliger, and scored on a single by Rapp, pinch-hitting for Coan.

The Cardinals brought the tying run to the plate in the ninth inning, but the Millers’ third double play of the night ended the game. That put the Millers two games ahead of Omaha for third place in the American Association, although that lead soon disappeared; Omaha went 11-3 the rest of the way to finish third, and the Millers were 6-10 down the stretch.

Game stories from the Minneapolis Tribune and Minneapolis Star were accessed via Newspapers.com. The author has written more about Don Grate in a blog post, “The history of the record for baseball’s longest throw, a tale that involves John Hatfield, Honus Wagner, Sheldon Lejeune, Hugh McMullan, Don Grate, Rocky Colavito and Glen Gorbous, among others” prestonjg.wordpress.com/2009/12/04/the-history-of-the-record-for-baseballs-longest-thrown-a-tale-that-involves-john-hatfield-honus-wagner-sheldon-lejeune-don-grate-rocky-colavito-and-glen-gorbous-among-others.

4 “Grate Breaks Own Baseball Toss Mark,” Minneapolis Tribune, August 28, 1956: 14. The helicopter stunt was an attempt to break a record set in 1908, when Gabby Street of the Washington Senators caught a ball that was thrown from the top of the Washington Monument, 555 feet high.

8 Halsey Hall, “Grate Was Set to ‘Try for 400.’” Hall also contributed to The Sporting News, and in the September 5 issue of that publication he wrote that Grate made five throws before breaking the record. Halsey Hall, “Grate Throws Ball 445 Feet, One Inch to Set New Record,” The Sporting News, September 5, 1956: 30. Hall also served as master of ceremonies for the “Appreciation Night” proceedings.

10 Kevin T. Czerwinski, “Chattanooga Outfielder Had Grate-est Arm.” milb.com/news/minor-leaguer-don-grate-had-historically-great-arm-311376544. This post is dated November 1, 2019, but it’s a repost of a story that was first posted in 2006, when Grate threw out the first pitch at a Florida Marlins game on the 50th anniversary of his longest throw; note that Grate, born in 1923, was referred to as being 83 years old. Grate had lived in Miami since 1963 and died in 2014.